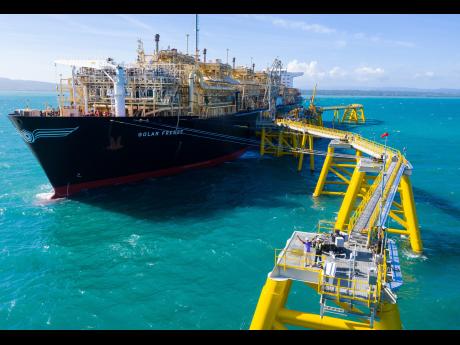 New Fortress Energy, which commissioned its natural gas floating terminal off the coast of Old Harbour on Friday, plans to increase its gas output fivefold at the facility by year-end.

The American company started pumping gas at the Old Harbour terminal in March and expects to reach full output by next year, according to New Fortress’ market filings.

The Floating Storage Regasification Terminal cost US$86 million, according to filings. It comprises an erected terminal roughly four stories above the waves, with a large ship affixed. That vessel called the Golar Freeze will remain largely affixed to the dock, but moved during storms.

Up to June, the Old Harbour terminal was producing 93,000 gallons of gas per day. By December that figure should grow to 500,000 gallons and then level of at some 744,000 gallons per day by next March.

At its operations in and outside Jamaica, New Fortress’s total output is 500,000 gallons per day, divided between its Miami facility at some 11 per cent, Old Harbour at 18 per cent and Montego Bay at 70 per cent.

The energy currently has other facilities under development. Within a year, it will commission its Puerto Rico operations, which is slated to account for 38 per cent of total output, followed by Old Harbour at 30 per cent, Montego Bay at 18 per cent and new operations in Mexico at about 10 per cent.

The Old Harbour terminal forms part of plans to get more than one-third of Jamaica’s energy plants to run on cleaner natural gas fuel and renewables such as wind and solar, by 2020.

“Today we celebrate, as we are on track to achieve this ambitious goal,” Prime Minister Andrew Holness said at the commissioning of the regasification terminal on Friday offshore Old Harbour.

The terminal’s pipeline is concealed and run along the sea floor for 3.6 miles towards Old Harbour. The pipeline links to Jamaica Public Service Company’s upgraded power plant in Old Harbour, which converts the gas to electricity. A second pipeline is being constructed to run towards the Rocky Point area of Clarendon to feed the Jamalco alumina refinery.

Holness said the project demonstrated that Jamaica can facilitate investments to modernise the energy infrastructure, while also taking into account the cost of energy to consumers, and climate concerns.

“Jamaica suffers the effects of climate change and we have to be environmentally conscious. We have to be an example for the rest of the world,” the PM said.

Politicians, technocrats and other guests at the event were ferried to the regasification terminal in small boats by the JDF Coast Guard. The waters were choppy and by mid-day, the waves were crashing over the bow of the boats. The turbulence experienced in boarding the terminal was in stark contrast to the stability of the Golar Freeze vessel, which never swayed during the commissioning ceremony.

The Freeze entered Jamaica’s waters in December. New Fortress has chartered the vessel for at least 15 years but with an opt-out clause after the first three. In the event that New Fortress wants an alternative regasification solution at the three-year period, Golar said in market filings that it has the option to match other offers.