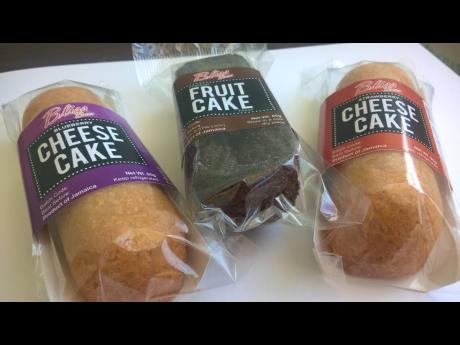 Bliss cakes, in two varieties, made by Great Foods and Desserts Limited.

A Jamaican company which began producing desserts under the name Bliss cakes and bars seven years ago has asked the Jamaica Intellectual Property Office, JIPO, to revoke the trademark registered by Caribbean Brands International Inc, a Barbados-based affiliate of the Jamaica Biscuit Company, which has been selling cakes with the same name for two years.

Director of Great Foods and Desserts Limited, Raphael Satchell, says that since 2012 he has operated a business producing and selling four flavoured cheesecakes in a canoe-shaped shortbread cookie crust under the name Bliss. A fruitcake was later added to the line-up.

According to documents obtained by the Financial Gleaner, Satchell said he registered the business name with the Companies Office in September 2011, believing that would protect the product name.

Satchell could not say precisely what the size of the market was for the products up to the time the Biscuit Company entered in 2017. However, by then his products was reaching what he said was a significant portion of the local market, having being widely featured in various sections of the media and by then being sold in more than 20 supermarkets and other retail outlets across Jamaica.

In November 2017, five years after he began operating, Satchell said he filed an application with JIPO to register the mark Bliss Bar and logo, but received a potential rejection correspondence in April 2018. That’s when he learnt that another Bliss had entered the market.

In that correspondence, JIPO advised that Caribbean Brands International had registered the trademark BLISS with respect to cake products, through an application filed on September 26, 2017.

He said that thereafter, the Jamaica Biscuit Company began to market a product that is similar to Great Foods’ Bliss cake.

Satchell is contending that to the best of his knowledge, neither Caribbean Brands International nor the Jamaica Biscuit Company had used the name Bliss in Jamaica in relation to cake products prior to his company’s extensive use.

He has formally requested that JIPO reverse the registration. Satchell’s attorney, Marc Ramsay, said last week that a date for JIPO to hear the case is yet to be is yet to determined. However, he said other options are being explored, including a lawsuit in the Supreme Court.

Shoucair said the BLISS miniature cake has been positively received by the local market and enjoys a competitive market share in comparison with other products manufactured at Kiss Baking.

As of May 2019, sales of the vanilla and blueberry flavours of BLISS topped 4.4 million units combined and brought in net revenue just shy of $100 million for Kiss Baking, according to Shoucair’s declaration.

He said the BLISS cake product has exhibited significant sales growth since the launch of the vanilla flavour in November 2017 and the blueberry flavour in September 2018.

As at April 2019, the company had temporarily discontinued the blueberry flavour and launched a twin-pack BLISS.

Shoucair said the average monthly sales of the vanilla flavour ranges between J$2.37 million and J$3.93 million, and represents 7.2 per cent of Kiss Bakings revenue.

He said the assessment of sales volume and communication audits indicate that the BLISS trademark enjoys an established reputation and considerable consumer brand recognition since entering the Jamaican market; and, further, that the company had no knowledge of Great Foods’ products before the filing of the application JIPO to invalidate the BLISS registration, and have not been able to locate Satchell’s products on the market.

Grace Lindo, the attorney representing the Jamaica Biscuit Company and Caribbean Brands International, said it would be inappropriate to comment on the case, saying “the matter is set for hearing before the tribunal at JIPO”.

Dr Marcus Goffe, the deputy director and legal council at JIPO, when asked whether the copyright agency had ever ruled in favour of a trademark invalidation under similar circumstances to the Bliss dispute, basically said each case is decided on its own merit.

The Registrar of Industrial Property is the first line of dispute resolution in such matters, and if the parties are not satisfied they can go to the Supreme Court, Goffe said.