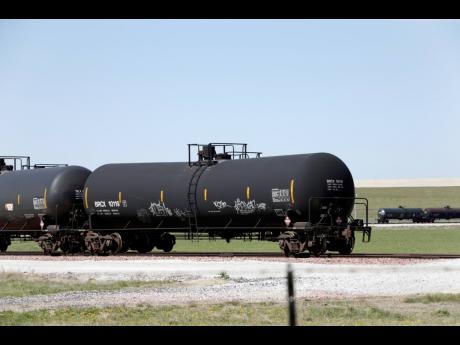 AP
AP Ethanol train cars wait outside the Southwest Iowa Renewable Energy plant, an ethanol producer, in Council Bluffs, Iowa, Tuesday, April 21, 2020. The ethanol industry is under pressure after low oil prices and a coronavirus-related decline in travel cause demand for the fuel to plummet.

HISTORY IS like fashion: it is only a matter of time until the out-of-fashion comes back into vogue.

Who would have thought a year ago, that we would have violent swings in the equity markets, double-digit unemployment, negative oil prices, a global pandemic and mass graves in New York City?

A few years ago, Harvard University Professor Francis Fukuyama arrogantly proclaimed “the end of history”. Now, waiting for armies of locusts to run rampant and frogs to fall out of the sky are part of the ‘new normal’.

Some commentators claim that negative oil prices are without historical precedent. Unfortunately, they are wrong. We are just reliving the past. History is like a wheel going round and around.

The birth of the modern oil industry is considered to have occurred on the eve of the American Civil War, when entrepreneurs in Titusville, western Pennsylvania, drilled a well with the explicit purpose of finding oil.

The black liquid has been known to humanity since the start of time. Indigenous people around the world used it as a salve for wounds. Early European settlers who encountered the Seneca Indians in western Pennsylvania found that the tribesmen used the oil as a form of medication, and some traders began peddling their own concoctions, with the name mutating from Seneca Oil to ‘snake oil’.

Today, ‘snake oil salesman’ is a euphemism for a person who is as slippery as the industry.

Indonesian tribes used the black tar that seeped out of the ground for torches, and sailors often used it to seal their boats. Oil was considered more of a curse than a blessing, since it would sometimes seep into wells and spoil the water.

However, the appeal of oil began to rise as the Industrial Revolution began to gain traction during the 19th century. The mass production of oil lamps sparked enormous demand for whale blubber, which was boiled down to make a fuel that was used to light the night.

Oil whalers became the hedge fund boys of the 1800s, making massive riches along the way. The fortunes generated by the New England whaling fleets is what led to the industrialisation of the northeast and creation of huge financial empires. It also sparked a search for an alternate source of fuel.

Entrepreneurs found that if oil was refined, it would produce kerosene, a light fuel similar to whale blubber that would also work in oil lamps. Overnight, the drillers in Pennsylvania became famously wealthy. It was society’s determination to conquer the night that led to the birth of the modern oil industry.

However, one of the problems of oil wells is that once they begin to flow, they cannot be turned off. The success of the first drillers led to an invasion of wildcatters and speculators. Soon, so much oil was flowing out of the ground that there was no way to store it. Given that the boom towns were full of saloons, the drillers started storing the oil in discarded whiskey barrels ––which led to the commodity’s current unit of measure. Unfortunately, the supply of whiskey barrels soon ran out, and the drillers had no other choice but to let the oil run through the streets and into the creeks. Given that oil regulators will fine oil producers if they let their oil run out on to the ground, modern-day producers will pay for someone just to take it away. However, if the price becomes higher than the fines, they too will allow it to run into the open.

This characteristic of boom and bust is provided in excruciating detail in Daniel Yergin’s epic masterpiece, The Prize. The lack of coordination between producers in the oil industry always leads to overproduction. However, as prices plunge, firms go out of business. Investment collapses, and the excess supply is eventually absorbed by the market. Moreover, the low price leads to an increase in demand.

Yet, the enormous lag time between investment and production means that supply will not keep up and prices will soar into the stratosphere.

Therefore, the seeds of the next oil boom are being sown today with the evaporation of oil prices. A whole generation of investors and speculators is being wiped out, as we speak, and the fracking regions will become wastelands.

Nevertheless, society’s need for oil will recover, and demand will eventually outstrip supply. This will lead to the start of a new cycle. In other words, the wheel will go round and around.