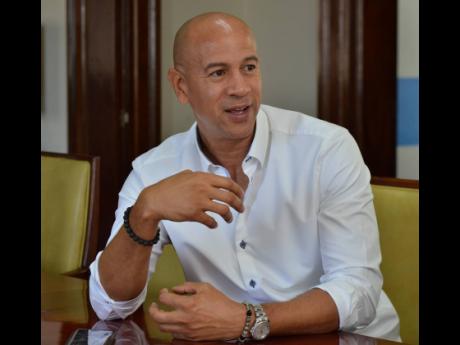 A plan put forward by CEO Zachary Harding for SSL Growth Equity Limited, which trades as SSL Group, to create a private equity subsidiary is now off the table.

Instead, SSL Group has announced the formation of a legally separate entity, Delta Capital Partners Limited, DeltaCap, under a deal that sees Harding and SSL founder Hugh Croskery partnering as equal owners of the new private equity outfit.

Harding took over as CEO of SSL Group last October after his own company, Hyperion Equity Inc, acquired a stake in SSL Group.

The closing of that transaction is still pending. However, Harding has been restructuring the operations of SSL Group to focus on core business – a programme that was to include the creation of the private equity firm, which already had 15 prospective deals in the pipeline, some of which were negotiated by Harding through Hyperion.

“The subsidiary is no longer on the table, we are not starting any more companies,” Harding told the Financial Gleaner.

The formation of DeltaCap means those private equity transactions which have been under review for about a year will no longer be financed through SSL Group.

Instead, SSL will now only act as arranger and broker in raising capital for the ventures being undertaken by DeltaCap.

“One feeds into the other. DeltaCap will have the private equity deals and SSL, as the brokerage, will lead the fundraising efforts for DeltaCap and will get paid for doing that,” Harding said.

The SSL Growth Equity family is made up of four companies – SSL Asset Management Limited (Cayman); SSL Capital (Cayman) Limited; SSL Jamaica and its listed subsidiary SSL Venture Capital Jamaica. Through SSLVC, the group backs start-ups with equity injections ranging between US$250,000 and US$1 million.

DeltaCap is looking to take anywhere between a five per cent and 51 per cent stake in larger ventures with better cash flows and the potential to scale-up, than those targeted by SSLVC. DeltaCap also plans to be more actively involved in the day-to-day operations of the businesses.

The transactions under review spans fintech, food and beverage, agro-processing, real estate, technology, video surveillance systems, infrastructure development, health and wellness, healthcare and media industries. The size of the investments in the target companies would be about US$5 million on average.

“DeltaCap is looking to do no more than 20 deals at any one point in time. What we are trying to do is become the number one deal house in the Caribbean. We don’t have to have the largest deals, but we will seek to have the best deals that provide the highest risk-adjusted returns,” Harding said.

He wants to grow DeltaCap into a US$100-million firm over the next two years – which would equate to around US$5 million per target company – inclusive of a fintech business Harding hopes to launch by the first quarter of 2021.

The private equity firm is reporting progress on negotiations with half of the targeted ventures, and is expected to close its first deal in two weeks. Harding did not name the company but said the stake, which has been valued at US$2.4 million, has already been transferred to DeltaCap and the operating agreement signed.

“DeltaCap will invest in two ways: one is with companies that are already existing and profitable, and the other is through start-ups. But if we decide to invest in start-ups, we will only focus on ‘starts’ that DeltaCap itself has done from scratch and staffed,” he said. “So for the fintech space, we have a couple of businesses that we are going to launch.”

Harding will serve as executive chairman of DeltaCap, in addition to his role as Group CEO of SSL. He has named Ivan Carter, formerly the chief financial officer, CFO, of Sagicor Group Jamaica, as CEO of DeltaCap.

Anthony Dunn will serve as chief investment officer, and Nicki Franklin Grant as head of projects. Allison Hemmings will oversee all financial aspects of DeltaCap, in addition to her role as CFO for SSL Group, while Sonia Nicholson will be DeltaCap’s head of compliance.

DeltaCap’s board of directors is made up of Harding; Managing Partner of Lex Caribbean law firm Melanie Jones; Director of Economics at the Caribbean Development Bank, Dr Justin Ram; and Sarah Meany, the director of private wealth management and client services at SSL Group.