Restructuring of NIS seen as fix for sporadic pension savings 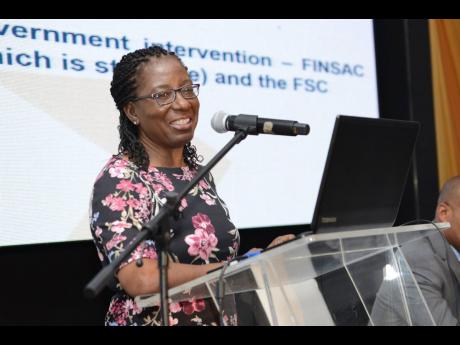 Approved retirement schemes, or ARS, which were crafted as a solution to bringing more Jamaicans into the pension net, have performed at less-than-desirable levels largely due to infrequent and small savings by subscribers to such schemes.

That is estimated to be roughly 10 per cent of the employed labour force. Of the total active membership, ARS participants account for approximately 48 per cent, while the other 52 per cent hold membership in superannuation funds.

The low pension coverage is grim, especially within the context of a five-year analysis of the market, over which time 32 pension plans have been wound up. It’s an issue that actuary Constance Hall and primary spokesperson for the private pension industry, Sanya Goffe, believe can only be solved through a revamping of the National Insurance Scheme, NIS, or by understudying the recently introduced Tourism Workers Pension Scheme, as a catalyst for a micro-pension sector.

“The way to provide meaningful pensions to poor people, which is largely what we have in Jamaica, has to be through a sensible social security system, which is our NIS. The NIS works because everybody, the high-paid earners, low-paid earners, we all put our money into the same fund and, essentially, the higher-paid earners are subsidising the lower-paid earners,” said Hall, principal actuary at Eckler, at a Gleaner Editor’s Forum.

“At the end of the day, so long as we all contribute for the same 35 years, we get out, essentially, the same pension and it allows the poor persons to retire with something that’s meaningful. If we are ever going to solve the pension crisis in Jamaica, we have got to make the NIS work,” the consultant said.

Goffe, an attorney by profession, who is president of the Pension Industry Association of Jamaica, PIAJ, on the other hand, has pitched arguments around tailoring the micro-pension scheme to fit into the NIS infrastructure as the way forward. Goffe also sits on the Investment Management Review Commission, which was established to review the National Insurance Fund’s, NIF’s, investment management governance framework. The NIF is the pension fund manager for NIS contributions, which has about $135 billion under management, based on the last projections seen by the Financial Gleaner in the Jamaica Public Bodies reports tabled in Parliament.

“While I eagerly anticipate the findings from the consultant that the FSC has recently engaged to look at micro pensions, I’m of the view that adopting a nationwide model, where we max out the NIS, is the best way to do it,” Goffe said at the forum.

She argued that recent recommendations put forward by the review commission to the minister of finance, among other social security protection efforts such as the tourism pension scheme and the micro pensions project, offer the opportunity to restructure the public pension system.

“If the recommendations are adopted, we can look at how we can tailor-make a micro pensions aspect to fit into the NIS,” Goffe said.

Hall and Goffe were two of five experts at the forum on the future of Jamaica’s pension industry, the other three being Conroy Rose, CEO of Victoria Mutual Pensions Management Limited; Candace Villers, assistant asset manager at Sagicor Group Jamaica; and Lotoya Mayhew Kerr, vice-president at Sagicor Group.

The NIS is funded by contributions from workers and employers It’s administered under the National Insurance Act. Contributions to the scheme are compulsory – effective April 1, employees pay over 3 per cent of their salary, and their employer matches that with another 3 per cent.

The NIS, as a social security scheme, offers financial protection to contributors and their families against loss of income arising from injury on the job, incapacity, retirement and/or death of the insured.

Last year, the number of active private pension plans in Jamaica fell 10 per cent to 379, while pension coverage remains lows at 10 per cent of the employed workforce.

Hall is wary of the new efforts to expand coverage through yet another programme, saying initiatives tried in the past have yielded little. The failing she sees is the lack of a structured campaign that leads to a culture shift – one that drives home to Jamaicans why it makes sense for them to set aside funds from their already-low incomes as future security.

Employers are not mandated to set up pension plans for their employees. For the 379 that currently do, it’s a choice they made as protection for their staff. Approved retirement schemes, which are offered by investment houses, were introduced under the Pensions Act of 2004 as an alternative for workers without access to a superannuation scheme at their place of employment.

However, Hall says participation in such schemes are below expectation.

“The problem is, employers are, by and large, not contributing to the approved retirement schemes. Employer contributions are sporadic, so they make a payment here and there, and there isn’t a payment again for a while. So, if we drill down to the persons who are actually contributing month by month into a pension arrangement, it’s significantly less than the 10 per cent that we think we have,” the actuary said.

“So now we are looking at adding to that– micro pension. It’s a wonderful idea, except that this is going to be another situation where a person is going to voluntarily put some money into a pension arrangement. But based on how approved retirement schemes are doing, we can imagine that the contributions are going to be sporadic, and they are also going to be very small,” she said.

Of the 379 active pension plans, 13 are operated as retirement schemes.

By design, the schemes offer greater flexibility than superannuation funds, in which membership is limited to employees whose employers are willing to take on the various legal and administrative costs associated with such funds. The employer matches the contributions of employees to the scheme, subject to a legislated cap.

Retirement schemes, while they allow for employer contributions on behalf of their employees, the firm can start and stop making payments at any time.

Data from the FSC showed that retirement schemes had an asset value of $50 billion at the end of December 2019, while superannuation funds had $640.5 billion under management, representing 93 per cent of the market.

“Very small contributions for retirement schemes and very small accounts mean very small pensions. Once again, we are going to count numbers, and we are going to tell ourselves that our coverage has improved; but we are still going to have 95 per cent of the population getting to retirement age and not having a meaningful pension,” Hall said.