PIOJ: Job recovery forecast at four times the pace of last crisis - Economy contracts by another 11% in Q3 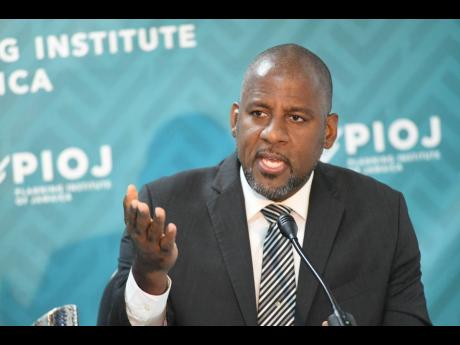 Job losses arising from the COVID-19 fallout are worse than the previous crisis in 2008, but recovery should happen four times as fast, according to Planning Institute of Jamaica, PIOJ, Director General Dr Wayne Henry.

That’s due to the improved macroeconomy, he said, while addressing his quarterly briefing held online. For the short term, however, many Jamaicans will need to find new forms of employment within a weak economy.

“We expect GDP to recover in three to four years, and two to three years recovery for jobs, compared to the crisis in 2008,” said Henry in response to a query on the outlook of the economy.

For July to September 2020, real value added, or GDP, was estimated to have declined by 11.3 per cent year-on-year. Over nine months, January to September, the economy has shrunk by an estimated 10.7 per cent.

Within the current review quarter, the services industry contracted by 13 per cent while the goods-producing industry contracted by 3.6 per cent. All industries within the services industry, with the exception of producers of government services, declined during the review quarter. The industries registering the largest declines were hotels & restaurants, down 63.8 per cent; other services, down 34.3 per cent; and transport, storage and communication, down 17.4 per cent.

Jamaica recorded inflation of 0.8 per cent for the month of October, reflecting higher prices for food and non-alcoholic beverages.

Based on Statin’s count as of July 2020, more than 135,000 jobs were lost over five months following the onset of COVID-19. That equated to an unemployment rate of 12.6 per cent, up 4.8 percentage points over last year. It’s the highest unemployment in years, with youth unemployment hovering at 30 per cent. During the 2008 crisis, Jamaica lost 90,900 jobs gradually over three years. It took eight years for employment and 11 years for GDP to rebound.

“So that tells you the severity of COVID-19 when compared with the previous economic crisis,” Henry said.

The increased joblessness is expected to lead many Jamaicans to find new methods of sustaining their lifestyles outside the formal channels. Jamaica, similar to other Caribbean countries, is characterised by a high degree of informality, said Henry.

“The informality doesn’t mean criminality,” he said, “but people hustling, who are not formalised.”

Henry said the PIOJ doesn’t track informality, but that technocrats generally cite the 2006 Inter-American Development Bank and University of the West Indies document which found that the informal sector accounts for 40 per cent of the official GDP figure.

Henry said the Jamaican Government continues to pursue methods to induce increased formality, including the COVID-19 relief sent through banking accounts. Additionally, Henry mentioned an ongoing project of the Government, in conjunction with the International Labour Organization, which started in 2015 to formalise workers in specific communities with the focus on fishers and domestic workers.