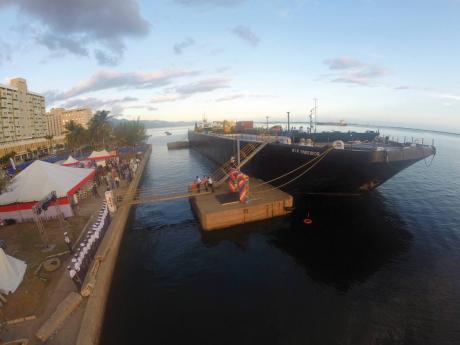 File
One of the barges owned by West Indies Petroleum is seen during its commissioning in Kingston.

West Indies Petroleum Limited (WIPL) has ousted two of its directors, each of which also owns 20 per cent of the bunkering company, but the company is refusing to clarify the fallout, even while issuing a press release about the dispute.

WIPL, which is in the business of refuelling ships both in port and at sea and the large-scale supplier of fuel, is privately owned, and therefore had no obligation to go public with the board changes.

Chairman Gordon Shirley told the Financial Gleaner that he had no further comment beyond the short statement released on Sunday afternoon, which noted that there was “a difference of opinion regarding the direction of the company” and that Courtney Wilkinson and John Levy were no longer directors.

“The development where both Messrs Levy and Wilkinson’s tenure as members of the board came to an end was taken during a recent extraordinary general meeting of the company. Wilkinson and Levy remain shareholders of WIPL,” it said.

“WIPL remains a stable entity which continues to proceed strongly on the path to growth and expansion, while operating on principles of transparency, credibility and probity,” read the final of the three-sentence release.

Wilkinson, who is also CEO of ALCOR Windows and Doors, confirmed the ouster, saying both he and Levy still retain their shares, amounting to 20 per cent of the company for each, but that he would reserve further comment for now.

Asked about that last comment in the WIPL statement, Shirley said it was not an indication of impropriety, while noting he would say more later in writing.

The chairman is also a shareholder of WIPL, as is Gerald Chambers and Tarik Felix, according to Companies Office records.

The bunkering company operates in a market with only three players, the others being Scott Petroleum and Bunker One (Jamaica). WIPL owns two barges – WIP Endeavor with a capacity of 45,000 barrels, and WIP Jam One with a capacity of 22,000 barrel – that are used to fuel to near-shore ships or those docking at any one of Jamaica’s nine ports.

In July 2016, the company acquired the former ethanol production facility, JB Terminal Port Esquivel Limited, from Jamaica Broilers Group for US$4 million. It also took over US$18.5 million of debt. The JB Terminal acquisition gave WIPL 600,000 barrels of additional capacity, and positioned it to go after even more business.