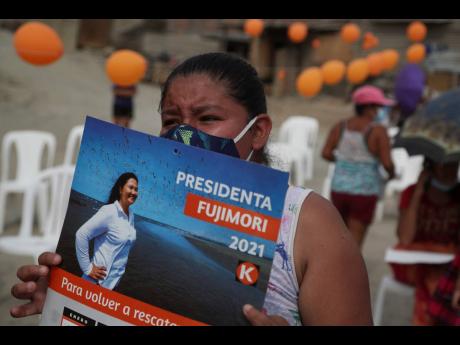 AP
A supporter of presidential candidate Keiko Fujimori, of the Popular Force party, holds a calendar sporting the candidate’s photo during campaigning on the outskirts of Lima, Peru, on March 16, 2021.

The presidential elections in the Andean countries of Ecuador and Peru on April 11 took an unexpected turn.

In Ecuador, Guillermo Lasso, a seasoned banker with strong economic credentials, trounced Andres Arauz in the second round of voting. The results flew in the face of the polling data, which had Arauz leading by a healthy margin.

The interesting thing was that the third-place candidate, the indigenous environmentalist Yaku Perez, had recommended his followers to cast a blank vote. However, it seems that the very high level of indecisive voters turned in favour of Lasso.

In reality, Arauz was a newcomer to the Ecuadorian political scene. He is 36 years old and completed a bachelor in economics at the University of Michigan. He is a close follower of former President Rafael Correa, and held several important positions in his administration. Many considered him to be a Trojan horse for the former president, who is exiled in Brussels.

The canny operator tried a couple of gimmicks, including promising US$1,000 payments for needier individuals, and encouraging them to register on his campaign website. Although no candidate won a clear majority during the first round of voting, Arauz led with more than 13 points.

Guillermo Lasso narrowly squeaked past Yaku Perez and made it into the second round. Most pollsters projected an Arauz victory. However, they also noted a large number of undecided voters. As the final date arrived, Lasso turbocharged his campaign by embracing social media formats, such as TikTok, and using a more modern and inclusive rhetoric.

At the same time, Arauz could not shake the shadow of Correa, a divisive and polemic figure. When questioned about the former president, he would always rise to his defence. Meanwhile, Lasso stopped attacking or mentioning him. It was a brilliant change of strategy. As a result, Lasso won by a sufficient margin for Arauz to acknowledge defeat.

The newly elected leader vowed to continue with the country’s dollarisation and meet most of the demands set by the International Monetary Fund. He said he would introduce a major tax reform on his inauguration day. As a result, Ecuadorian bond prices rallied an unprecedented 13 points at the open, as short-sellers rushed to cover their positions.

Further south, many people in Peru were shocked when Pedro Castillo emerged as the leading candidate in the first round of the presidential elections. The current tally shows Keiko Fujimori, the daughter of former President Alberto Fujimori, to be in second place.

Given that no candidate won more than 50 per cent of the vote, the two leading contenders will head for a run-off on June 6.

Yonhy Lescano, the candidate who was leading in the polls, came in fifth place.

The results produced a strange slate of possibilities. Castillo is a leftist academic and labour organiser, with an authoritarian bent. He advocates the nationalisation of key industries which have seen an inordinate concentration of power. Keiko Fujimori is a polemic and divisive figure, but with a loyal party structure behind her. However, she will maintain the country’s economic status quo.

Traditionally, Lima has been the kingmaker in the country’s presidential elections, and it tends to vote centre-right.

It is important to note that Peru is one of the strongest economies in Latin America. It is well diversified, and has impressive credit metrics. The central bank is independent. The currency is stable and inflation is low. The financial sector is also well regulated and capitalised.

However, there are problems. There is a great deal of income inequality. This is partly due to a lack of competition in strategic sectors, such as electricity, banking and gas.

The government has also been struggling to bring COVID-19 under control. Peru has one of the highest COVID death rates in the world. Overcrowding in the slums that surround Lima and the slow arrival of vaccines are some of the reasons for the high infection rate.

Therefore, it is not surprising that a leftist candidate made it to the second round. Nevertheless, it appears that Fujimori will be a tough opponent to beat.

The elections in Ecuador and Peru perpetuate a trend that has been seen around the world. Polls are poor indicators of future outcomes. From the Brexit referendum to the United States presidential election in 2016, to the 2019 PASO in Argentina, the polls failed to project the results.

Analysts are scrambling to find an explanation. There are suggestions that there is an over-reliance on the use of fixed telephone line polling, which distorts the sample set. Some analysts argue that respondents lie during interviews or hide their true intents. Others point to a high number of undecided voters, as well as a large percentage of voters who change their mind on the eve of the election.

Whatever the case, polls provide little insight into what will happen on election day.