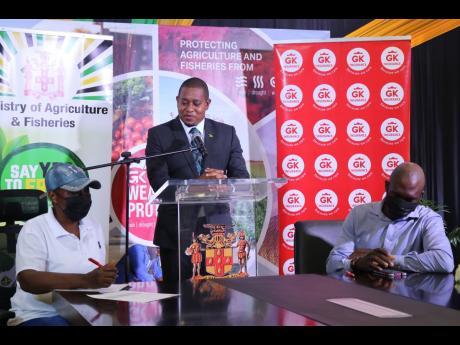 Minister of Agriculture & Fisheries Floyd Green observes as farmers Novelette Headlam (left) and Jhavaney Nicholson (right) sign up for crop insurance coverage from GK Insurance at the launch of GK Weather Protect microinsurance policy held at the ministry’s Hope Gardens offices on July 20, 2021. The policy provides coverage to farmers and fishers for losses from heavy rain, hurricane winds and drought.

The editors of this newspaper should be heartily congratulated. The content that they publish appears customised for me. They are also timely and high-quality stuff.

A recent article, ‘The rich world’s debt to islands like those in the Caribbean’ – written in sharp contrast to calls for reparation – should be required reading for policymakers, insurance company board members, and other officials. Two eminent authors argued that SIDS, that is, small island developing states, such as Jamaica, face ‘structural vulnerabilities’ due to their small populations, higher shipping costs, and geography.

”SIDS have extraordinary environmental vulnerabilities and face special risks, including food insecurity,” they wrote. “In a large country, a disaster like a hurricane or a drought usually affects only one region directly; but in a small island nation, the disaster often hits most or all the country simultaneously, straining both the emergency response and the costs of economic recovery. Moreover, acute dependence on food imports has left many SIDS with epidemics of diabetes and obesity – a problem that should be regarded as an indictment of the global food industry and as a geographical vulnerability of these countries.”

Astute readers will see direct links between the preceding comments, life, health, and property insurances, news reports last week about the country’s catastrophe bond and the recently launched micro insurance plans for local farmers and fisherfolk. There is growing evidence that the ‘extraordinary environmental vulnerabilities’ and some of the special risks that face the island are now being recognised by local interests and that actions are being taken to mitigate them.

For example, this newspaper reported last Thursday that transport operators have restarted the conversation about setting up a motor insurance company and a bank. They are also lobbying the authorities to increase the measly limits under the Motor Vehicles Insurance (Third-Party) Risks Act. Surprisingly, this item is missing from the Insurance Association of Jamaica’s agenda.

I explained in an October 27, 2019, article that a catastrophe bond, also called a cat bond, is a financial instrument that was invented during the 1990s. It pays the issuer – in this case, the Government of Jamaica, via the Ministry of Finance – US$185 million when pre-defined disaster events occur. A Category 3 hurricane is an example of a disaster event or risk.

If the predefined event does not occur, the issuer gets nothing. These are features that are similar to those found in a typical insurance contract.

The World Bank – through the International Bank for Reconstruction and Development, or IBRD – priced a catastrophe bond that will provide the Government of Jamaica with financial protection of up to the US$185 million against losses from named storms for three Atlantic tropical cyclone seasons ending in December 2023.

Quite appropriately, the protection afforded by the bond became effective during the current hurricane season. The Government of Jamaica is the first government in the Caribbean region, and the first of any small island state, to independently sponsor a catastrophe bond.

The bond effectively transfers some of the natural disaster risks that the country faces to the international capital markets.

Jamaica’s cat bond is one part of a range of strategies that the Government employs to manage disaster risks. In previous years, the strategy appears to have been reactive. It was based on the hope that disaster events would not occur. If they occurred, the authorities would approach friendly countries for handouts – in diplomatic jargon, seek grants or concessionary flows – and, most surprisingly, to negotiate loans.

The leadership of the Ministry of Finance should be applauded for overhauling the Government’s risk transfer and financing strategy and taking proactive actions to minimise the vulnerabilities facing the country.

The persons who wrote the articles about the recently launched plans for farmers and fisherfolk for this newspaper, The Observer, and the Jamaica Information Service did not do justice to the story. They treated the plans like they were traditional insurance.

The schemes should be more accurately called microinsurance plans. More importantly, they were developed for a segment of prospective buyers that traditional insurance companies often ignore.

Microinsurance products or plans, according to Investopedia, offer coverage to low-income households or to individuals who have little savings. They are tailored specifically for persons with lower-valued assets. This arrangement aids low-income families by offering insurance plans tailored to their needs.

Microinsurance is often found in developing countries, where the current insurance markets are inefficient or non-existent. Because the coverage value is lower than the usual insurance plan, the insured people pay considerably smaller premiums, and the protection is limited to a standard amount.

Governments like microinsurance plans. This is because they shift the financial burden from the state to other actors in the market. One measure of their effectiveness will be how many uninsured persons sign up.

Technocrats in the Ministry of Finance and the Financial Services Commission, which regulates the insurance industry, would argue that the development and introduction of microinsurance products in the local marketplace is consistent with the Government’s financial inclusion strategy.

Financial inclusion is a key enabler to reducing poverty and boosting prosperity. Financial inclusion means that individuals and businesses have access to useful and affordable financial products and services that meet their needs – transactions, payments, savings, credit, and insurance – delivered responsibly and sustainably.

However, the Bank of Jamaica, BOJ, in its eight-page brochure outlining the rationale for the country’s National Financial Inclusion Strategy, inexplicably, focuses on ‘the underbanked’, completely ignoring the country’s extraordinary environmental vulnerabilities.

Happily, the insurance subsidiaries of the GraceKennedy group have ignored the BOJ’s faux pas. Bravo!