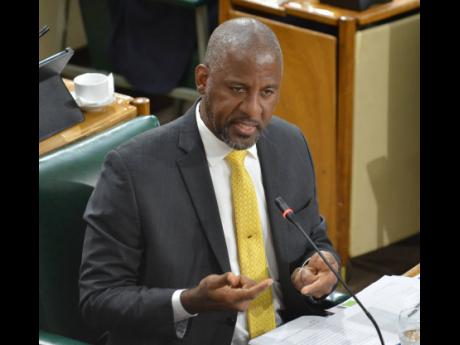 T he Jamaican economy expanded 12.9 per cent in the April-June quarter, reflecting one of its fastest growth rates, but it still trails pre-pandemic levels.

The growth largely reflects recovery from stiff lockdown measures imposed a year earlier to reduce the spread of the coronavirus, according to the Planning Institute of Jamaica, PIOJ, at its quarterly briefing on the economy on Thursday.

“Growth during the April to June 2021 quarter was spurred by the increased domestic and external demand for Jamaica’s goods and services, consequent on the relaxation of COVID-19 measures,due mainly to the increased roll-out of vaccinations globally,” said PIOJ Director General Dr Wayne Henry.

The quarterly growth still puts the economy below 2019 pre-pandemic levels, based on the deeper level of contraction in the 2020 corresponding quarter. Specifically, the economy declined then by 18.4 per cent, according to official data from the Statistical Institute of Jamaica, Statin, the final authority on economic gross domestic product estimates. The PIOJ wasn’t far off, having made a preliminary estimate of an 18 per cent contraction for that 2020 period.

Looking forward, the PIOJ expects the positive outlook to continue, with growth forecast within the range of 4.0 to 6.0 per cent for the current July-September third quarter. Additionally, the 2021-22 fiscal-year growth projections is within a range of 6-10 per cent.

The new variants of the virus and lockdown measures will pose challenges to that forecast.

“The recent implementation of no-movement days will temper some economic activity, but given the short duration, the negative impact on the economy is not expected to be significant,” said Henry at Thursday’s quarterly economic briefing.

A year earlier, the economy suffered from curfews and the targeted closure of COVID-19 hotspots, schools, hospitality businesses, and travel restrictions for a time. In 2021, the country benefited from increased operating hours for businesses, increased construction, improved weather conditions which facilitated growth in agriculture and utilities, higher levels of employment caused by lay-offs in 2020, and higher levels of business confidence, PIOJ said.

The economic expansion in April-June reflected growth in the goods sector, up 7.8 per cent, as well as the services sector, up 14 per cent. All industries grew, except mining, which declined by 12.3 per cent due to lower alumina and bauxite production. The construction industry grew by an estimated 18.3 per cent, reflecting higher levels of activity in both building construction and other construction components.

He added that the National Works Agency disbursed $7.1 billion, or 144 per cent more than the previous year’s quarter, towards continued works on the Yallahs to Harbour View leg of the Southern Coastal Highway Improvement Project.

Additionally, during the quarter, the National Road Operating and Constructing Company Limited disbursed $3.1 billion, relative to $148.5 million a year earlier, for work on the May Pen-Williamsfield component of the toll highway. And utility provider Jamaica Public Service Company disbursed $2.2 billion to build out its power plants and improve its line distribution network.

Turning to the services sector, the largest upswing related to hotels and restaurants, which grew over 330 per cent, reflecting a sharp increase in visitor arrivals relative to the 2020 period when movement across the border had been restricted, decimating the travel market.

“Stopover arrivals for April-May 2021 increased to 205,244 visitors, compared with none during the corresponding period of 2020,” Henry said.