Hotel Four Seasons on the market for $2.5b 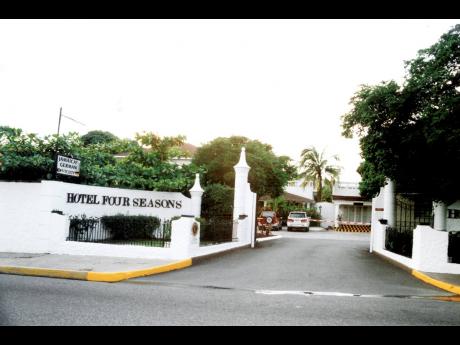 Hotel Four Seasons, a long-standing part of Kingston’s hospitality landscape, has been placed on the market for sale by its owners, who are seeking US$16 million, or about $2.5 billion in Jamaican currency, for the property located on Ruthven Road...

Hotel Four Seasons, a long-standing part of Kingston’s hospitality landscape, has been placed on the market for sale by its owners, who are seeking US$16 million, or about $2.5 billion in Jamaican currency, for the property located on Ruthven Road on the outskirts of New Kingston.

The hotel is being sold through realty firm Richard James & Associates, which said in the listing that Four Seasons was “still doing very well as a hotel despite these trying times of the COVID-19 pandemic”. The sector most affected by the pandemic was hospitality businesses, including hotels that were forced into hibernation when the travel market dried up shortly after the March 2020 onset of the pandemic. The tourism market is recovering, but at a measured pace. Business is especially slow in the meetings market, as most confabs have migrated to online platforms such as Zoom and Teams, and large events remain restricted as a virus containment measure.

Richard James & Associates’ sales manager Douglas Ewbank did not respond to a request for comment on the listing up to press time.

Amid the realty firm’s pitch to prospective buyers is the property’s potential to be repurposed as a treatment and recovery centre or hospital.

“It is adaptable to a multitude of macro uses based on its location, size, and so on,” it added.

Hotel Four Seasons has operated for decades but received new life in 2008 under a holding company Toyco Limited, according to Companies Office of Jamaica records. There are 12 shareholders in Toyco, but none with an outright majority stake. The top six owners are Daniela Stephanie Lundh, Christopher Miehle, Mike Peter Bauer, Kyna Wismer, Matthieu Genoud and Alexandra Genoud, each with equal holdings.

The hotel was upgraded nearly a decade ago, with the addition of a new wing that was unveiled in July 2012.

Tourism arrivals are above 2020 levels but still roughly one quarter below the record levels recorded in 2019. During 2020, with the onset of the pandemic, a number of hotels and villas were placed on the market amid the business fallout in the impaired tourism sector.

The largest documented property sales were Jewel Dunn’s River Beach Resort & Spa and Jewel Runaway Bay Beach Resort & Waterpark, which were sold by the Playa Group in May 2020 for US$60 million ($9 billion). The price was the hotels’ fair value of US$85 million ($12.6 billion).