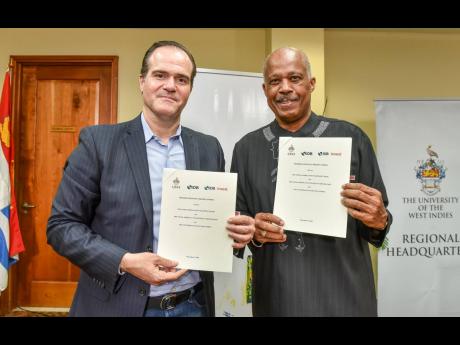 President of the Inter-American Development Bank, Mauricio Claver-Carone (left), and Vice-Chancellor of the University of the West Indies, Professor Sir Hilary Beckles, show copies of the newly signed memorandum of understanding to launch a new phase of cooperation between their institutions on December 9.

Talks are under way for the Inter-American Development Bank, IDB, to become an investor in the University of the West Indies, UWI, the Caribbean regional university celebrating its recently elevated ranking that puts it in the top tier of...

Talks are under way for the Inter-American Development Bank, IDB, to become an investor in the University of the West Indies, UWI, the Caribbean regional university celebrating its recently elevated ranking that puts it in the top tier of universities worldwide.

A price tag has apparently not yet been placed on the size of the intended investment, and there is no word on the proposed terms, but technocrats of the two institutions are said to be now crunching the numbers for what could be the template for a renewed thrust in the IDB’s engagement in public-private partnerships, PPPs, which its president, Mauricio Claver-Carone, wants to kick-start in Jamaica next year.

“We are in discussion with the University of the West Indies right now on trying to create a model for financial self-sustainability, where, through our private sector arm IDB Invest, we may be able to come in as investors to help them, particularly on the digital side as they expand their global campus,” Claver-Carone told the Financial Gleaner in an interview.

“I think there are various initiatives that could be income generating for UWI, and what better way to help the Caribbean generally, than not only helping this institution, that is a jewel of the region, but also helping the governments with a lot of their fiscal pressures and helping the university to become self-sustaining,” he said.

Last week, IDB officials, led by Claver-Carone, signed a memorandum of understanding with the UWI during a two-day visit to Jamaica. The agreement was said to be broad-based and designed to strengthen the existing relationship between the institutions, particularly in knowledge and research sharing, as well as providing the tertiary institution with access to the Caribbean and Latin American development bank’s academy.

The PPP with the UWI forms part of the bank president’s push towards greater private-sector engagement by the IDB in Jamaica, while de-emphasising lending. It is also being held up as a poster project for Claver-Carone’s commitment to the IDB doing more for the Caribbean subregion.

“The Caribbean is my priority,” he said. “I ran as the first president that doesn’t come from the continental Latin America, [that is] South America or Mexico. I am from the northern border of the Caribbean – Miami. The legacy I want to leave is one of a strengthened role with the Caribbean and, frankly, to earn the title of the first Caribbean president,” added the American citizen with connections to the Cuban-American community.

In declaring his intention for the IDB to be a multifaceted partner with the Caribbean, the IDB head said the focus on the subregion would be reflected throughout the Washington, DC-based institution during his tenure, which commenced in October 2020.

The planned UWI investment is also intended to reverse what Claver-Carone sees as the waning influence and involvement of the IDB in providing business solutions to Jamaica.

“We have become a secondary actor with regard to PPPs in Jamaica. We are just scratching the surface in respect of private-sector engagement. We are the primary actor with regard to PPPs in every other country in the Caribbean and Latin America, with the exception of Jamaica; and yet Jamaica is one of the countries that are the leaders in the legal and regulatory framework for PPPs across the world,” he noted.

“That is an institutional failure that we have had here; that is a frustration that I have, and that is something that we are going to turn the page on and move forward,” he added.

The IDB president is also talking up the policies of the Jamaican government.

“I have nothing but the highest regard for the policies of fiscal consolidation that we have been seeing in Jamaica, the buffers it has created. And as a result of that, we are seeing, and will be able to push for, more investment in the region because of those attractive fiscal and macroeconomic conditions,” he said.

Commending the government on what he described as its positive and stable macroeconomic policy framework over the past 10 years or so, the IDB head said the institution, in rolling out new financing and development products to help the country on its new trajectory, was now interested in participating actively in the local capital market.

“One of the opportunities we need to help develop (is) the currency market. We are very interested as an institution to be able to issue bonds in local currency to start creating that confidence, and that is something that we are working on. If we can do swaps on our instruments, that will help investors,” he pointed out.

He noted that the bank would be seeking an increase in its capital base from its member countries during the next annual meeting in March, to be able to help countries like Jamaica withstand emerging fiscal pressures, including those associated with rising inflation and interest rates.

“It (inflation) is going to have a huge impact in terms of outflows and access to markets; and if the IDB is not resourced well enough to be able to attend to the financing needs of the region, there is going to be a vacuum that is going to be of concern,” he said