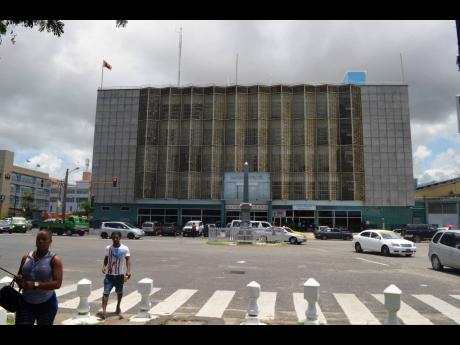 AP
The central bank of Guyana in Georgetown.

The International Monetary Fund, IMF, has concluded that Guyana’s medium-term prospects are quite favourable, particularly with oil revenues contributing significantly to development.

According to a statement issued after IMF staff engaged local stakeholders recently, Guyana’s economy has been adversely impacted by several local and external events, including a delayed political transition in 2020, the COVID-19 pandemic and the Russia’s war against Ukraine.

But: “After deteriorating markedly in 2020, the fiscal position remained appropriately supportive in 2021,” the IMF said.

“Guyana’s medium-term prospects are more favourable than ever before, with increasing oil production having the potential to transform Guyana’s economy.”

Between now and 2026, oil production offshore Guyana is expected to increase significantly. In the Stabroek Block alone, where a local affiliate for ExxonMobil has already commenced production, the oil reserves are estimated at over 11 billion barrels.

The IMF said that this amount of oil reserves is the third-largest in Latin America and the Caribbean, and among the highest in the world relative to the country’s population size.

Earlier this year, in its April 2022 World Economic Outlook, the IMF projected a nearly 50 per cent rate of economic growth for Guyana this year. Beyond 2022, the IMF said Guyana is expected to record a 34.5 per cent increase in 2023 and a 3.7 per cent increase by 2027.

The projections are similar to that of the World Bank, which estimates that Guyana’s national output, measured as gross domestic product, is expected to expand by 47.9 per cent this year, and by 34.3 per cent in 2023.

The expected growth for Guyana, which is part of the South American continent but is economically and politically aligned with the Caribbean, is primarily underpinned by its prolific oil sector and its large reserves the IMF said, adding that it’s sufficient for Guyana to increase fiscal buffers against shocks to the economy.

What this means, essentially, is that Guyana has fiscal room to spent on initiatives and projects that can cushion or altogether cut the adverse impacts of events such as the COVID-19 pandemic or food supply shortages.

But the IMF also advised the Guyanese authorities to carefully pace public spending.

“While pressing development challenges still face the country, a large surge in public investment could add inflationary pressure, affect competitiveness of the non-oil economy, lead to an eventual loss in (foreign exchange) reserves, and might not be sustainable over the medium term,” the fund noted.

It also cautioned that the increased dependence on oil revenues could expose the economy to the rapid, unpredictable changes in global oil prices. A slowing global economy and the repercussions from the war in Ukraine could also adversely affect non-oil exports.

The IMF noted that Guyana’s financial sector appears stable, with the country’s debt among the region’s lowest. This comes even as the government reallocated expenditures towards cash grants and transfers, effected tax cuts, and deployed resources towards infrastructure projects.

Guyana’s new law to establish the Natural Resource Fund, which manages how oil revenues are saved, used and guarded, was also commended.

“Staff strongly support the authorities’ goals to transform the economy, address development needs in an inclusive way, and protect the long-term economic well-being of the country,” the IMF said.

These goals include the reduction of electricity costs, improving transport infrastructure, diversifying the economy, improving access to and quality of social services, and protecting Guyana’s valuable forests.