Bauxite-alumina back on the rise

Projected to earn $77b for the economy after pandemic decline 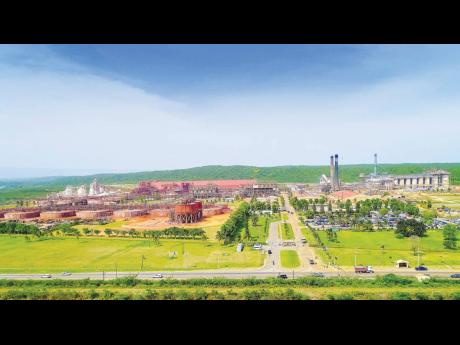 File
The Jamalco refinery in Clarendon.

The Jamaican Government expects the value of mining exports from bauxite and alumina to improve to US$507 million ($77 billion), seven per cent higher than last year, with the pending reopening of the Jamalco plant but there’s still concern over...

The Jamaican Government expects the value of mining exports from bauxite and alumina to improve to US$507 million ($77 billion), seven per cent higher than last year, with the pending reopening of the Jamalco plant but there’s still concern over the other alumina assets.

The sector has traditionally been one of the largest sources of export earnings for Jamaica but has been rocked by a series of recent global and local disruptions.

There are three main refinery plants in operation: Jamalco, which is owned by Hong Kong-based Noble and Government; Windalco, owned by Russian company UC Rusal; and JISCO Alpart, owned by China-based Jiuquan Iron and Steel Company of China.

“Assuming moderate improvements in bauxite and alumina prices in 2022 from 2021 levels, then the value of total crude bauxite and alumina exports is estimated at US$507 million,” the Government of Jamaica, GOJ, stated in its annual report released to securities regulators in the United States.

Jamalco and Alpart are both effectively closed, but there are concerns about Windalco’s Russian ownership in the context of the widening sanctions that have resulted from Russia’s invasion of Ukraine since February 24. One solution would involve a takeover of the Windalco assets in a worst-case scenario.

“We would have to take it over and sell it to another operator or structure a buyout. We cannot afford it and the plans need much capital improvement,” said Howard Mitchell, former chairman of the Jamaica Bauxite Institute, JBI, in response to Financial Gleaner queries.

UC Rusal previously told the Financial Gleaner when the issue of Windalco’s exposure to the economic penalties was first raised that there was a degree of separation between the company and its owners, which protects it from the sanctions.

The sector extracts minerals from largely virgin lands that are mainly concentrated in the centre of the island and spanning the parishes in Manchester, St Elizabeth and Clarendon. Mitchell questioned whether the best days of the sector are in the past within the context of the increasing importance to green investing that places a premium on environmental, social and governance or ESG factors.

“When you look at the environmental cost, the lack of capital required to properly capitalise the sector and so on, when you net it out, I don’t think we are where we were back in the 20th century,” Mitchell said. “We could transition the workforce into something else, to some softer alumina activity using the same plants.”

Mitchell said Jamaica’s bauxite-alumina sector had failed over the decades to transition to cleaner and more modern technologies and likened the sector to sugar – that is, important as a big job provider but lacking modernisation.

This year’s expected export earnings from the bauxite-alumina sector is less than half the levels of the US$1.2 billion five-year high earned in 2018 and well below the pre-pandemic earnings of US$814.5 million in 2019. That said, the impact of COVID-19 on the sector was less pronounced than in other sectors, GOJ stated.

“To date, COVID-19 has had no direct impact on the output of bauxite or alumina in Jamaica,” stated the report, adding that 2022 began on a less than optimistic note with the alumina industry operating at low levels of capacity. “However, the prospects should improve with the projected partial reopening of the Jamalco refinery in June 2022.”

The Jamalco refinery, based at Halse Hall in Clarendon, was shuttered last summer following a fire at the plant in August. In the March 2022 quarter, the mining sector declined by 64 per cent compared to a year earlier, due to the fallout from Jamalco, as reported by the Planning Institute of Jamaica, which tracks the performance of the real economy.

The refinery is expected to return to “pre-fire production levels” in September, rebooting the mining sector in the process. However, the bauxite-alumina industry is expected to face other challenges from developments in the global environment.

“These include rising input commodity prices, logistical challenges and restricted markets. Also, due to the ongoing Russian invasion of Ukraine, there exists a high level of uncertainty and fear regarding the short- and long-term impacts that the sanctions placed on Russia, Russian companies and oligarchs may have on UC Rusal operations, including Windalco,” the GOJ report noted.

Source: Jamaica Bauxite Institute via the annual report of the Government of Jamaica.