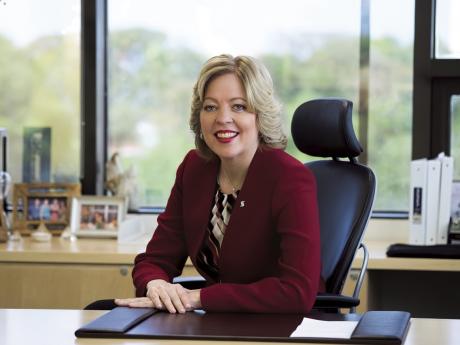 Schnoor's experience in the financial services sector in the Caribbean spans more than 30 years in the areas of wealth management, insurance, and banking. - Contributed photo.

Prominent businessman Jeffrey Hall is to retire as Chairman of the Board of Scotia Group Jamaica Limited (SGJL), effective December 9.

Hall will be replaced by executive and current board member Anya Schnoor.

Schnoor is currently the Executive Vice President for the Caribbean, Central America, and Uruguay region at Scotiabank.

Hall has served the board for 15 years, with six as chairman.

In a statement today, the company hailed Hall as being instrumental in promoting a strong corporate governance and risk culture throughout the bank and was an advocate for its role in supporting its customers and communities, especially during the last two years as Jamaica faced the challenging effects of the global pandemic.

“It has been an honour to serve on the board of SGJL amongst such an esteemed group of directors. Scotiabank is an extraordinary institution which has contributed much over its 133-year history to the development of the Jamaican economy and the lives of millions of individual customers. I have the highest confidence in the management and staff as they continue to drive the company forward and wish the bank continued success in the future”.

Schnoor joined Scotiabank in Jamaica in 2006 and has held progressively senior roles across the bank.

In her executive role, she leads the development of the overall strategic direction for the bank's personal, commercial, corporate, wealth, and insurance operations in the region.

Her experience in the financial services sector in the Caribbean spans more than 30 years in the areas of wealth management, insurance, and banking.

She is also a member of the International Women's Forum, an organisation dedicated to supporting the next generation of women leaders.

She has extensive directorship and stewardship experience in Jamaica, the Caribbean region and internationally.

Commenting on her appointment, Schnoor said; “It is my absolute pleasure to be appointed as Chair of the Board of Scotia Group Jamaica. I want to personally thank Jeffrey for his invaluable contribution over the past 15 years and for helping to position Scotiabank for long-term success. I look forward to continuing to work with my fellow directors and the team in Scotiabank to deliver strong value to our shareholders and customers and contribute to the growth and development of Jamaica.”