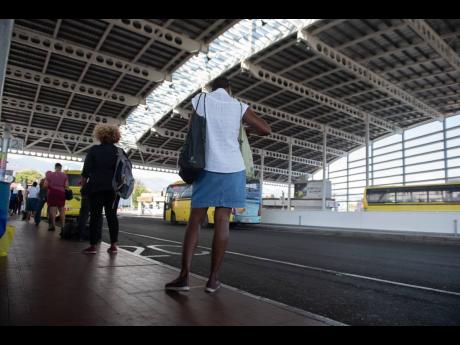 File
Commuters awaiting the bus at the Half Way Tree Transportation Centre in Kingston.

Commuters will soon start using cards to pay for rides on buses and trains owned by the Jamaican Government as it digitalises the $1.8 billion generated in fares annually. It is aimed at improving efficiency while reducing the likelihood of fare...

Commuters will soon start using cards to pay for rides on buses and trains owned by the Jamaican Government as it digitalises the $1.8 billion generated in fares annually.

It is aimed at improving efficiency while reducing the likelihood of fare loss. The cost of implementation will be known following appointment of a supplier.

The cashless system will utilise various forms of topping up on credit, including digital currency. The Government is currently seeking a vendor to implement the service.

“The general objectives of this request for proposal for a multimodal (interoperable) cashless fare collection system for the public transport sector in Jamaica,” said the tender document.

“This is important as the project will present a radical culture change. Presentation is expected to be made on-site at the facilities of the JUTC, MBM and JRC. The MBM, JRC and JUTC will provide the venue and facilities for this presentation,” stated the tender document seen by the Financial Gleaner.

Requests for comment from the Ministry of Transport and JUTC were unanswered after two weeks.

The JUTC previously introduced cards, but those lost favour over time as commuters still paid with cash on buses. It is not known whether cash will be allowed on the public transport system after implementation.

The supplier must ensure that the system allows for various types of top-up modes and facilitate the convenience of online top-ups. It must allow for a minimum of 1,000 merchant locations across the island. It must be capable of accepting “debit and credit cards, mobile app top-up, Jam-Dex, and bank transfers and provides an opportunity to check cash balances”, said the tender document.

The move also aims to realise the Government of Jamaica’s vision to create a digital economy through the digitisation of the public transport system, according to the document. The supplier should also ensure various levels of security while allowing various avenues to top up and “implement a uniquely inclusive platform that is secure, flexible, a comprehensive payment solution and simple for application on public transport that accepts various payment media”, the document said.

The vendor will have six months after selection to implement the system on a trial basis.

“The chosen service provider will be required to demonstrate the transaction and payment system on the JUTC, MBM buses and JRC trains. During the trial period, the system will be tested alongside the existing fare collection platform for a duration of six months to facilitate a seamless transition between both systems,” the document noted.

The provider will be issued a five-year contract after the trial period.

Last week, JUTC managing director Paul Abrahams reportedly told Parliament that the Ministry of Transport had completed its evaluation of the tenders and that he awaits their decision on the chosen provider. Abrahams did not answer calls seeking comment.

The JUTC expects to collect $1.7 billion in fares for fiscal year ending March 2023, up from $1.4 billion a year earlier. It is still expected to end the year with a $8.1 billion deficit.

The JRC expects to generate $30.3 million in train fares and charges, up from $9.3 million a year earlier. The rail service is expected to record a net loss of $40 million.

In January 2022 the JRC launched a pilot school train programme which marked the partial resumption after a decade of closure. The service was initially discontinued in 1992 but resumed in 2011 and then discontinued in 2012.

The MBM expects to generate $31 million from route collections, which is around the same amounts collected in fiscal 2021. It’s projected to make an operating loss of $180 million.