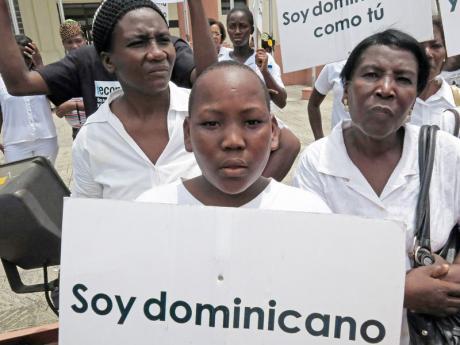 File Photo
A youth of Haitian descent holds a sign on August 12, 2014 that reads in Spanish 'I'm Dominican'.

BOSTON, CMC – The impending deportation of Haitians and those of Haitian descent who were born in the Dominican Republic is dividing legislators in Massachusetts.

Nationals of the Dominican Republic and Haitians are among the largest immigrant communities in Massachusetts, and, over the years, they have built alliances on issues such as education, immigration and jobs.

But now the conflict in Dominican Republic is testing those loyalties and pushing Massachusetts politicians to take sides in the Caribbean fray.

The Boston Globe reports that tensions escalated in recent weeks amid widespread confusion over the effect of the Dominican Republic’s plans for enforcing its immigration laws.

Dorcena Forry, a Massachusetts senator of Haitian parentage, said she received death threats after she called for the travel boycott of the Dominican Republic last month.

On July 9, dozens of flag-waving protesters on both sides clashed in front of the Dominican Republic consulate in Boston. The next day, Boston Mayor Martin J. Walsh called a special meeting to say he did not support the boycott, after an aide had publicly said he did.

In comments to Spanish-language media here and overseas, he called the travel boycott a “dirty campaign” that would hurt Forry and others with Dominican-American voters.

Massachusetts is home to more than 120,000 people of Dominican Republic descent, including immigrants and their US-born children, and 77,000 Haitian-Americans, according to the US census.

“This is a humanitarian crisis. We get that the Dominican Republic is a sovereign nation,” Forry said.

But Cabral, the former Dominican Republic Consul General in Boston, said: “We’re going to make the difference in the next elections. And if she persists in this, she’s going to lose. And the mayor, too.”

Dominican Republic officials insist that nobody has been deported from the country since late 2013, after their nation’s highest court, reinterpreting a constitutional provision, ruled that Dominican-born children of undocumented immigrants were not entitled to citizenship, the Globe said.
The ruling effectively revoked the citizenship of as many as 200,000 native-born Dominicans, mainly children of Haitian immigrants to the Dominican Republic.

In response to the court ruling, the president of the Dominican Republic cleared the way for people in the country illegally to apply for legal residency by June 17 or face possible deportation.

The deadline reignited the international debate and generated fears of deportations, even for those born in the country.

“No one born in the Dominican Republic will be deported,” Jose Tomas Perez , the Dominican ambassador to the United States, wrote in a July 11 column in El Neuvo Herald, the Spanish version of the Miami Herald.

Approximately 55,000 native-born Dominicans with foreign parents have been approved, while another 9,000 applications are pending.

US Senator Edward J. Markey called the application process “overly burdensome” in a letter to the US State Department earlier this month, and US Secretary of State John Kerry, former Massachusetts governor, expressed similar concerns in a statement.

Although Dominican officials say nobody has been deported, media reports have documented some deportations, and tens of thousands of people have left on their own accord, some fearing violence if they don’t.

In his letter to the State Department, Markey said the Dominican Republic government was “brazenly” encouraging the departures by providing free rides to the border.