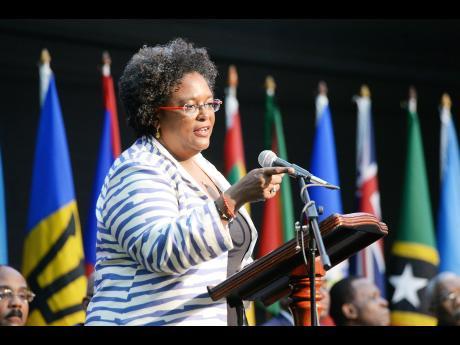 BRIDGETOWN, Barbados, CMC – The Barbados government says it will “not blindly adhere to policies which are unbearable” for the population as it announced plans to deal with the concerns raised by citizens regarding the increase in land tax rates for properties in excess of BDS$450,000.

Prime Minister Mia Mottley told legislators that her administration has a “mandate to adhere to the Barbados Economic Recovery and Transformation Plan (BERT), as it was designed “to provide stability and recovery for our economy”.

Last year, the government announced BERT, which aims to restore macroeconomic stability and place the economy on a path of strong, sustainable and inclusive growth, while safeguarding the financial and social sectors. Included in BERT was the suspension of payments due on debt owed to external commercial creditors and a comprehensive domestic and external debt restructuring.

“What this means Sir, is that the land tax on all properties below BDS$450,000 has not increased. In other words there is no increase for 63,618 properties in Barbados, out of the total 81,932 residential properties in the island. For almost 64,000 properties there has been no increase in land tax.”

She said that the measure also meant that the land tax on a property owned by most Barbadians has not increased, acknowledging however that the change in land tax rates does affect some Barbadians.

But she told legislators that with the additional disposable income to be delivered through the reduction of income tax rates as of next month, and then again a further reduction in January next year, the owner of a home valued over BDS$450,000 and with an income of about BDS$75,000 as a salary will pay approximately BDS$4,375 less in income tax in a full fiscal year.

But Mottley said that despite the new measures, there will be some taxpayers who require intervention for reasons that are peculiar.

She said that in response to the change in land tax rates, the government has heard from those Barbadians hurting.

“Some have let their voices be heard and asked for a little bit of an ease with the payment of land tax,” she said, adding that as a result the government has decided to act reminding the nation that she had earlier this year indicated that “we as a nation stay the course” in dealing with the economic situation facing the island.

“We all knew it would not be easy, but my Government is determined that we share the burden fairly and that no group will be unduly affected by the measures which we are implementing. Because of this Mr. Speaker, we have created a framework to make it easier on ordinary Barbadians to pay their land tax bills over a longer period of time. We will be facilitating payment in instalments,” she said.

She said that there has been an outcry about the early issue date of these bills and the comparatively shorter discount periods for taxpayers to take advantage of, adding “that has not been the case Sir.

She said that having consulted with the relevant stakeholders, the government has taken the decision to allow taxpayers to enter into an arrangement with the Barbados Revenue Authority which will allow for the payment of land taxes in up for four instalments.

“This arrangement, Mr. Speaker, will allow persons to better plan the payment of their taxes and allow Barbadians to pay their land tax over a longer period of time because hitherto you paid your land tax once and for all in whatever month you paid it.

“Similarly, it will also allow many to benefit from the increase in disposable income that will come from the significant income tax relief that will start from next month, and once that relief comes it will be able to help them pay what land tax is due and owing.”

Mottley said that the government had also agreed to extend the discount to even more Barbadians by allowing them to retain the discount of five per cent once they enter into the instalment arrangement before July 26, next month.

“Mr. Speaker, although we must make difficult choices in adhering to the Barbados Economic Recovery and Transformation Plan, we must always listen to the public and there must always be room for empathy and compromise in our decisions,” she said, adding that  as it relates to land owners who are pensioners, “we acknowledge that on a fixed income, pensioners may not be in a position to pay the full amount of the land tax.

“For this reason Mr. Speaker, the Barbados Revenue Authority typically grants pensioners a rebate of 60 per cent of the amount of Land Tax that is due on the properties on which pensioners reside.

“There is, in spite of this 60 per cent rebate, still available to that pensioner or anyone else for that matter, further relief upon a case being made to the Land Tax Relief Board which seeks to provide relief where there is undue hardship in the application of land tax to anyone in this country.

“So ay Barbadian can apply so long as they can make their case of undue hardship,” she told legislators.