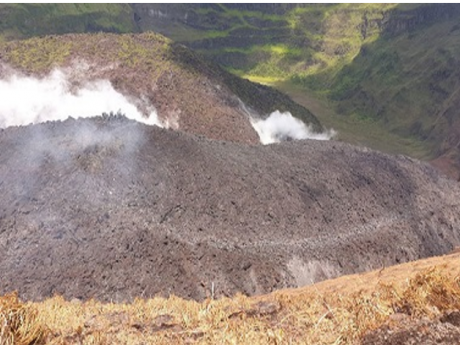 The National Emergency Management Organisation Wednesday warned residents of communities near the volcano to heighten their preparedness in the event that it becomes necessary for them to evacuate at short notice.

KINGSTOWN, St Vincent, CMC – The lead scientist monitoring the La Soufrière volcano, Professor Richard Robertson, says an increase in earthquakes at the site could suggest that an explosive eruption could happen soon.

La Soufrière has been erupting effusively since late December and a new dome has formed alongside the one left inside the crater after the 1979 eruption of the volcano.

The National Emergency Management Organisation (NEMO) Wednesday warned residents of communities near the volcano to heighten their preparedness in the event that it becomes necessary for them to evacuate at short notice.

NEMO said that scientists at the Belmont Observatory have noted a change in seismic activity associated with the ongoing eruption of the volcano.

“And one of the things that will drive it to go explosive is fresh material coming in, new material to give it energy,” Robertson said, adding that the earthquakes which began on Tuesday could indicate that fresh magma is trying to make its way to the surface.

“So this is the first indication that maybe this is happening. We have to track it to see if it is really indicative of that,” he further explained.

He said that the material that has oozed out of the volcano since December could have been there since the eruption of April 1979.

However, he said that this week’s events suggest that new material could be making its way to the surface.

“This magma is deeper down, is trying to get to the surface, it’s trying to find a pathway through and in doing that, it is causing vibrations in the ground, which our instruments are detecting,” Robertson said.

Since the effusive eruption began, scientists have installed additional monitoring equipment across the country and Robertson said that the information generated this week shows that the equipment is functioning as intended.

“That is what they are set up there to do. They are set up there precisely to tell us if something like that is trying to come through and we are then about to track it to see if it gets to the point where it is going to get to the surface and that’s one of the reasons we have a monitoring network. We try to track that,” he explained.

“So, in a sense, it’s probably not a good thing that is happening because it tells us that this eruption could go to a stage where we all really don’t want it to get to, but also, it tells us that the instrumentation that we put in is working; it’s detecting the events that could indicate something else that is more nasty that could happen.”