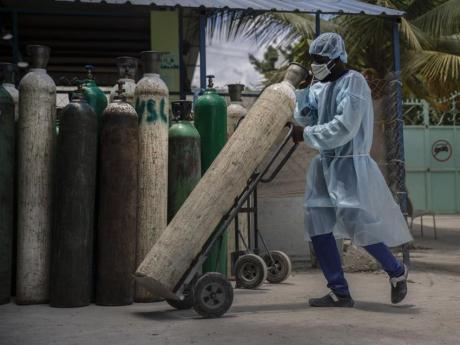 A hospital employee wearing protective gear as a precaution against the spread of the new coronavirus transports oxygen tanks in Port-au-Prince, Haiti, Saturday, June 5, 2021. Haiti defied predictions and perplexed health officials by avoiding a COVID-19 crisis for more than a year, but the country of more than 11 million people that has not received a single vaccine is now battling a spike in cases and deaths. (AP Photo/Joseph Odelyn)

PORT-AU-PRINCE, Haiti (AP) — Ever since the pandemic began, Haiti had perplexed experts with seemingly low infection and death rates from COVID-19 despite its rickety public health system, a total lack of vaccines, and a widespread disdain for safety measures like masks and distancing.

The few Haitian hospitals treating COVID cases have been so swamped in recent days that they report turning away patients, while plans to open another hospital to treat the infected have been delayed.

Official figures remain relatively low for a nation of more than 11 million people: Just 2,271 cases and 62 deaths have been recorded over the past month in government data collected by Johns Hopkins University.

A total of 15,700 cases and more than 330 deaths have been reported since early last year.

But experts are united in saying those figures miss the true scale of what they say is the largest spike in cases since the new coronavirus first landed.

The government declared a health emergency on May 24 and imposed a curfew and safety measures — though few Haitians appear to be following them.

Most shun, or can't afford, face masks and it's nearly impossible to keep a distance while shopping in bustling marketplaces or riding the crowded, colourful buses known as tap taps that most Haitians rely on to get around.

“There is no time to waste,” said Carissa Etienne, director of the Pan American Health Organization, which is working with the government to scale up testing to identify and isolate infected people — a difficult task in a place where few think they can afford to be sick.

The lack of cases early this year had led authorities to reduce the number of beds available for COVID patients to about 200 — more than half of those at the non profit St Luke Foundation for Haiti in the capital of Port-au-Prince.

But by early this month, that clinic was at capacity and announced it was turning away patients.

“Many people are dying on arrival in ambulances,” the foundation said.

“We have received many nuns as patients, a sure sign (COVID-19) is in the poorest areas.”

Marc Edson Augustin, medical director of the St Luke hospital, said he's especially worried about the deaths he has seen among those aged 17 to 22, and that groups of up to seven people are showing up at the same time seeking treatment for COVID.

So far, Haiti hasn't received a single vaccine, though officials say they expect to get 130,000 AstraZeneca doses this month.

The US government also said it would donate a portion of six million doses for Haiti, though officials haven't specified how many or when they will arrive.

Some 756,000 doses of AstraZeneca shots had been slated to arrive in May via the United Nations' COVAX program for low-income countries, but they were delayed due to the government's concern over possible clotting as a side effect and a lack of infrastructure to keep the vaccines properly refrigerated.

The medical system also has been struggling with other problems, including unpaid wages for some workers.

President Jovenel Moïse recently asked the Ministry of Economy and Finance to ensure they get paid.

Even when vaccines arrive, experts worry many people may not get a jab — some for fear of venturing through crime-wracked neighbourhoods to reach a clinic.