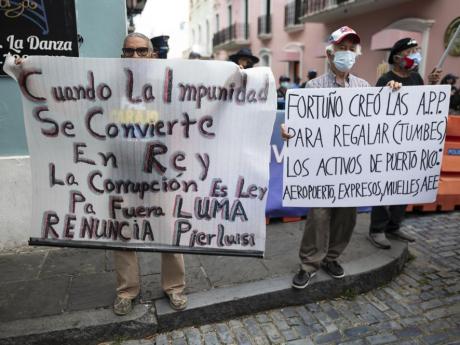 Demonstrators from various organisations congregate on Fortaleza street to protest against the constant selective blackouts that the island has suffered for weeks due to low power generation, in San Juan, Puerto Rico, Friday, October 1, 2021. Power outages across the island have surged in recent weeks, with some lasting up to several days. (AP Photo/Carlos Giusti)

SAN JUAN, Puerto Rico (AP) — Not a single hurricane has hit Puerto Rico this year, but hundreds of thousands of people in the United States territory feel like they're living in the aftermath of a major storm: Students do homework by the light of dying cell phones, people who depend on insulin or respiratory therapies struggle to find power sources and the elderly are fleeing sweltering homes amid record high temperatures.

Power outages across the island have surged in recent weeks, with some lasting several days.

Officials have blamed everything from seaweed to mechanical failures as the government calls the situation a “crass failure” that urgently needs to be fixed.

The daily outages are snarling traffic, frying costly appliances, forcing doctors to cancel appointments, causing restaurants, shopping malls and schools to temporarily close and even prompting one university to suspend classes and another to declare a moratorium on exams.

“This is hell,” said Iris Santiago, a 48-year-old with chronic health conditions who often joins her elderly neighbours outside when their apartment building goes dark and the humid heat soars into the 90s Fahrenheit.

“Like any Puerto Rican, I live in a constant state of anxiety because the power goes out every day,” she said.

“Not everyone has family they can run to and go into a home with a generator.”

Santiago recently endured three days without power and had to throw out the eggs, chicken and milk that spoiled in her refrigerator.

She said power surges also caused hundreds of dollars of damage to her air conditioner and refrigerator.

Puerto Rico's Electric Power Authority, which is responsible for the generation of electricity, and Luma, a private company that handles transmission and distribution of power, have blamed mechanical failures at various plants involving components such as boilers and condensers.

In one recent incident, seaweed clogged filters and a narrow pipe.

Luma also has implemented selective blackouts in recent weeks that have affected a majority of its 1.5 million clients, saying demand is exceeding supply.

Luma took over transmission and distribution in June. Puerto Rico's governor said the company had pledged to reduce power interruptions by 30% and the length of outages by 40%.