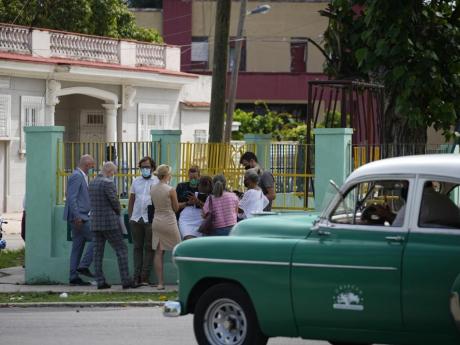 Diplomats from several countries wait outside the court building where a trial is going on for Cuban artists Luis Manuel Otero Alcantara and Maykel Castillo in Havana, Cuba, Monday May 30, 2022. The artists were arrested and imprisoned in connection with alleged public disorder at a community event they hosted in April 2021. (AP Photo/Ramon Espinosa)

HAVANA (AP) — Two members of a loose-knit group of dissident artists have been sentenced to prison in Cuba, the country's prosecutor's office said Friday.

Maikel Castillo was sentenced to nine years for attacks and defamation against the country's institutions and Luis Manuel Otero Alcántara, 34, to five years for insulting national symbols.

Both were involved with the so-called San Isidro Movement — named for the neighbourhood where Otero Alcántara lives — that had attracted unusually wide support among prominent Cuban artists and musicians in 2020.

Their arrests had been denounced by international human rights organisations as well as the United States government, which considered them political persecution.

The government said it was merely applying the law as it would to anyone.

Prosecutors had sought 10 years for Castillo, better by the performance name “Osorbo,” and seven for Alcántara, according to their friends.

The same court also imposed a five year sentence on Félix Roque Delgado and three years on two women who were convicted of hitting police in an effort to halt the arrest of Castillo, a 39-year-old rapper.

He was among the composers of the song “Patria y Vida” — “Fatherland and Life” — whose twist on the Communist government's “Fatherland or Death! slogan made it a sort of anthem for opposition figures. It won a Latin Grammy award this year.

In November 2020, police broke up a sort of sit-in at Otero Alcántara's house in support of another rapper, Denis Solís, who had been sentenced to prison for insulting a police officer. Castillo was among those taking part in the sit-in.

Officials said they were enforcing pandemic restrictions on gatherings, but the move prompted about 200 people to stage a larger, almost unprecedented protest outside the Culture Ministry.