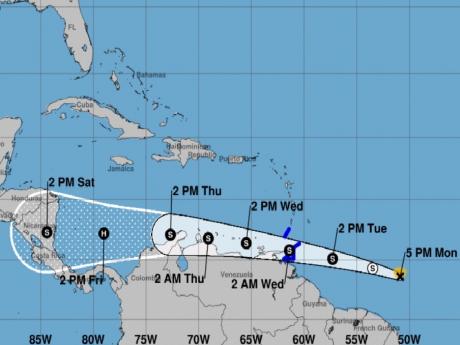 MIAMI, CMC – A tropical storm warning was on Monday evening issued for Trinidad and Tobago and Grenada and its dependencies as forecasters say a disturbance approaching the Caribbean has the potential to become Tropical Storm Bonnie as early as Wednesday.

The hurricane centre said the system is moving toward the west near 23 miles per hour.

A westward or west-northwestward motion is expected through Thursday.

On the forecast track, the system will pass near or over portions of the southern Windward Islands by tonight, and move over the southern Caribbean Sea or near the northern coast of Venezuela on Wednesday and Thursday.

Slight strengthening is forecast during the next few days if the disturbance remains over water.

It has also advised interests elsewhere in the Windward Islands, the northern coast of Venezuela, Aruba, Bonaire, and Curaçao to also monitor the progress of the system.

The potential tropical cyclone is expected to produce heavy rain across the southern Windward Islands and the northeastern coast of Venezuela starting Tuesday night into Wednesday.

Up to three inches of rain are expected over the islands from Guadeloupe to St Lucia; three to four inches in St Vincent and the Grenadines, and Barbados; and four to six inches over Grenada, Trinidad and Tobago, and northeastern Venezuela.