The Gavel: Go catch the Jacks of this world 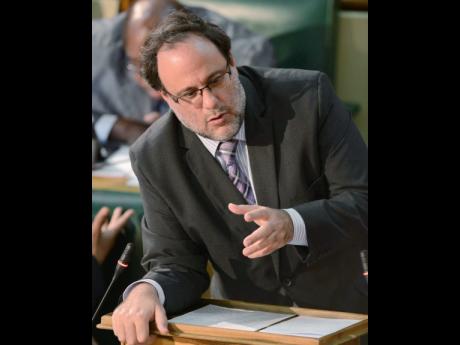 There has been a practice by the Office of the Contractor General (OCG) to commence investigations into the award of contracts by the state to external entities, even before a deal has been signed.

In fact, there is ample evidence of the OCG causing a process to stop by conducting an investigation to ascertain whether fairness was at the forefront.

The power to do so is in Section 15 (1) (b) of the Contractor General Act, which provides that: "...a Contractor-General may, if he considers it necessary or desirable, conduct an investigation into tender procedures relating to contracts awarded by public bodies."

But based on the posture of Mark Golding, Jamaica's justice minister, the days of major projects being put on hold to facilitate an investigation are numbered.

Golding, while chairing the joint select committee of parliament considering the Integrity Commission Act, last Wednesday, said he was not opposed to having the commission asking public bodies to provide information on what they intend to do, but said he would have a difficulty if it was able to decide whether the contract should be signed.

According to Golding, the action of some anti-corruption bodies has "cost the country dearly".

"There was the divestment of WINDALCO (West Indies Alumina Company), where it was held up for a protracted period of time by the intervention of one of these agencies, and then, ultimately, when the sale was concluded, they got a lower price than they would have got had the original deal been completed," Golding said.

He added, "There are several examples of major transitions where the attempt to intervene in the process before a contract has been concluded has led to a significant delay and ultimately, not necessarily any improvement in the outcome."

Recall that the Office of the Contractor General, in the case of the Windalco divestment, insisted on a second valuation for Jamaica's seven per cent stake in WINDALCO, resulting in a delay in concluding the deal.

Also, let us recall that last year, the managing director of Jamaica Bauxite Mining Limited, Coy Roache, blamed interference from external agencies for Jamaica's debt to UC Rusal climbing from US$14 million in 2011 to US$21 million. Roache said Jamalco would have been able to save US$7 million if the government had intervened.

We can look at the examples of the North-South Highway which was delayed because of the said interference.

Thankfully, members of the joint-select committee of Parliament pushed back on a suggestion from the OCG for the entity to be granted powers to investigate contracts for the divestment of state assets before they are awarded.

I am at one with those who feel that it is improper for any commission of parliament, be it the OCG or the proposed Integrity Commission, to be so powerful that they can stop a process just because they are suspicious.

We have, over the years, used red tape to put a stranglehold on our ability to execute contracts, leading to slow and poor implementation rates, simply because we see everyone as a crook. But where has it got us? Nowhere! It is time for a change of strategy.

During Wednesday's sitting, Senator Kamina Johnson Smith argued that "if we are looking at better regulation of corruption by public bodies, then it must be that we ensure that body is sufficiently empowered".

One has to empathise with the senator. Jamaica is perceived to have a big corruption problem, but there is hardly any evidence of people being hauled before the courts for illicit enrichment. In fact, it was a pitiful sight a few weeks ago when the Commission for the Prevention of Corruption struggled to find instances of successful prosecution for illicit enrichment to inform the committee.

Now, this is the commission that administers and enforces the Corruption (Prevention) Act which was passed in 2000. The Act was established to eliminate bribery and corruption within the government services. It requires that certain categories of public servants make statutory declarations of their assets, liabilities and income. Provisions are made for the investigation of those government employees whose declared assets are not in keeping with their total emoluments.

The commission gripes about being unable to get a ruling from the Director of Public Prosecutions in respect of over 18,000 persons who have been referred for breaches of the act, less than a dozen of which relate to the serious offence of illicit enrichment.

If this is not the definition of net fishing and wasting scarce resources going after small fry, I don't know what it is. It is time we move in a deliberate manner to catch the kingfish, or in the words of Senator Lambert Brown, we have not been able to "catch the Jacks of this world".

To return to the matter of pre-emptive strikes by an anti-corruption agency, I am at one with Golding who says one could seriously impede the efficiency with which business is conducted if those are to be allowed.

Senator K.D Knight, at an earlier meeting of this committee, had spoken out against the practice of some overzealous persons who have taken it upon themselves to be demigods.

This is a trend which Peter Bunting, the national security minister, said he was not in favour of. For Bunting, it is a bad thing "to take power from democratically elected officials and give it to unelected and unaccountable officials".

He makes the compelling argument that were the commission to be given power to investigate before a contract is awarded, it would be "giving executive authority to the Integrity Commission because they could block the authority of the Executive (Cabinet)".

I am pleased that the committee has got this one right. To borrow the words of Delroy Chuck, if the anti-corruption authority is to go in before a contract is awarded, "no contract would be signed in Jamaica".

The procurement process is already a hindrance to investment (thank God it is being reviewed), there need not be any more unnecessary hurdle to doing business. The anti-corruption agencies should use well the provisions that are now in law to catch the public officials benefiting from illicit enrichment and use the Proceeds of Crimes Act as the recovery tool.