The Gavel: Police state in the making? 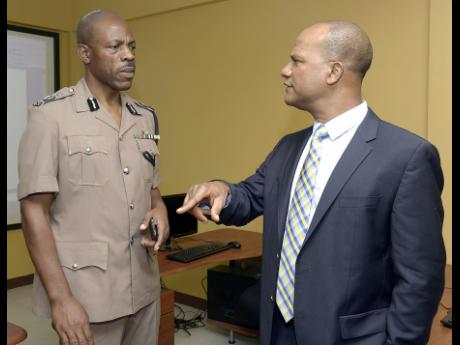 A most frightening thing has come from the mouth of Commissioner of Police Dr Carl Williams, who last Monday revealed that serious consideration is being given to amending the Bail Act to allow for the arresting of people, even without sufficient evidence to charge them.

"We also want to, hopefully, get an amendment to the Bail Act, so that even persons who are not charged for criminal offences can be arrested and bailed prior to charge," Williams said of a proposal that is now before the Legal Reform Unit of the Ministry of Justice.

It comes at a time when not only is there an increase in violent crimes on the island, but public perception of both Williams and National Security Minister Peter Bunting and their efforts to get the job done is low.

One cannot help but make a link between the proposed amendment to the Bail Act, which, based on the way it has been communicated, would seriously offend the constitutional provision of freedom from arbitrary arrest, and the DNA bill which is now before Parliament.

Perhaps many Jamaicans may have missed it; maybe they haven't, but that bill is proposing that the police be given the right to take DNA from a person who has been arrested. Now, this would take place without a court order.

Intimate sample refers to blood, urine, semen, tissue fluid obtained by breaking skin or pubic hair. It also refers to a swab, washing or sample taken from any part of a person's genitals or bodily orifice other than the mouth; a dental material; or fetus or products of conception.

But I am beginning to have second thoughts about the DNA bill not being subjected to the greatest-possible parliamentary rigour. It may very well be possible that the proposed amendment of the Bail Act and the DNA Bill is part of a scheme to open the flood gates of arbitrariness.

If the DNA bill is passed in its current form, and the Bail Act amendment comes to life, the police will be able to arbitrarily pick up people, take DNA samples from them for matching and investigation purposes, with impunity.

The police will be plucking hairs left right and centre, taking swabs and using batons and gun butts to restrain people who refuse to cooperate in giving samples.

And we don't need to make the point that the bulk of those to be picked up will be the poor, black youths.

I pray that my fears are unfounded.

One hopes that lawmakers, when they make their contribution to the DNA bill, will not see it only as a stand-alone piece of legislation. Instead, they should seek to marry it with the intentions of the police, as articulated by no less a person than the commissioner of police.

It is an open secret that the police have had a liking for extraordinary powers to deal with crime. In 2010, for example, they requested and got five anti-crime bills which were special measures to help put crime under control. One of those bills, which involves amendments to the Bail Act, was struck down by the Supreme Court.

Among other things, the amendments provided for the detention of a suspect on gun and murder offences for 60 days without bail.

Additionally, accused were being required to satisfy the court as to why they should be released on bail, a provision which runs counter to the Constitution. They could be held for up to 72 hours before being charged, instead of the 24-hour period provided for by the Constitution.

The police commissioner is demonstrating that we have not learnt much from that ruling.

It would be a good thing if the contribution made to the debate on the Crime Bills in 2010 by Dr D.K. Duncan is studied by all legislators when they consider these far-reaching legislation being proposed.

"Succeeding administrations felt that draconian measures could work effectively to eliminate gun crimes. I, myself, was part of that administration in the 70s that ... tried the most draconian of all," Duncan said.

"For example, if you had one round of ammunition and you are in a bus - if a round of ammunition was in a mini-bus - as we used to call them in those days - all passengers in that bus were moved to the Gun Court, which was red! Talking about symbols, Mr Prime Minister, that was symbol. Red because it was dread! Life mandatory, because you want to obscure the hell out of the - the daylights out of the criminals, right," he continued.

"The Gun Court itself was painted red to send that signal. It ceases to be red, it is still there, but the level of gun crimes continues to be dread. The accompanying legislation, The Suppression of Crime Act, allow the security forces - one of the things that we had tried to do - unfettered access to anywhere, disregarding the rights of the citizens," Duncan said.

Like Duncan, The Gavel takes the position that the aforementioned part of history may help us in the way we formulate the bills and the laws, such as the amendment to the Bail Act or even the DNA bill. At all times, human-rights consideration must triumph over any other interest.