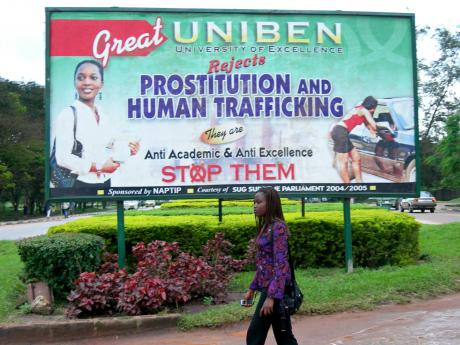 Sunday Alamba
In this September 9, 2006 photograph, a student at Benin University in Nigeria walks past a billboard encouraging young women to fight against prostitution and human trafficking.

No, no, no! No one from Reuters news agency, based in London, contacted me regarding my article on human trafficking last week.

It is simply that truth does have a way of getting out; whatever might be the version of it one wishes to push. I make no apologies here.

I'm a Jamaican nationalist and I want to see the uplift of my country. With very important members of my family living in the USA and with our deeply intertwined history, geography and economies, a strong and just America ranks very close to my nationalism.

Long before rap music, long before Marcus Garvey took America by storm 100 years ago, before Claude McKay led the Harlem Renaissance, and even before President James Monroe's 1820s declaration of his doctrine regarding the Americas being America's, we were part of US history. Jamaicans did support the American Revolution and Samuel Francis' name pops up. William Penn Jr, whose father chased the Spanish from Jamaica, founded Pennsylvania, and a large percentage of the blacks in the Carolinas were either sold from Jamaica in the 1700s or were taken by their 'masters' as they migrated after 1807 to maintain their economic benefits after the slave trade was abolished.

For me, there must be zero tolerance to human-rights violations, and among these are violence, discrimination and, of course, modern-day slavery, human trafficking. There are many ways to lie and skew the truth; but only one accurate version of it exists. It doesn't vary according to race, sexual orientation, nationality, political expedience or economic interests within or between countries.

Therefore, my indignation had to be expressed when Jamaica was unfairly given a Tier 2 Watch rating by the US Department of State, over our efforts to combat this cancer on modern civilisation. Don't be mistaken, there is work to be done here. But the public functionaries have been cooperating with internal and external pressure and the academics have been doing the research to investigate the depth of the problem and improve on the Government's laudable efforts.

However, when Cuba, a country not known for openness, and Malaysia mysteriously got 'tickies' while we got the 'wrong bongs', it caused all hairs on my scalp to rise. More painful is the fact that in March 2015, the UN's special rapporteur on trafficking in persons, Maria Grazia Giammarinaro, visited the latter and concluded, "[The] government of Malaysia must increase its efforts in addressing all forms of human trafficking while also protecting the rights of its victims." So, how come we got red marks while countries that have done less got better grades?

I do not know where the State Department got its information from for use in its report, but it was wrong. It was just as incorrect as when it said, a month ago, "There were credible reports ... that the government monitored private online communications without appropriate legal authority."

Then, after recognising that there was no evidence to support this serious allegation, revised the statement by inserting the largest 'no' seen in a long time. Thus: "There were no credible reports that the government monitored private online communications without appropriate legal authority."

This inequity is like being suspended for burping in class and saying "excuse me", while another classmate, whose father is rich or powerful, deliberately passed gas on the teacher who smiled it away and said, "Perfume!" Such faux pas are not minor, because, had there not been objections to the report, it is likely that a chain of punitive action would have followed.

It is imperative that when transnational criticisms, with a view to recriminating action, is undertaken, there is accuracy and independence. Not taking any cue from me, but finding himself in the same lane, Republican Senator Bob Corker, chairman of the Senate Foreign Relations Committee, has threatened a subpoena in his demand that the State Department hand over all the documents used to rank countries in its annual Human Trafficking Report.

I don't know who Corker fought with, but somebody in Washington seemed to have skewed and thus tampered with the original report. The State Department had set up an office to "independently grade countries' efforts to fight human trafficking".

But of course, that is in itself nonsense, because one cannot establish an agency that is accountable to oneself, which also investigates the parent entity. Moreover, this very same State Department can then form its own opinions and act as an international policeman and then also apply international judgments.

The flaw in such an arrangement is obvious. Who independently investigates the USA? Any punitive action by this methodology is extrajudicial and inconsistent with the rules of natural justice. What really is needed is not a Department of State agency, because no matter how professional and independent-minded the functionaries and technocrats are, they ultimately are under the guidance and dictate of politicians.

Thus, not surprisingly, as I suggested last week, Reuters revealed that senior US government officials forced the experts to rewrite the script. The UN is the best agency for monitoring international legal standards; not the US, which has itself fallen short on various issues when examined by the UN and other multilateral agencies. Note, for example, the recent historic nuclear arms agreement that President Barack Obama has heroically forged with Iran. Among all relevant states, only Israel, whose prime minister, with complicity by a hostile and disrespectful Republican Congress, insulted 'our' president in his own 'house', has opposed the treaty.

For the record, elements in Congress opposed it as well, hours after its being reached, without even reading the contents. And for the record, the UN does have an Office on Drugs and Crime that deals with human trafficking and migrant smuggling.

The global struggle for universal human rights is too important to leave in the hands of a few politicians in any single country. Let us stand with the US in 'writing' the wrongs in order to right them.

• Dr Orville Taylor, senior lecturer in sociology at the UWI and a radio talk-show host, is the 2013-14 winner of the Morris Cargill Award for Opinion Journalism. His just-published book, 'Broken Promises, Hearts and Pockets', is now available at the UWI Bookshop. Email feedback to columns@gleanerjm.com and tayloronblackline@hotmail.com.