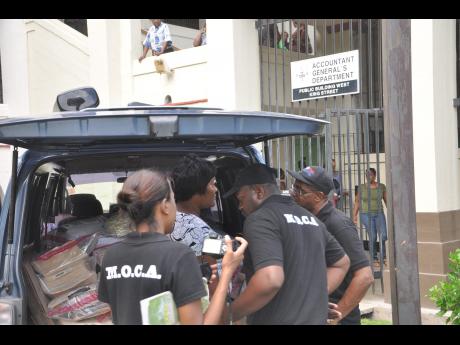 Jermaine Barnaby
MOCA officials are part of Jamaica's law-enforcement apparatus geared towards cracking down on criminal enterprises. Guest columnist Kayode Smith explores how POCA and banking regulations can have exploitative and disruptive effects on an accused.

Recently, I was reminded by a good friend that where I see a lacuna, instead of simply commenting on it, I should take action to fill it. This is my attempt to do so.

Prosperity Limited v Lloyds Bank Limited (1923) 39 Law Times Report 372 is a decision of the United Kingdom's High Court, Kings Bench Division. Many may not have ever heard about it, but the ramifications of the decision have, and will continue to have, a lasting impact on our shores and our lives.

In Prosperity, the court had to decide two issues. First: Whether a month's notice from a bank of its intention to close one of its customers' account, which is in credit, sufficient notice. Second, the court was asked to grant an injunction to prevent the bank from closing the customer's account.

The court held that one month's notice was insufficient, and, second, it refused to grant the injunction sought on the basis that the court would not grant an injunction that it could not supervise, and further that the court should be chary to interfere in the private contractual relationship between bankers and their customers, as it would be forcing the bank to undertake a business relationship and/or an agency relationship which they had no desire to continue.

Now, I could not fault you or anyone for thinking that the banks could only exercise this power in the event that the customer had been shown to have done an illegal act or some other act which the bank(s) consider as reprehensible. Unfortunately, you would be sorely mistaken.

government agencies such as the Asset Recovery Agency, Revenue Protection Division and the Major Organised Anti-Corruption Task Force (MOCA) have been given wide powers to make applications to the Supreme Court to restrain a citizen's assets, described as rea-lisable property, in the following circumstances:

a) A criminal investigation has been started in Jamaica with regard to the offence;

b) Proceedings for the offence have been commenced in Jamaica and have not been concluded; or

c) The enforcing authority has made an application under Section 5, 20, 21, 26, or 27, which has not been determined, or the court believes that such an application is to be made.

You should note that the definition of 'realisable property' is:

a. Any free property held by the defendant; or

b. Any free property held by the recipient of a tainted gift.

You should also note that the definition of 'property' is:

b) All forms of real or personal property; and

c) Things in action and other intangible or incorporeal property.

Immediately, you will note that there is absolutely no requirement for a conviction before your assets are restrained. The rationale that has been given for this, and argued in court, is that the assets of the accused need to be restrained in order to prevent dissipation. The question that comes to my mind, however, is, what is sufficient evidence of dissipation? Is someone taking money out of their account to pay their lawyer's fees evidence of dissipation?

As far as I understand it, as soon as the signed and sealed restraint order is received from the Supreme Court, it triggers flags in the banks' electronic systems. Shortly thereafter, the bank's only interest is to sever the relationship with the customer.

In a matter I have been involved with, as soon as the matter was complete and my client, 'AB', was vindicated, the bank proceeded to close every single account that had AB's surname attached to it. This included those of his wife, his children and those of his businesses.

This is despite the near 30-year relationship they enjoyed and also despite AB winning his cases in the Resident Magistrate's Court, Supreme Court, and Court of Appeal, and repelling the Asset Recovery Agency's attempt to forfeit all his assets and confiscate the cash they seized from his office, his personal and business accounts were closed. Interestingly, AB has not been able to secure current accounts for his businesses from any of the remaining commercial banks in Jamaica.

Naturally, AB thought that this course of action by the banks was unfair and instructed us to take action on his behalf. However, it has already been decided that AB has no valid case against the Bank of Jamaica for the manner in which he has been treated by his own bank and the studied refusal of any of the remaining commercial banks in Jamaica to accept and open current accounts for his businesses.

The basis for that decision is the Prosperity case and the fact that the Bank of Jamaica Act does not give the Bank of Jamaica any supervisory powers to intervene in the relationships of banks and their customers. AB, therefore, has hit a legal brick wall.

Also, bear in mind that Section 101 of POCA makes it illegal for anyone in Jamaica to have more than $1,000,000 cash in their possession, without reporting same to the authorities! So on the day that the bank returns all of AB's cash to him from his several accounts, the police can arrest him for a further breach of POCA. That is all contingent on the police getting to AB before the crime monster engulfing Jamaica does!

Other questions which come to mind are:

n In a modern society, do citizens have a right to operate a bank account?

a. If not, what provisions are being put in place for citizens who banks refuse to open and/or maintain accounts for?

b. Can they open an account with the Ministry of Finance (Financial Investigations Division or Asset Recovery Agency), Bank of Jamaica, Revenue Protection Division or some other government entity?

- Do alleged and/or convicted criminals have a right to operate a bank account?

To my mind, these questions are all necessary, as in future I am anticipating that there will be a small but growing section of the population that will not be able to secure and/or maintain banking services. Where will they store their cash? A mattress can only hold so much!

- Kayode Smith is a barrister-at-law and associate attorney-at-law, Ballantyne, Beswick & Co, and e-tutor at the University of the West Indies, Open Campus.

Email feedback to columns@gleanerjm.com and kayodeosmith@gmail.com.