The Gavel: Who is lying... We need truth on prison talks 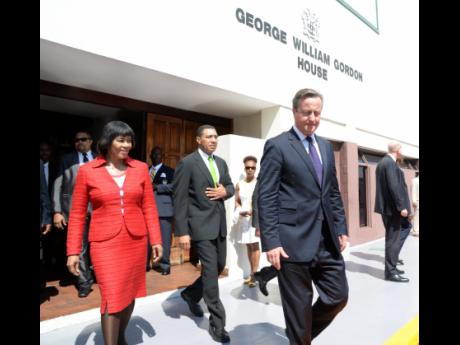 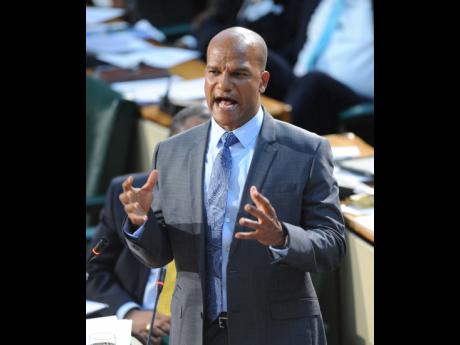 Having boasted so much about restoring Jamaica's good name in the international arena, the Portia Simpson Miller -led Government is certainly doing a good job of transporting Jamaica back to the back quarters of colonization and bowing to Backra Massa.

It has been 13 days since British Prime Minister David Cameron appeared on our shores and announced that his Government would be giving money towards the building of a new prison. Before this, not a word had come from our Government.

In addition, the Prime Minister's Office in Britain has since September 30 said that "an agreement between the UK and Jamaica allows Jamaican prisoners serving time in British prisons to return home".

And despite claims by National Security Minister Peter Bunting that Britain has been told to correct the information, it remains on the website.

One now has to seriously question whether there is an inaccuracy, as alleged by Bunting, or a deal has been struck and our Government has been lying to us.

Simpson Miller's administration has been losing marks rapidly since Cameron set foot on Jamaican shores and its credibility is being seriously impaired the longer it takes for this matter to be resolved. Though quiet diplomacy, the Government must get the British High Commisison to issue a statement that it erred and that the information on the website has been corrected.

We have seen where quite diplomacy caused the US to backtrack on an aspect of the United States Government withdraw an assertion made in a publication of the State Department that Internet freedom in Jamaica was under threat as the Government has been monitoring private online communications without appropriate legal authority. This was done within 72 hours of Jamaica objecting to the report.

Recently, the British High Commission said it did in fact request that there be no questions from the press during Prime Minister David Cameron's visit to Jamaica earlier this week. The comment vindicated Sandra Falconer, the defector information minister.

It therefore makes the stand-off over whether a deal has been struck one that is in need of urgent clarification. The fact that 13 days have passed and Britain has not budged is not a good sign for the Government.

A clear statement must come from Britain indicating how it came to post what has been placed in the website.

Holness last week led a telegraphed walk-out of the House of Representatives over the much hyped prison transfer deal which is being discussed with Britain. For him, the deal is closer to being consummated than the Government is prepared to admit.

It was not the first time that Holness was leading a walk-out of the House, and yet again it was neither necessary nor effective. It was not as if Bunting, the national security minister, was being evasive or rude in his answers. Holness simply needed to make a statement, and without regard to the Standing Orders, he did so and made his point.

For those who are not familiar with the Standing Orders, whenever a statement is made by a minister, the opposition spokesman may make a brief statement in response, but all other utterances must be questions.

On Tuesday, Speaker Michael Peart, as he as so often done, relaxed the rules and allowed every non-minister to make statements instead of confining themselves to asking questions. Holness took advantage of this and after asking a few questions he cleverly breached Standing Orders and exposed Bunting as being arrogant.

Bunting took the bait, using the opportunity to knock down Holness.

"I think the Leader of the Opposition is being delusional. He obviously believes that for the brief period for which he was prime minister he can still continue to give those types of instructions to Cabinet ministers. He is not in that position anymore and I am not taking any instructions from him and that is final," was Bunting's strong response.

Holness had himself sought to put the national security minister in his place by instructing him to abandon talks with the UK over the prison transfer deal.

It is clear that elections are not too far off and Holness is doing something to shed the impression that he is a weak leader. Simpson Miller needs to follow suit and show that she is not as useless as a large portion of Jamaicans have concluded.

The politics aside, it would be a good thing if the Opposition gives the select committee a chance to work.

This committee, which was proposed by this writer, would be tasked with examining all the issues relating to the new prison and Britain's £25 million gift which comes with the baggage of 300 prisoners.

Holness' stridency on this matter could be forgiven as passion because, unlike Simpson Miller, he has demonstrated better leadership on the issue of reparation, which has become emotionally interwoven with the new prison garb.

In his address to the joint sitting of parliament, Holness was far from being as mealy-mouthed and weak-kneed on the matter as Simpson Miller was.

Indeed, while Simpson Miller ran past the issue, almost seemingly afraid of offending Cameron, Holness was clear that Jamaica would not be moving on from the brutal era of slavery, at least not yet.

"We appreciate the view expressed that our relationship should be forward looking. Nevertheless, I also believe that there must be genuine commitment to finding ways of repairing, what is universally agreed to be the wrongs of the past," Holness said.

When she spoke, Simpson Miller said that while Oliver Cromwell's Western Design did not, initially, identify Jamaica as a target for conquest, the country has emerged over the past 360 years as "a contributor to British cultural, economic and political power".

"During the first 200 years of colonial rule by Britain, Jamaica became the world's largest sugar exporting country," she said.

The Prime Minister said further that as we continue to build our economy, the UK-Jamaica partnership has been vital to Jamaica's economic programme, including our debt-management efforts.

And almost as a suck up to Britain, she said that "the UK Government's provision of substantial bilateral debt relief, has been a major contribution to Jamaica's economic programme."

Were it not for Holness, Cameron might have left Gordon House feeling that the calls for reparation were nothing but noise from a bunch of wayward Jamaicans who did not even have the backing of their political representatives.

Such a pity Simpson Miller failed to recall that the Parliament - with not one dissenting voice - voted for Jamaica to go to the International Criminal Court to seek reparation for the ills of slavery.

If Simpson Miller was so fearful of raising the reparation issue in the Parliament, one wonders whether she really raised the matter in the bilateral meeting with Cameron.

Thankfully, former Prime Minister P.J. Patterson has stepped in to make it clear that Jamaica takes the issue of reparation seriously.

"The 180 years of slavery in Jamaica remain fresh in living memory. There are people alive in Jamaica today whose great grandparents were a part of the slavery system and the memory of slavery still lingers in these households and communities," Patterson wrote.

"To speak of slavery as something from the Middle Ages is insufficient. For our communities, its legacies are still present in their memory and emotions. To reject this living experience is to repudiate the very meaning and existence of these people's lives.

How can we simply forget it and move on to the future? If there is no explicit admission of guilt now, when will be the proper time?"