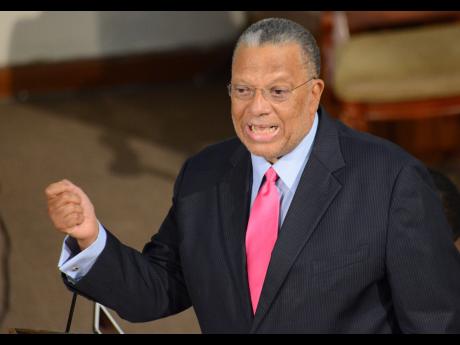 Matthew Samuda is on the hunt for the truth buried in the murky underbelly of Jamaican politics. Or is he?

In an impassioned presentation during last Friday's sitting of the Upper House, Senator Samuda called for a "truth and reconciliation commission to be able to clear the air once and for all on many issues that have bedevilled this society".

But the devil of his bedevilment is in the details. For Mr Samuda, ever the partisan, doesn't seem to be really interested in digging up skeletons except for those clad in orange. He is insistent that Peter Phillips, the opposition leader, explain why he, along with Omar Davies, attended the funeral of notorious gangster William 'Willie Haggart' Moore in 2001.

In a matter of minutes, what appeared to be a well-intentioned plea for transparency and truth quickly metamorphosed into a political slingshot war of tit-for-tat.

Don't go there, Mr Samuda. For if a defibrillator could revive your memory long enough for one last gasp, you would recall Eddie Seaga at Jim Brown's funeral and Delroy Chuck's (he's the justice minister now, right?) panegyric to Andrew Phang at his final goodbye. Of course, Brown and Phang were upstanding public citizens.

Among them is Paul Burke's revelation that it is a years-long tradition of the People's National Party (PNP) for functionaries to collect an agent's fee, of about 1.5 per cent, on state works contracts landed with political administrations.

Paul Burke is no neophyte. Paul Burke is no peripheral figure. Paul Burke does not speak off the top of his head. Paul Burke has been a part of, and knowledgeable of, the inner sanctum of the party's political machinery for years. If fish deh a river bottom and tell yuh seh alligator have gum boil, believe him.

Mr Burke, who was up to recently the general secretary of the PNP, is a credible voice. Yet despite his admission of knowing of PNP corruption, the party did not sanction him with dismissal.

In a stinging rebuke of Mr Burke, Mr Davies said: "You claimed that it was customary the agent would be named by the minister with portfolio responsibility for the relevant sector. You then specifically alluded to a particular large project, which was being implemented, and asserted that based on the level of expenditure on that project, the agent's fee would have amounted to between US$10 million and US$12 million."

The question still remains, who pocketed that money, how much of it was used in off-the-books electioneering and vote-buying, and how much more was thrown in the washing machine for personal enrichment? I refuse to believe that Paul Burke fabricated this out of mid-air.

Since the public spat between the stone-throwing Mr Burke and the squealing Mr Davies, the PNP's damage-control conciliators have apparently got both sides to put down their guns. It has been swept under the carpet of forgetfulness. But has it?

The public was told that both the PNP and the Office of the Contractor General were investigating Burke's salacious claims, but one year on, we have heard nothing. Are we to assume that Mr Burke misspoke? Hell no!

Peter Phillips, who recently took over the mantle from Portia Simpson Miller, has been eager to characterise the Holness administration as on a corruption roller coaster, particularly with the prime minister's desperate vote-catching charade of cutting bush. But he has yet to convince the Jamaican people that a PNP administration under him will come with clean hands.

What reforms has the PNP implemented to prevent a Trafigura-scale scandal from resurfacing in a new administration? What governance mechanisms are in force that will red-flag party operatives who, with or without the hierarchy's imprimatur, would seek to collude with transnational business actors to line personal pockets or lubricate party side accounts that will perhaps influence state contracts? What sanctions have been enforced against those who breached basic integrity?

Phillips was himself a minister of works at the turn of the century? Were agent's fees collected during his tenure?

The PNP president, busy pressing flesh in photo ops everywhere, has not been the most vociferous cheerleader on transparent political party financing, and the related legislation, flawed as it is, has been in abeyance since before the 2016 general and local elections. Where is his outrage?

Peter Phillips, if he is to be seen as credible, must exhibit as much zealotry in cleaning up corruption in the PNP as he is in purging the JLP Government of its own turpitude.