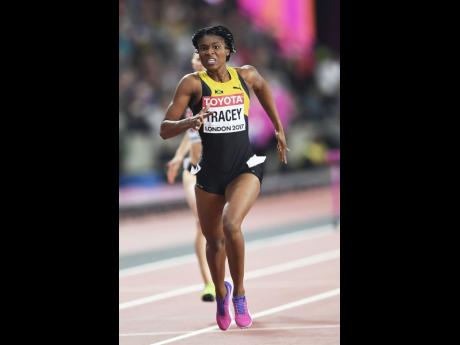 And so it ends. A disappointing campaign at the IAAF World Athletics Championships in London, bookended by reports of a catfight between two members of our mile relay team, moments before the final.

When the Legend pulled up with cramp on the final leg of the men's sprint relay, a few people would have wondered what else could go wrong at a track and field extravaganza that promised so much but ultimately delivered so little. None of those persons could anticipate that an argument over clothing could rob the country of the chance to add lustre to what has been an unpleasant outing in London.

Yes, Jamaica won four medals, a better return than 26 other countries who were also on the overall medal table. And, yes, it's good to see those who disrespected Omar McLeod after his achievements in Rio having to eat humble pie after he won what tuned out to be our only gold medal.

But given the country's record of having won 111 medals in World Championships history, comprising 32 gold, 44 silver and 35 bronze, and a reputation burnished by its dominance of the sprint events at recent editions, there was every right to expect that London 2017 would prove a happy hunting ground for Jamaica.

However, between the time The Legend crossed the line for third and an argument over whether the women's mile relay team should wear their black outfit or the yellow kit, disrupted the mood and forced one member to stand down from the team, the 2017 World Championships has left Jamaicans feeling bilious.

And it's precisely because there has been so little for Jamaicans to celebrate in London that I have reacted with schadenfreude at how we have celebrated the medals won at this event. I confess to still being vexed with many people who belittled the achievement of Asafa Powell when he won bronze in the 100 metres at both the 2007 and 2009 World Championships in Osaka and Berlin, respectively. Aligned with his failure to win an individual gold at the Olympics, Powell was written off as a waste of time and a runner for profit, who only turned it on for the Golden League (became the Diamond League in 2010) races when big dollars were at stake.

Many spat on his achievements, asking, "A weh bronze a go?", while noting that a bronze is effectively no medal. This was a similar mindset to those who, a generation earlier, had derided the great Merlene Ottey and soiled her reputation with that nasty moniker, 'Bronze Queen'.

So imagine me having a rueful smile on my face when my office erupted in an orgasm of joy when the brave Ristananna Tracey dug deep and overhauled two-time World champion, Zuzana Hejnova from the Czech Republic to take bronze in the 400 metres hurdles final. It was a tremendous achievement from a woman who had advertised from she was a girl at Edwin Allen High that she had the talent to mix it with the best in the world.

Let me be clear: 'Rista's' bronze medal deserved to be celebrated under any circumstance. In fact, any athlete who makes a final at a major championship deserves a pat on the back. But among the many who cheered wildly as Rista won her bronze were people who have previously said that Asafa's bronze was worthless.

So in the time of plenty, when The Legend broke records and gold medals in the sprints were a certainty, Asafa's bronze medals could be disregarded, and it was fair game to disrespect him. But now that times are thin, amid the confluence of factors that caused an abatement in the gold rush at the London World Championships, a bronze medal is getting the respect it deserves.

Warren Weir's retirement has been met with some unpleasant comments from many who see his Olympic bronze and World Championships silver medals as nothing special, simply because he never won gold.

Both The Gleaner and Observer gave Ristananna her due with front-page coverage the morning after her bronze medal effort. My granny always spoke about 'scornful dog eat dirty pudding'. I see many of us chewing right now.