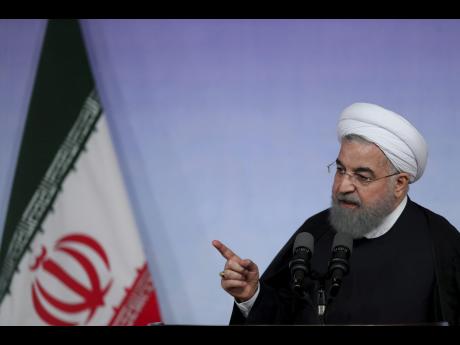 Five months ago, during Donald Trump's visit to Saudi Arabia, he was invited to open the Global Center for Combating Extremist Ideology. (I'm not making that up.) The huge, darkened room they were in looked like a cross between a starship bridge and a television control room. And there was a photo op, as there always is at these events, but this one was different.

There was a glowing orb on a pedestal, with the continents in black and the seas in pale grey. Trump, King Salman of Saudi Arabia, and Egyptian dictator General Abdel Fattah El-Sisi all put their hands on it as if they owned it - and held the pose for almost two minutes.

The radiant globe (and the illuminated floor) lit their faces from below. If you want to make somebody look evil, light the scene dramatically from underneath, and they did look evil in a comic-book sort of way. Like the three witches in Macbeth, suggested conservative commentator Bill Kristol. And everybody knew that their curses were aimed at Iran.

Now Trump has directed more curses at Iran, declaring that he will pull the United States out of the 2015 agreement that prevents Iran from developing nuclear weapons for the next 10 years. Or rather, he has announced that Congress will do that - but the Republicans probably don't have enough votes in the Senate to make it happen.

Why didn't he do it himself? Maybe he just wanted to share the blame. Every one of Trump's senior officials and advisers has told him not to do it, and so have all of America's allies. Every other signatory to the treaty Britain, France, Germany, Russia, China and the European Union also says it will continue to abide by it no matter what the United States does.

Trump says Iran is cheating on the deal, but Yukiya Amano, head of the International Atomic Energy Agency, said Iran is implementing it faithfully, and all the other signatories agree. Trump doesn't like the fact that Iran tests ballistic missiles, or supports dictator Bashar al-Assad in Syria, and says they are against the "spirit" of the treaty, but those things were not part of the deal.

And why does Trump want to kill the treaty anyway? One reason is that he is pursuing a bizarre vendetta against ex-president Barack Obama, seeking to erase every one of his legislative and diplomatic achievements regardless of their value. But he has also fallen in with bad company.

Trump really is one of the three witches now: he has joined the alliance of conservative Arab states against Iran, although it doesn't serve any imaginable US interest to get involved in a war between Saudi Arabia and Iran. You can blame that choice on Trump's ignorance, perhaps, but Saudi Arabia and Israel are run by well-informed and intelligent people. Why do they want to cancel the nuclear deal?

On the face of it, it makes no sense. If your choice is between Iranian nuclear weapons some time after 2025 (if the treaty isn't renewed or extended before then), or Iranian nuclear weapons in one or two years' time (if it is abrogated now), why would they prefer the latter? Yet they do. Their unspoken calculation may be that if the nuclear agreement does get trashed, then there will eventually be a war but the United States will be on their side.

There is no doubt that Trump can pull out of the treaty, even if Congress will not do it for him. He just has to declare new sanctions against Iran, which is well within his power. And if he does, other Western companies trading in Iran will find themselves banned from the huge American market unless they go along with the ban, so they will probably comply no matter what their governments say now.

But even if all that comes to pass, Trump cannot stop Iran from making nuclear weapons once the treaty is gone. The United States would probably suffer no grave damage as a result, as it is a long way from Iran. The Arab states and Israel could suffer greatly, but turkeys vote for Christmas all the time.

Gwynne Dyer is an independent journalist whose articles are published in 45 countries.