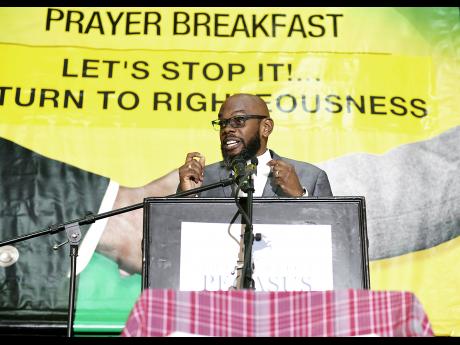 Last week, Astor Carlyle, pastor of Webster Memorial United Church and guest speaker at the National Leadership Prayer Breakfast (NLPB), called for a moral revolution. He told the audience that we are faced with moral challenges such as lewdness, crudeness and rudeness, and how we respond with our moral choices will have moral consequences. He prescribed in graphic terms the need for a "circumcision of the heart".

The Jews circumcised their males on the eighth day, believing this made them different, special and having certain entitlement as the children of God. The sign of the Abrahamic covenant was, according to Genesis 17:10-11, the ritual of circumcision. The covenant parties were God, Abraham and Abraham's descendants. God promised Abraham that he would be the father of many nations and would receive the Promised Land of Canaan (Genesis 17: 1-8).

However, Carlyle moved circumcision from the physical to state that the heart - the seat of emotions, understanding and will - needs circumcision. What needed circumcision was not something we can touch, taste, smell and eat, but our desire, our attitude, our values, our vision of reality. This moral revolution must help us determine what is right from wrong, which behaviour can be tolerated, and what are our moral values and what we consider to be in the interest of the community.

Though Carlyle used Judaeo-Christian language, he was calling the nation as a whole to come to a consensus by all Jamaicans being part of the conversation. He used prophetic symbolism to drive home the point that everybody should have a voice and a vote about this moral agenda.

The pastor reached out to Rastafarians by singing a Buju Banton classic Untold Stories, which highlighted injustice. He could have quoted the lyrics, but instead sang them, thereby affirming the singer, the song, and the songwriter. Carlyle was saying that wisdom and wholesome morality are not confined to Christians. Furthermore, Buju is incarcerated on drug charges. Carlyle was saying that even persons behind bars should have a say about what this moral revolution should look like.

Indeed, a moral revolution is necessary, otherwise murder, lawlessness, corruption, vigilante justice and sexual assault will overwhelm us. This moral revolution needs to be given prominence, with a strategic plan, adequately resourced and with personnel to see to its oversight. This moral revolution should lead us to value all human life, to place zero tolerance on corruption, affirm equality before the law and God, and ensure that every Jamaican has access to the basic goods and services, opportunities and resources for all to live in decency and die with dignity.

This is where the Jamaican Church comes in with our moral legacy informed by our religious heritage and folk wisdom to produce policies and actions committed to the cause of the moral revolution. The task is too great, the task is too necessary, the task is too significant, and too urgent for this sermon to be seen as a nice talk only.

It was, therefore, disappointing that the leaders of the NLPB rushed in the end by omitting saying the national pledge, which is a sign of our commitment to a moral revolution. We can spend five hours at a funeral, sing a chorus that was not on the programme, and ensure that a vote of thanks is given to sponsors and attendees while missing an opportunity for a collective commitment to a moral revolution.

It is not too late for a moral revolution to be on the nation's agenda again.

- Devon Dick is an author and Baptist pastor. Email feedback to columns@gleanerjm.com.