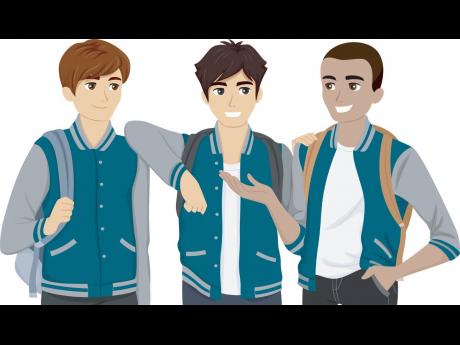 “My son is under a doctor’s care today and should not take PE today. Please execute him.”

Since my father and mother never saw my report card or homework book because I relieved them of the hard labour of signing those useless documents, this is the kind of explanation I might have written. However, my older cousin, Cynthia, used to cover for me as I covered for her, so there was no need to write.

In only my second year at elementary school in Trinidad, I learnt about ‘breaking biche’ (pronounced ‘bee-shh’). It is the local expression for truancy. ‘Breaking biche’ of ‘L’ecole biche’ means leaving home as if you were going to school or leaving school as if you were on your way home, and then exiting stage left to parts and places desirable but hopefully unknown to the police, principal or parents.

The origin of the phrase is French. ‘L’ecole’ is ‘the school’ and ‘biche” comes from ‘bisse’ which is from ‘bissoniere’ to ‘play truant’. My friend Ross, from Siparia, my hometown, had created a tree house in which he resided after leaving home in the morning until the other kids were returning.

In his entire life, he never worked (supported mainly by ladies) and the only thing he studied was how to mark cards and what time football practice or a wake would start. At one point in my life I wanted to grow up to be like him but when I heard about the experiences of Ross and two other boys from the neighbourhood, Boyie and Bread Boy, in the Youth Training Centre (YTC), a jail for underaged boys, I stuck to my books.

A group of boys from the post-primary class in the school I attended in the city, literally big men in short pants, headed by one youth we knew as ‘Saddle Head’, was lined up in front of the entire school. Most of my classmates were from Laventille, even then a tough place to live or visit.

Our school, aptly named Picadilly E.C. after the street on which it was located, was truly a circus that could rival the one in London.

A magician, Jang Bahadoor Singh, who charged five cents per student to attend his show, was mugged and robbed in the intermission. While his act was of a very poor quality, he had survived all the other schools in which he performed intact. Our boys forced his retirement.

A teacher from the YTC was badly beaten and disappeared from the school. The full story was never told but he was a big man who thought terrorising and threatening the boys was the way to go, and he did.

So, there we were, the entire school, waiting for the proceedings to begin in the same way, I believe, crowds attended hangings in medieval times.

Standing stage right was the headmaster armed with his beloved leather strap, an instrument with which I was already very familiar. My father, for some reason, thought that the gentleman, despite lacking any principles, was the greatest principal of all time, and so when he was transferred from the school in our village to one in the city, I was sent there.

He once beat me very badly with a double-dose for smiling instead of crying, and while I did everything possible to avoid a recurrence, it is not my nature to stay quiet or not get into mischief.

It was tough on Saddle Head and the other boys. They were already deemed failures by everyone, including themselves, because they had not passed the College Exhibition Examination (equivalent to the Common Entrance or 11-plus examinations). They were left mainly on their own to sit and hopefully pass the ‘School Leaving Examination’.

So what had the boys done? With nothing to do and their teacher Mr Gordon absent, they had left school for the day and went to the mudflats of an area on the bank of the Gulf of Paria known as Corbeau Town to hang out. In this case it was literally ‘L’ecole beach’.

It is difficult for me to blame them because, as I think of those times, I realise the extent to which we had failed that and future generations.

MANY WITH NO FUTURE

Right now, throughout the Caribbean, after every Caribbean Secondary Education Certificate (CSEC) examination, there are many children who have no future because our education system still does not harmonise with the job opportunities available and we feed them schooling without education and dreams which, for most of them, are unattainable.

When I drive through any country in the Caribbean at around 10 or 11 in the morning, I see them gathered, staring, some smoking, all thinking and planning. They generally congregate at a basketball court in the later evening and then they’re out for most of the night. They want the Nikes and the lifestyle but have no earning capacity except by their wits or through crime.

Saddle Head and my other classmates were beaten mercilessly that day and many other days to come, until they all left to become apprentices of tradesmen, hustlers or petty thieves.

One very rare spirit, a quiet boy, became a ‘pupil teacher’. A couple of the girls were sent to commercial schools to learn typing and shorthand so that they could qualify for book-keeping jobs in the civil service.

Others were sent to learn to sew or stayed home to get married or pregnant, whichever came first.

Those boys with big feet and with the right height, complexion and connections became policemen. Many still do, getting into the police service through ‘godfathers’ or contacts as Special Reserve officers so they could bypass the academic qualifications and then get accepted and subsequently promoted.

In a way, I am glad that some of the young people survive the pain of their schooling and find things to do that have meaning and money for them. But even that does not hide the dung heap on which our young people are dumped and which is growing higher and increasingly impossible to manage or ignore.

In some ways, this excuse from a parent to the teacher has, as in my case, more than a grain of truth in it but it does not deal with the whole story, “Please excuse Jim for being. It was his father’s fault.”

Tony Deyal was last seen shaking his head at this explanation, “Please excuse Jennifer for missing school yesterday. We forgot to get the Sunday paper off the porch and when we found it Monday, we thought it was Sunday.” Email feedback to columns@gleanerjm.com