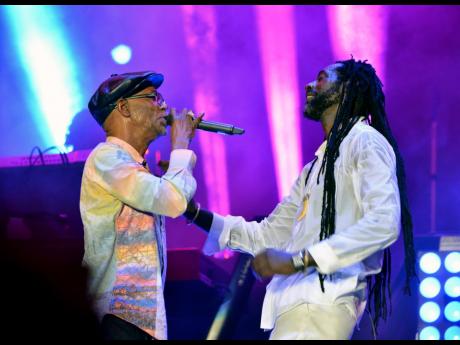 I read Nelson Mandela’s ‘Long Walk to Freedom’ twice. Compared to his 27 years of suffering for his people, Buju Banton’s prison sentence pales in comparison. So according the same name to the concert was inappropriate. How about ‘Not An Easy Road’?

That aside, what struck me first upon entering the stadium on the evening of Saturday, March 16, was the sea of plyboard used to cover the running track. Excellent choice. I bet that hardware store owner smiled all the way to his cash register.

Outside, I had observed numerous enterprising Jamaican purveyors of food, snacks, drinks, coconuts (dry and jelly), craft items, ganja, bottled water, phone-cards, sweets and more, as they sought to cash in on any windfall from the historic concert.

Seriously folks, my friends (local and foreign) and I got to the food court at Sovereign Centre at noon and it was jam-packed. We waited two hours at KFC to be served and during that time, I observed 12 persons who had stopped to eat on their way from the airport. They pulled their luggage upon leaving to get ready for the show. Their fake US accents confirmed my assumptions.

We cannot forget the informal, self-employed touts, ticket sellers and illegal parking lot operators. Not to mention the once-in-a-lifetime bed and breakfasts that sprung up because folks like my friend Pamella rented out their guest room for the weekend to friends from foreign, who could get no room in the official inns.

From my vantage point in the stadium’s grandstand, I counted close to 100 portable toilets, 50 tents, 50 trestle tables – all inside the stadium.

As for the fashion, there was everything from jeans with sexy top casual to beach chic, semi-formal with stilettos and everything in between. Fashion houses ought to be smiling, too, not to mention barber shops and hair salons.

So, whatever you think of Buju, the fact is, he has done more to sell Jamaica in one weekend than our year’s tourism marketing budget does for the year. This, I hope, will encourage the remaining glasshouse dwellers to drop their stones.

He should also be credited for gathering more than 30,000 well-behaved Jamaicans in one place... (minus the car thieves and those annoying vuvuzelas).

Visualise, if you will, 30,000 cell phones transmitting live concert activities to friends all over Jamaica/the world, and each of them sharing it with five others…absolutely mind-blowing.

Pretty much everything has been said about the show, except my two US cents worth.

The emcees did a great job of filling what would otherwise be boring downtime, and the DJ was superb.

At the 8:02 start, I reminisced on the bygone days when a few stage shows began on time and I was pleasantly surprised when act after act simply segued into each other sans lengthy band changes and unprofessional shouts of “mic check, mic check, one, two!”

I thought I had died and woken up in professional production heaven!

I almost concluded that the opening act (a son of the Gargamel) could not turn a tune, but quickly remembered that even frogs under water sounded better than Protoje and Damian Marley when they first sang in public … . The rest is now harmonious Grammy-winning history, so I closed my eyes, shut my critical mouth and sucked it up.

Delly Ranks shouted a bit too much for my liking, but Ghost delighted; Lust was mmmm, hmmm good, but Coco T sent things up several notches with his electrifying performance, and I was absorbed enough to stop seeing a chamber pot where his hat was. The mind plays tricks.

Chris Martin, Assassin, Gramps Morgan, Etana and Chronixx kept the crowd on its feet; the latter causing a few shouts of “me enjoy me money” from patrons close to me.

I loved the bold colours chosen by many artistes; it contrasted with Buju’s all-white attire – almost symbolising a purification of his soul as stage lights, the city’s humidity and performance energy sent buckets of sweat pouring out of his body all night long.

Many have asked why were there not several costume changes, but I think that when a real, hard-working man goes to work in the raging heat, he does not change clothes.

Buju’s opening number gave me goosebumps, and his reunion with Beres Hammond rendered me to tears. Their man-to-man hug spoke volumes. Forget the momentary rust in his vocals, he warmed up nicely, and the backing band was superb.

The brief sound problem saw the master calmly wait till all was well, and I figured patience comes easily when you are incarcerated, so what the hell.

He joked, he teased, he entertained, we wowed; he deserved the fireworks and, best of all, he delivered at home.

Barbara Ellington is a freelance journalist and former public affairs/lifestyle editor at The Gleaner. Email feedback to BNaedeneEllington@gmail.com and columns@gleanerjm.com.