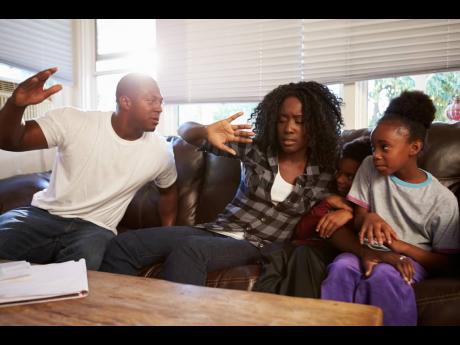 Domestic violence is rampant in Jamaica, with a large number of the victims being women. We tend to react with outrage or shock when one intimate partner kills the other or commits murder-suicide.

What is worse is that friends and relatives of the couple, especially the woman, encourage and expect her to leave the relationship. In most cases, the woman who doesn’t leave is called “the idiot gal” or it is believed that she is simply afraid of her partner, with the comment, “Mi coulda neva ’fraid a him”.

How we all deal with this problem is inadequate because we do not take into account the needs and motivations of the couple and what can be done to help them.

These couples tend to be emotionally dependent on each other, despite their dysfunctional relationship. Therefore, walking away from these bad relationships is not as easy because the partners believe they can’t do without each other.

Moreover, most times the couples have invested a lot of time and money in a relationship, in which they share property and have children, which makes it even harder to just leave, as most people expect.

We tend to mistakenly use the ability of couples with normal psychology that have functional relationship skills, clear and reasonable standards and expectations and who know how and when to end their relationship, as a way to understand couples in abnormal, conflict-ridden relationships who refuse to leave each other.

Psychological problems sustain these relationships of conflict for many years and leave relatives and friends of the warring couple feeling confused and helpless to act.

We have to look at how we raise our boys and girls within gender roles, especially those with attachment disorders that did not form secure attachment with their primary caregivers.

Too often, males, during childhood, are socialised to be in charge, take care of women and control them rather than treat them as equal partners through equally shared responsibilities in the home. Therefore, some men view women as lesser mortals, and objects of desire who should not be more educated, earn more money or question their decisions.

Similarly, some females, including those with attachment disorders, were socialised to play a subservient role to men or to use, berate and belittle men.

The central issue is, how can we address domestic violence as a society?

1. The first is the development of a national public health campaign targeting domestic violence, where people are educated about the causes, consequences, interventions and the referral services that are available.

2. The aetiology and response to domestic violence should also be taught in schools.

3. Public and private sector companies as well as universities and colleges should be encouraged to set up domestic violence committees to address the problem as it arise in these organisations. The success of this national campaign requires effective collaboration between the ministries of health, education, national security, justice and labour, the private sector and other civil society groups.

4. The basic training of police officers, soldiers, and correction officers should include the issue of domestic violence for their own professional care and, in the case of the police, the service they provide to victims.

Also, these public officers who have committed acts of domestic violence that have been verified should be mandated to get psychotherapeutic treatment.

5. Licensed firearm holders who are domestic abusers should have their licence revoked and firearm confiscated.

6. Children should be removed from homes with chronic domestic violence because it is a major adverse childhood experience.

7. Victims of domestic violence should be empowered to seek treatment and restraining orders from the court.

9. The renewal of firearm licences should require the holders to attend a two-hour domestic violence workshop.

10. Pastors, deacons and deaconesses, who are often the first point of contact for victims of domestic violence, should receive basic mental health training to guide these persons into treatment and care.

11. Psycho-education services should also be delivered by mental health professionals to the relatives of couples in conflict through community-based organisations, for example, churches, so that the relatives know how to effectively deal with the couple.

- Christopher A.D. Charles is a psychologist and senior lecturer at the University of the West Indies, Mona, and Geoffrey Walcott is a psychiatrist who works at Psychotherapy Associates, and the Caribbean Institute of Mental Health and Substance Abuse. Email feedback to CCHARLES@gc.cuny.edu and columns@gleanerjm.com