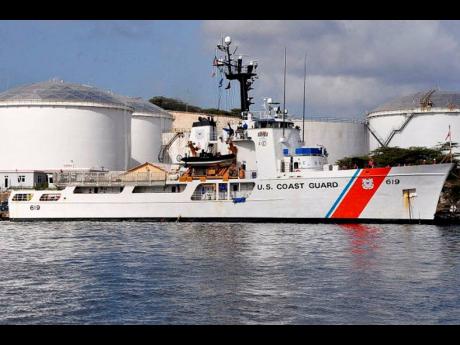 File
The US Coast Guard cutter ‘Confidence’ on which the five Jamaican fishermen were detained pending the Jamaican Government’s response to a request to prosecute them.

The shiprider agreement between Jamaica and the United States has as its principal objective the suppression of illicit maritime drug trafficking. This agreement is a natural consequence of our geographic location, with Jamaica laying as close as 500 miles away from the US.

At the time of the treaty, signed on May 6, 1997, ganja was practically illegal, for all purposes, in both countries. Also, Jamaica was a convenient trans-shipment point for cocaine coming out of our southern neighbour, Colombia.

The use of the waters outside of Jamaica has somewhat shifted since 1997 as, in the midst of our gun epidemic, we see a disturbing ‘guns for ganja’ illicit trade with a closer neighbour, Haiti. It’s no secret that we do not make guns in Jamaica and most of the guns that come here are manufactured and shipped from our treaty partner, the US. This huge problem must have justified us entering into the shiprider agreement, making it one of mutual assistance between us, which defines us as part of the civilised group of nations.

The agreement redefines sovereignty so that we are both entitled to waive it, thereby allowing our respective citizens to be the subject of the other’s law enforcement/administration of justice.

The mutual benefit of the agreement is subject to us respecting each other as equal partners, and granting humane treatment to our respective citizens who may, from time to time, be the subject of the agreement. Also, as circumstances change, we must be prepared to revisit and upgrade the terms of the original agreement, which concerns not just the use of the sea, but also air transportation. For example, should there be a redefinition of ‘illicit drugs’, given the legalisation of medicinal/recreational marijuana in Jamaica and some US states?

Further, with the passage of 22 years since the agreement was signed, what benefits regarding the prohibition of the use of the sea to transport drugs have accrued to the parties? Also, what are the statistics available to show whether there has been any benefits to us regarding the use of the ocean/air, to feed our gun epidemic alluded to earlier?

I have, as an attorney, had two unsavoury experiences with respect to the shiprider agreement. First, the Jamaican-registered boat Lady Lawla was, on the 20th November, 2009, returning from a fishing voyage, and upon reaching Jamaican territorial waters, was intercepted by Jamaican Coast Guard and escorted into Port Royal, where the boat was searched.

My client was prepared to subject his boat to a search by our security forces. What he was vehement about is that the Jamaican Coast Guard should not allow the US Coast Guard to search his Jamaican vessel, which was, at all relevant times, operating in Jamaican waters.

Legal opinion at the time on whether the US Coast Guard can lawfully search a vessel in Jamaican territory was divided. I recall that when the US Coast Guard team unlawfully came aboard my client’s vessel, I was also on-board. I asked the head of the team of coast guards for her name, but she bluntly refused to identify herself. This informed me that the protocol of members of the security forces in Jamaica being obliged to identify themselves to a suspect or his attorney was not a matter which the US Coast Guard was prepared to follow. I shudder to think of what that refusal signalled, should our citizens encounter them outside of Jamaica in international waters.

The invitation by Jamaican Coast Guard to the US Coast guard to search Lady Lawla was determined to be unlawful five years later, in 2014, when Justice David Batts reasoned that, once safely docked in Jamaican waters, Lady Lawla could not be searched by members of a foreign law enforcement vessel (the USA).

Second, in the same year the Lady Lawla judgment was handed down, it is alleged that another Jamaican vessel was intercepted by the United States Coast Guard 125 miles off the coast of Jamaica. The vessel was searched by the Coast Guard, who then informed the Jamaican authorities that 916 pounds of ganja was found aboard.

The four men on-board were held at sea for two days, while arrangements were being made between the US Coast Guard and Jamaican law-enforcement agents. The boat and the four men were escorted into Jamaican waters by the US Coast Guard, and, on arriving in Jamaica on December 14, 2014, only three of the men were handed over to our transnational narcotics police. The US Coast Guard handed over 10 pounds of the confiscated ganja to Jamaican narcotics police and left with 906 pounds, along with the fourth apprehended man, who is said to be from St Vincent and the Grenadines.

The Maritime Drug Trafficking (Suppression) Act, with its accompanying shiprider treaty, permits the United States Coast Guard to act on our behalf, to take Jamaican nationals found aboard a vessel with drugs, and hand over the crew, boat, and drugs to our law-enforcement agents. Section 20 (2) of the said maritime law permits our minister of national security – where a treaty state, having found drugs at sea, would normally take it into their jurisdiction for trial – to waive Jamaica’s right to enforce our domestic laws over the vessel, men aboard, and the illicit drugs found seaward of Jamaica’s territorial waters. No such waiver was granted to the US Coast Guard in the December 2014 case. The case was, therefore, entirely ours for prosecution.

The prosecution sought to have the men plead guilty to possession of the entire 916 pounds of ganja, but the written advice of the DPP (with whom I agree) was that the Jamaican authorities were, in the unhappy circumstances, constrained to act on 10 pounds only.

One further issue is left unresolved: Why did the US Coast Guard leave with a non-national over whom we had total jurisdiction? Furthermore, and most important, have we confirmed and have the US accounted for the destination of the 906 pounds of ganja? Let us not forget that ganja is legal in several states of the US for medicinal use.

This leaves a lot of unanswered questions regarding the bona fides of our treaty partner in the ‘fight’ against ganja. Is the US policing its own nationals who are growing and supplying the sellers of medicinal ganja in the United States? Is the policing of our waters by the US Coast Guard designed to protect American domestic ganja growers? Are we being taken for a ride where, rather than the shiprider agreement being one between equal partners on the face of it, is it one for the benefit of the stronger party only?

This is the natural fallout when the weak enters into a treaty with the mighty. It is the latter that dictates the terms, and can effectively break the rules of the game, while the weak dare not protest the loss of 906 pounds of ganja brought within their jurisdiction and the unauthorised removal of a suspect found aboard.

Perhaps, as George Orwell wrote in Animal Farm: “All animals are equal, but some animals are more equal than others.”

- Bert S. Samuels is an attorney-at-law. Email feedback to bert.samuels@gmail.com and columns@gleanerjm.com