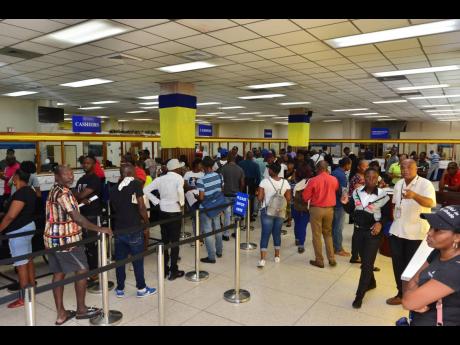 The Kingston tax office was crowded as persons turned out to conduct business as usual last Monday even with the fear of COVID-19 gripping Jamaica.

I am responding to The Gleaner’s article “Clarke chided for undercutting budget rules”, which appeared on Wednesday, March 18, and which provides excerpts from Dr Peter Phillips’ speech in his Budget Debate presentation.

The one-sidedness of Dr Phillips seeking to take credit for the general consumption tax (GCT) rate cut, having never credibly postulated how it could be afforded in a tight fiscal environment, while pounding the table on fiscal responsibility, is rather amusing. Recall that Dr Phillips proposed a two per cent reduction in the rate of GCT, which would have cost $20 billion, but it is difficult to recall any proposal from him to credibly explain how it could be sustainably financed. That was not responsible.

It is, therefore, ironic that he could believe that he is in any position to provide a critique when, in fact, it was thoughtful, strategic, and coordinated action over two years, by this government, that provided the resources for an unprecedented debt repayment of $73 billion as the route to sustainably achieve a 1.5 per cent reduction in the GCT rate and more.

Take note that his speech makes no reference to the “$73 billion repayment of debt” specifically as the counterbalancing measure for the “primary balance reduction”. This is the first sign of a biased account constructed to launch the kind of attack and misinformation campaign that many now see as his unfortunate trademark.

A more balanced critique would have been that “neither the $73 billion debt repayment nor the corresponding primary balance reduction” was included in the Fiscal Policy Paper (FPP), and this would have been worthy of coverage and a response.

It is that more balanced observation to which I will provide a brief response here with a more detailed account to follow in my closing Budget presentation.

Fiscal prudence requires that we remain on track to meet the 60 per cent debt target by March 2026 required under the amendments to the Fiscal Responsibility Law, which I worked to help pass in 2014 as an 0pposition senator.

As minister of finance, I was not prepared to countenance the announcement of a $73 billion debt repayment, and the corresponding primary balance reduction, until the vast majority of the $73 billion in resources was on hand. This required waiting for the success of the J$14 billion TransJamaica Highway IPO and the related TransJamaica US$225 million (J$31 billion) international bond issue.

My position would have been further buttressed by the complex nature of the TransJamaica series of transactions. The acquisition of TransJamaica by the Government was completed in December2019 and its debt holders immediately paid off by the Government as was required by change-of-control provisions in the debt agreement.

The acquisition of the shares and pay-off of the debt were achieved with the proceeds of a short-term loan to the Government that exceeded one per cent of GDP in size. This loan needed to be repaid from the proceeds of the international bond issue and IPO, both of which occurred after the finalisation and approval of the FPP.

Showing a lower primary balance and announcing tax cuts in the FPP without the contemporaneous assurance of having the large majority of the “money in the bank” as the source of the required debt repayment offset would not qualify as responsible policymaking. Thus, neither the proposed $73 billion debt reduction nor the primary balance reduction was included in the FPP.

By the time I opened the Budget Debate, both the TransJamaica bond transaction and the TransJamaica IPO were successfully closed and significantly oversubscribed. We now had the “resources on hand” that provided the assurance that we could make good on our policy of reducing Jamaica’s debt by $73 billion, or 3.3 per cent of GDP, during 2020-21. Only then did I announce this and the corresponding primary balance reduction.

Contrary to the attractive title of your article, no “rules” were broken. However, the experience does expose gaps in the process. Two important and complementary principles arise. The first is that economic policy cannot be frozen between finalisation and approval of the FPP in late January (for subsequent tabling) and the presentation by the Minister of Finance in early March.

The second is that ideally, we would want more periodic and structured opportunities for independent and technically informed commentary on the consistency of fiscal policy with the Fiscal Responsibility Law because policymaking is dynamic.

These are gaps that I have given much thought to and which informed my proposal for a Fiscal Council, which will require updates to our Fiscal Responsibility Framework. Rather than attack, Dr Phillips could have constructively given his thought on what is, essentially, a structural issue.

I will shortly be tabling the draft Fiscal Council Bill, which, among other things, seeks to entrench durable accountability of fiscal policy. In that bill, we seek to address this structural issue by proposing that the Fiscal Council not only review the FPP when tabled in February, and the interim FPP when published in September, but also comment in June and in December on Budget outturns and as needed otherwise. This empowers the Fiscal Council to ensure that Government’s policy commitments, tabled at anytime, are consistent with the Fiscal Responsibility Law.

I look forward to the tabling of this bill in the 2020-21 financial year, to the constructive thought, discussion, and debate that it will generate, and to the eventual passage and bringing into law of the independent Fiscal Council. Strengthening and building institutions is the cornerstone of achieving and maintaining economic independence, which is a central economic policy plank of the Government of Jamaica.

- Nigel Clarke, D.Phil., MP is Minister of Finance and the Public Service. Email feedback to columns@gleanerjm.com.