Ronald Thwaites | A matter of trust 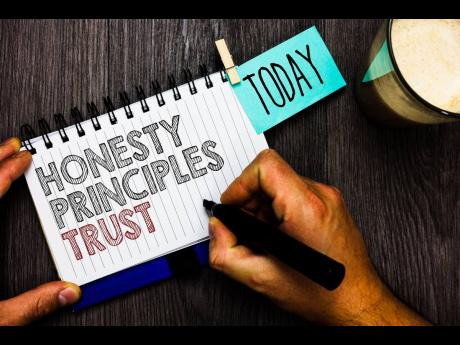 “Mi nevva know him good, but no man eva talk to me so nice. I did just trus’ him when him tell me him na go lef me.” Mitzie sat on the stoop of a yard on Wildman St, braiding hair in the effort to earn a Sunday dinner money for herself and her little son, sired by the same guy, long gone, who she had trusted when he promised her that “he na go lef” her.

Then there was the wife, stricken with cancer, to whom I provided service to make her last will and testament. Nothing in it for her husband, hovering near? “Don’t mention him, I haven’t trusted him for years. He’s here only because of the children,” was her pained and angry reply.

The greatest compliment paid years ago to my late cousin Tony Thwaites by Dennis Lalor was that once Tony gave his word, so trustworthy was he that no ‘paper writing’ was needed.

More recently, in the public sphere, there is chronic distrust – Jamaicans abroad donating from their substance to fight homeland crime, but vowing that “not one cent will the Government be able to touch”. Or the well-founded conviction that the Government cannot be depended on to be incorruptible in the contracting arrangements for the Montego Bay bypass.

Come with me to Gordon House and feel in your bones, and see and hear with your eyes and ears, the deep distrust and contagious scorn of both sides for each other, euphemised and masquerading as ‘healthy competition’.

At all levels, private trust and public trust are the scarcest commodities in the land. Because the police give abundant evidence that they are not confidential and can’t be trusted not to brutalise, and often kill (do we really yet know or care about what really happened on Trafalgar Road?), their effectiveness in crime-fighting is ‘colted’ and we try to substitute repression for confidence, the sweet fruit of trust.

Oh yes. We properly identify (no anonymously made, fuzzy video this time) and charge the guard who lick the slow-to-move market vendor in MoBay. Even as Marisa, Delroy, Andrew and the others look like they would, if they could, fling their green stools across the aisle, so as to shut up any effective parliamentary redress against their own ‘stool beater’. Trust betrayed by those most sworn to uphold it.

HAS TO BE MODELLED

Trust has to be built on truth and reliability. This virtue has to be modelled, not just proclaimed. It bespeaks respect, undergirds stability, and reduces stress. You get to ‘trus’ food at the corner shop because you have a trustworthy reputation. It takes time to develop and it is ‘key-soap’ hard to recover when broken.

When you ‘confident’ someone, you commit yourself to them; you give them power over you. It is a spiritual relationship higher and more sublime than a legal contract allows. It ought to incarnate the deepest and most honest relationship between individuals, and between the citizen and the State.

Trust is the currency which buys cooperation and goodwill. Mutual trust – the offspring of respect and the opposite of brutishness and ‘advantage-taking’ – is essential to decent living, the foundation of any sustainable, equitable social order.

Forfeited trust is what has left Mitzie to be a wounded single parent on Wildman St. Broken trust seems to be what had embittered the wife-and-husband relationship I mentioned earlier. The cynicism born of squandered trust by politicians and other leaders has led to disappointment, disengagement from the public sphere, and obsessive selfishness in personal affairs.

We need to rebuild trust at every level in the Jamaican society if we are to progress. Words alone have lost much of their currency. The religious communion to which I am attached is recreating a curriculum for our several schools modelling trustworthiness, based on stories of truth, faithfulness, commitment and hope. That should help.

We all fall short in the area of trust. But in a time of building back from the COVID-19 purgatory of bewilderment and depression, a single most constructive activity for everyone would be to intentionally foster trust where we see it lacking, to rebuild bridges of respect and mutual caring.

A happy memory of my childhood was being tossed in the air by my father. I had implicit trust that he would be there to catch me. He never failed.