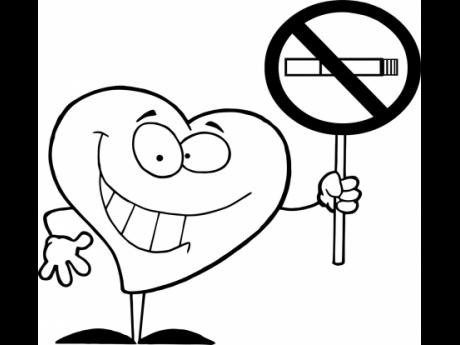 It is said, and not totally in jest, that the best way to stop someone from smoking in bed is to get a waterbed and fill it with gasoline. Any other approach might not only fail, but leave you feeling like an ash or make your partner behave like a beech. A young couple had been married for a couple of weeks, and the man was always after his wife to quit smoking. One afternoon, she lit up after some lovemaking and he said, “You really ought to quit.” She, getting tired of his nagging, said, “I really enjoy a good cigarette after sex.” He replied, “But they stunt your growth.” She asked if he ever smoked and he replied that he never had. Smiling, she looked him up and down, especially down, and asked, “So, what’s your excuse?”

When, 45 years ago, I went straight from three packs of cigarettes a day, to none, my excuses, or reasons really, were pride and worry about my children. I was playing poker in a ‘Recreation Club’ in Trinidad and, at about three o’clock in the morning, I ran out of cigarettes. Seeing that my friends had smoked out most of mine, none of us had any. One of the guys, we called ‘Poodooop’, went around the ashtrays looking for butts that still had a smokable bit or what we called a ‘zoot’. He brought me one and I greedily took a drag on it. Then I threw it away after taking stock of myself and what I had allowed smoking to do to my pride and concern about my children.

I had just graduated with a first-class honours degree. We were expecting a second child. I was the television producer in the Office of the Prime Minister. Yet, I was not just squandering money on something that guaranteed a horrible life, and an even more horrible death, but, in following my father’s footsteps with hard liquor and cigarettes, the odds were 75 to one that my children would do the same. Today is the anniversary of my giving up smoking and welcoming back, after a few more years, the ability to breathe deeply, play football without collapsing and to once more enjoy the taste of food and drinks. It was, and continues to be, a breath of free air.

Sir Walter Raleigh, the Elizabethan adventurer who brought tobacco to England, was smoking in his garden while contemplating his uncertain future when his servant, who had never seen tobacco before, started shouting, “Master’s head is on fire” and doused him liberally with water. Since then, smoking caught on like a house on fire and continues to burn a lot of people. Smokers are at their last gasp, but not the cigarette industry, or Big Tobacco as it is called. It is no sense saying that you pay twice for your cigarettes - first when you get them and second when they get you – while the tobacco industry continues to make big bucks despite recessions, punitive taxation, anti-smoking legislation and consumer advocacy.

You would think that the inconvenience to which smokers are put and the increasing cost of cigarettes would cause them to stop. Sir Winston Churchill, a cigar smoker like some of my friends, expressed this romantically, “Smoking cigars is like falling in love. First you are attracted to its shape; you stay with it for its flavour; and you must always remember, never let the flame go out.” The best way of pouring cold water on Churchill’s cigar is what I call seeing the light of dawn, which goes like this, “I offered Dawn a cigarette. She refused. ‘No thanks,’ she said, ‘I’ve already got cancer.’” Actually, people with burning cigarettes and the even more burning desire to get some nicotine into their systems, don’t really smoke. The cigarettes do all the smoking. The people are just suckers.

I now believe, from the evidence around me, that cigarettes are more lethal than guns because they travel in packs, and that while the mortality rate is almost the same for smokers and non-smokers, the difference is the timing, and the suffering. One of my colleagues commented that having a smoking section in a restaurant, or even a casino, is like having a ‘peeing’ section in a swimming pool. Yet, none of the criticism and quips seem to work. In places like China, Greece, Russia, Chile and Indonesia, tobacco consumption is increasing.

Even when you want to stop smoking, ending the addiction verges on the impossible. One man tried to stop smoking by using the nicotine patches you can get in the drug store. It was useless. He burnt his arms when he tried to light them. Another put them over his eyes. Now, he can’t find his cigarettes. Some smokers have no sense of time and place. One went into a drugstore smoking a cigar. The angry owner told him, “Sir, please refrain from smoking here, it is a public place.” Taken off guard, the man replied, “But it is only yesterday I bought those cigars here.” The owner quickly pointed out, “That is irrelevant, sir. We also sell condoms here!”

Pharmacists take a lot of flak and are the butt of many cigarette jokes like the story about two old ladies who were outside their nursing home, having a smoke when it started to rain. One of the ladies pulled out a condom, cut off the end, put it over her cigarette and continued smoking. The other lady asked, “What’s that?” Having been told what it was and that it helped to keep the cigarette from getting wet, she decided to get some herself. The other old lady directed her to the nearest drug store, where she asked the pharmacist loudly for a box of condoms. The pharmacist looked at the old lady strangely but politely asked her what brand she preferred. “It doesn’t matter,” the old lady said, “as long as it fits a Camel.” Needless to say, the pharmacist also had a fit.

I have become an anti-smoking militant like the pilot who told her passengers, “There is no smoking in the cabin on this flight. There is also no smoking in the lavatories. If we see smoke coming from the lavatories, we will assume you are on fire and put you out. This is a free service we provide. There are two smoking sections on this flight, one outside each wing exit. We do have a movie in the smoking sections tonight ... hold on, let me check what it is ... . Oh, here it is; the movie tonight is Gone with the Wind.”

In my case, cigarette smoking refuses to go with the wind, times and research. It is so insidious a vice that, even though I have become allergic to cigarette smoke, I still see myself in my dreams with a cigarette in my hand. However, I am one of the lucky ones. I stopped smoking because I wanted to. Nobody forced me; no doctor insisted; and no health issue precipitated my action. This is the only way you can stop permanently - you have to want to do it. No statistics, pleading by wives and children, coughing fits and heart problems, will get you off Tobacco Road. Even more, you can only stick to a decision not to continue with any habit or vice, if it is your choice. Nobody can stop you but yourself. If you are still smoking, even though its killing you, it is time to get off your butt.

Tony Deyal was last seen responding to the question, “What should you do if your boyfriend starts smoking?” Slow down. Send feedback to columns@gleanerjm.com