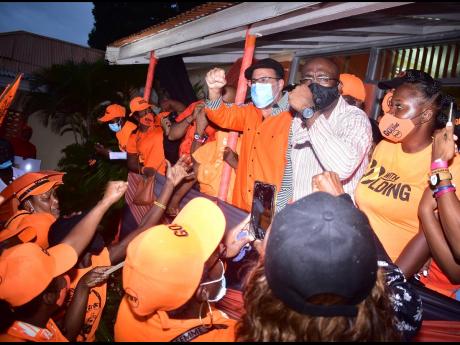 File
Mark Golding celebrates with fellow Comrades at PNP Headquarters on Old Hope Road in St Andrew in November 2020 after he was elected the president of the party.

Throwing the open vote for its leader to all its members – rather than a privilege exercised by select delegates – could well give new impetus to the floundering People’s National Party (PNP). It would certainly be a far more democratic way for the party to conduct its business. Which is always a good thing.

But while this newspaper acknowledges value in this proposal – with which the party has flirted since the 1970s – its president, Mark Golding, should be wary of overinvesting in the idea as a magic potion to lift the PNP out of its long crisis that manifests itself as a dysfunctional divisiveness, which played a huge part in the PNP’s defeat in last year’s election. The Opposition party’s greater problem is its intellectual funk – its absence of ideas and constructive debate.

In that regard, the PNP will, if it is serious, find greater value in the work being done by the policy commission appointed by Mr Golding and chaired by Anthony Bogues. That, though, is assuming that Professor Bogues has found a way, from his seat at Brown University in Rhode Island in the United States, to bridge his own intellectual conceptions not only with the vision of the PNP brass in Kingston, but ideas of the party’s grass-roots activists across Jamaica. Rebuilding, or fundamentally overhauling political parties, tend not to last if they are mere top-down exercises.

We can only assume that Mr Golding understands these things. We also assume that the policy commission’s work is proceeding at pace, but quietly. It is our interpretation, too, that the voting suggestion (under consideration by the PNP’s structures review committee) is part of a larger connected whole.

That notwithstanding, if it adopts the system, there are other operational mechanisms to be considered for the arrangement to be both transformational and have utility. So, the good part is that if the PNP gets in a fight over this, it will be a bust-up over a substantive idea.

Expanding the party’s internal democracy, including thinking about new approaches for choosing its leaders, were the kinds of things discussed during its heady days of reassertion of democratic socialism under Michael Manley’s leadership in the 1970s. Yet, giving the vote to all registered members when choosing the party’s president, it did not emerge as a formal policy question until the mid-2000s, when a reform group that included long-time policy activist and former General Secretary Paul Burke succeeded in bringing it to the table. The idea ultimately stalled.

Should Mr Golding push it through, it would be among the most fundamental structural reforms undertaken by the PNP in the nearly nine decades of its existence. Taken to its core, the system would significantly deprive leadership candidates of the ability to massage, if not manipulate, the delegate structure which, some might contend, worked to Mr Golding’s benefit in last November’s leadership contest against the shadow foreign minister, Lisa Hanna. Indeed, there are questions about whether Mr Golding could have beaten Ms Hanna in a context in which all of the PNP’s reported 45,000 members were eligible to vote, rather than only 3,300 delegates, who come from chapters, some of whose legitimacy are sometimes questionable.

At the same time, though, the party will have to consider whether if by eliminating the opportunity to manipulate delegate structures, it does not reinforce another problem it wants to fix – giving a campaign advantage in leadership races to rich or well-funded candidates. Campaigns will now be genuinely national in feel and appearance and, therefore, more expensive. We will be reminded, of course, that that is the way they have been trending for nearly two decades.

That Mr Golding would institute an arrangement that might weaken the security to his leadership is to be applauded. Yet, with this proposal he is following the lead of several of the West’s major democratic parties, not least of which is the PNP’s spiritual ancestor, Britain’s Labour Party. Labour, however, has gone further beyond voting rights enjoyed by dues-paying members and registered affiliates, the latter being members of affiliate organisations.

Since 2014, party supporters who are willing to pay a fee and declare in their applications their belief “in the values of the Labour Party” can become registered supporters and vote in leadership contests. These groups played a significant role in Jeremy Corbyn’s improbable victory in the 2015 leadership election, even though his candidacy was considered a bit of a farce and was endorsed by a handful members of parliament to “broaden the debate” in the party. A year later, when Mr Corbyn was forced to defend his job because of a challenge, nearly 200,000 people signed up as registered supporters, even though the registration fee had jumped from £3 to £8.

Some of these registrations were likely by people who were anti-Labour and intending to be disruptive. The vast majority were Labour supporters who wanted to elect a left-wing candidate and push Labour further to the left. Some of these people subsequently left the party, but many stayed. Clearly, the PNP will have to determine whether Labour’s, or any other party’s, template can work for it – or is suitable for the Jamaican environment. However the PNP goes about selecting its leaders, it will be what it has to offer to voters. In recent times, that has not been much, except for the noise and fury of its fights.

It now has to get back to trading in ideas and how, if they were to be trusted with the government, it would address the problems of the Jamaican people. And we have to believe.