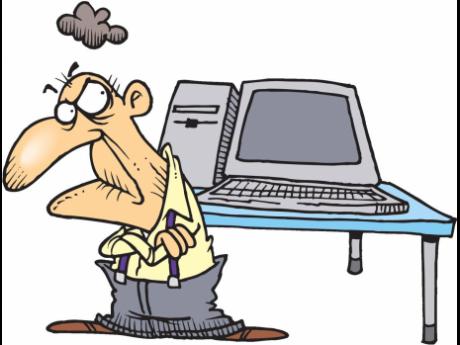 Today, Gandolf has us dependent on Internet. We can’t work or play without it. I’m still anti-tech so own neither cell phone nor I-Pad. Pads are to stop bleeding and cover cats’ feet. But I gotta have Internet!

The Old Ball and Chain issued another instruction.

Old BC: Folks, if I don’t decide what Old Grey Balls should do, like Nina Kulikova in a Ukrainian bathtub, he has nowhere to go. So I’m telling him to write about life without Internet.

Old BC: No buts. What happens when you’re left alone to decide?

Old GB: I married you didn’t I?

Old BC: I decided that.

Old BC: I’ll give you the first was unexpected but I decided the other two.

Old GB: I became a lawyer before we were married

Old BC: Maybe but I decided that too. It was MY friend Ainsley Elliott who set you in the right direction. You wanted to be a psychiatrist. Be quiet. Write about life without Internet.

As usual, I ensured I got the last word:

She’s talking about Digicel recently sending a team to our complex ostensibly to hook up a new customer. Before they left, our Internet disappeared.

But the back story starts when I was a boy before telephones were widely available. I remember when telephone first appeared in our home a genie called “Operator” was trapped inside. She answered whenever you dialled zero and connected you on request. One day she ran off with a man named Gandolf and was replaced by a “party line”. You shared your telephone with a stranger. Like today, no conversation was private. Doris Day and Rock Hudson made a movie!

Early telephones used rotary dial (hence “dial a number”). One day, after push-button phones were all the rage, the Ampersand’s visiting friend asked if he could use the phone to call home. He told us in distress the phone wasn’t working, but the problem was that it was something he’d never seen before, namely a rotary. Shortly thereafte, Old BC tossed it.

Then Gandolf invented the “Fax” (short for “facsimile”). My firm called an emergency partners’ meeting to decide on acquiring one. Senior Partner was dead set against it. “It’s a hoax,” he growled. “How can you put paper into a machine in Jamaica and it comes out in Australia? Humbug!”

Several years ago, Old BC threw out my obsolete Fax machine.

I waged a one-man anti-tech protest against computers until baby SputNik, aged 18 months, downloaded Word Perfect from the old clunker downstairs, typed his full name,. and printed it. I surrendered.

So, today, Gandolf has us dependent on Internet. We can’t work or play without it. I’m still anti-tech so own neither cell phone nor I-Pad. Pads are to stop bleeding and cover cats’ feet. But I gotta have Internet!

But Digicel breached my defenses and ruined my Internet. Old BC called the Ampersand (currently living in Canada with wife and son to avoid my influence on the child). His advice (after turning the box off and on didn’t work): “Daddy’s klutzy foot kicked a wire. Find it and plug it in.”

We filed an appeal to the eldest, SkullDougery (a.k.a. “The Computer Wiz”). After investigation, he announced that it was external. We reported it to Digicel, who took three days to show up while we suffered without Internet or cable.

We were forced to CONVERSE. Our discarded transistor radio became our round-the-clock companion. It reminded us that before we were married, I’d walk miles to visit Young BC so we could huddle and listen to music on the transistor.

When first married, we watched a tiny black and white TV with one channel. Our biggest thrill was renting movies on video tape from ‘Vunnie’ Isaacs’ (owned Jamaica’s first satellite dish) weekly.

So I couldn’t help chortling when seeing social media junkies rending garments when forced to spend six hours without FacetyBook; Instant-Gratification or Re-run (look him up; it’s comic). What would they’ve done without Internet for days instead of temporarily losing gossip centres?