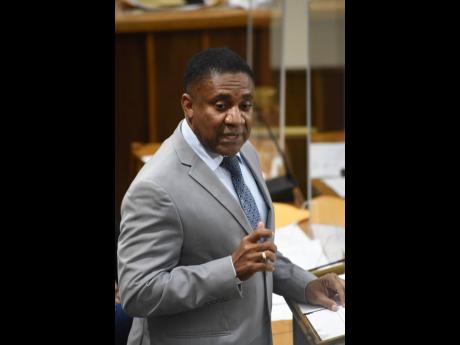 The lobbying cause is the second matter on which Mr Phillip Paulwell, in recent times, has encountered on the road to Damascus...he should be encouraged to keep on this route.

If the Integrity Commission (IC) acts on Phillip Paulwell’s suggestion – as it should – and drafts guidelines for the conduct of paid lobbyists, those recommendations should be broadened to cover legislators who promote private commercial interests with ministers and other members of parliament (MPs).

Indeed, the commission should act with urgency on the matter, sending a special report to Parliament, ahead of the next meeting of the IC’s oversight committee, which its chairman, Edmund Bartlett, had said he would schedule before the end of this month.

The current imbroglio in the United Kingdom Commons over the Owen Paterson lobbying affair – and the Tory government’s crumbled bid to save the former Cabinet minister from sanctions – underlines the relevance of Mr Paulwell’s idea and provides a useful backdrop against which to discuss a scheme for Jamaica.

The lobbying debate in the UK, and the consequences it held for Mr Paterson, also reminds of Opposition Leader Mark Golding’s bill that allows for the impeachment of legislators, which has been stuck in Parliament’s gum works since its tabling earlier this year. Prime Minister Andrew Holness should allow the bill to be sent to a joint select committee for review, or say why it is not being pressed.

Until his resignation last week, Mr Paterson was a Conservative Party backbencher, who, between 2010 and 2014, served in David Cameron’s government, first as Northern Ireland secretary, and then as secretary for the environment, food and rural affairs.

Like several of his backbench colleagues, across parties in Britain’s Parliament, Mr Paterson is a paid consultant, which is legal. What is not permitted is MPs being paid, or receiving other economic rewards, for pushing debates or raising matters with other parliamentarians or ministers. Neither must they directly lobby the government on behalf of the organisations to which they are consultants. They can, however, initiate discussions, or even debates, on matters they believe to be important and in the public interest, even if these are to some group’s commercial interest. And while MPs can pursue with ministers matters in which they have personal financial interests, that lobbying ought not to exclusively benefit that party. These actions must be logged in the Parliament’s register of interests.

Mr Paterson had meetings with officials at a government body, the Food Standards Agency, as well as with ministers, to pursue matters of interest for two firms from which, as a consultant, he received over ￡100,000 a year.

In October, the independent Parliamentary Commissioner of Standards, Kathryn Stone, determined that Mr Paterson had breached Parliament’s Code of Conduct and had failed to declare his interests in several meetings. A planned vote by the committee on standards, which was poised to accept Ms Stone’s recommendation that the MP be suspended for 30 days – thus initiating a recall petition in his constituency – was upended when Boris Johnson’s Tory government ordered Conservative MPs to vote against the recommendation.

It also proposed a new committee and a reform to integrity rules, which critics say would make it easier to get around the code of conduct. However, when Tory MPs and the press revolted, the government dropped the plan and Mr Paterson resigned from Parliament.

There are no specific rules in Jamaica’s Parliament on lobbying by MPs, whether paid or unpaid. There is, however, the general advice in the 2002 Ministerial Code of Conduct that ministers should “ensure that no conflict arises, or appears to arise, between their public duties and their private interests” and that they should avoid “accepting any gift, hospitality, or services which might, or might reasonably appear to, compromise their judgement or place them under an improper obligation”.

The Integrity Commission, with the inflow of a new crop of MPs after last year’s general election, hosted anti-corruption seminars for parliamentarians.

At last month’s meeting of the Integrity Commission’s oversight committee, Mr Paulwell, the opposition shadow minister for energy, called broadly for the regulations of people who lobby MPs and ministers and, presumably, government ministries, agencies and departments. He, at the time, did not specifically mention MPs who lobbied fellow MPs or members of the executive. He has since said he would “welcome the whole gamut”.

“Ministers should keep a register or log of all their meetings so there are records of who they have discussions with,” Mr Paulwell told this newspaper.

Jamaican MPs who operate as consultants do not have to provide a breakout of specific clients when they file their annual income and asset statements with the Integrity Commission. Mr Paulwell believes that some practical mechanism can be devised to enhance transparency.

“A lot of people lobby MPs and ministers, hoping to get things done,” Mr Paulwell said. “Some of them are paid lobbyists. But there is no system of registration, so you don’t know.”

Should Jamaica’s Parliament introduce initiatives of the kind proposed by Mr Paulwell, it would require more robust systems to determine breaches of the regime and for the censure of MPs who break the rules. The impeachment bill is a good place to start those discussions. That notwithstanding, the bill stands on its own merit.

The lobbying cause is the second matter on which Mr Paulwell, in recent times, has encountered on the road to Damascus. There was his suggestion in the State of the Constituency Debate for the abandonment of the Constituency Development Fund, and a reorientation of the MP’s role from being a deliverer of patronage and welfare, to being the promoter of development, good laws and effective policies. Mr Paulwell should be encouraged to keep on this route.