Editorial | Will states of emergency turn the tide against crime? 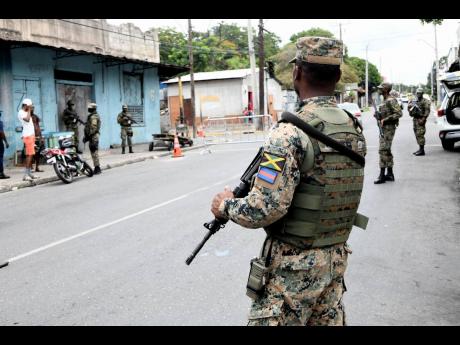 File
Security forces at a state of emergency checkpoint on North Street in downtown Kingston in 2020.

This is understandable because the Holness Administration set as one of its “most urgent priorities” the reduction of crime to make the country safe and secure. The statistics tell a dire tale: more than 1,240 Jamaicans have been murdered in 10 months despite no-movement days and nightly curfews brought on by the COVID-19 pandemic.

Crime does not just affect individuals. An entire nation is crippled, socially and economically, because criminal activities touch all lives. Safe communities attract investment, create opportunities for businesses to grow, and for people to live and make their livelihood in peace. Four decades of life under the gun has taken its toll on many Jamaican communities.

So on Sunday, we sensed an air of optimism that the prime minister was going to lay out a new deck, one that represented a comprehensive suite of new policy initiatives to reduce crime, slash the murder rate, and keep the country safer. The announcement attracted many persons on social media who were making suggestions of their own.

As it turned out, the highly anticipated crime initiative turned out to be a damp squib; Mr Holness had nothing new to offer. By reintroducing states of emergency (SOEs) in seven police divisions within five parishes, the prime minister is pinning the hopes of the nation on a strategy that has already been tried. The results then were not spectacular, but even more troubling is the fact that the constitutionality of such measures is still to be determined by a court of law. What happens if the court confirms that SOEs are unconstitutional?

The SOEs can only remain in force for 14 days and must get the support of both Houses of Parliament for them to be extended. Soundings from the Opposition People’s National Party suggest that they are not in favour of using SOEs as a crime-fighting tool, and they continue to insist that there are current resources that can be properly directed towards fighting crime.

However, someone has convinced the prime minister that SOEs will turn the tide against the current crime wave. In the same vein, Mr Holness is convinced that the police have done a fantastic job in tackling crime and that critics are harsh and simply mean-spirited. As we have said before, the numbers tell the story – 1,240 murdered so far this year means that someone has fallen down on the job. And we know where the buck stops.

Perhaps in the next 14 days we may see a reduction in murders, but then again, this is a short-term measure. All the security experts have suggested that a three-pronged crime-fighting approach that includes prevention, deterrent, and enforcement is the one that yields greatest success.

When the first round of SOEs ended in September 2020, things went back to ‘normal’ in the communities where they had been operating. The criminals still had their guns and ammunition intact, no community renewal projects had been undertaken, and the unemployed youth had no skills training. Not even the pace of garbage collection had quickened.

If Mr Holness is saying that SOEs are all he has in the toolbox, is there a way to make it work better this time around? What are the targets he has set for the SOEs? While people are locked down in communities, could there be an effort to detect and confiscate the guns, ammunition, and drugs? Is there a plan to use technology to detect these guns?

Mr Holness did not provide details of his plan, but what we have in front of us is a damp squib that carries the risk of being thrown out by the courts, which, ultimately, leaves the country in a somewhat precarious position.