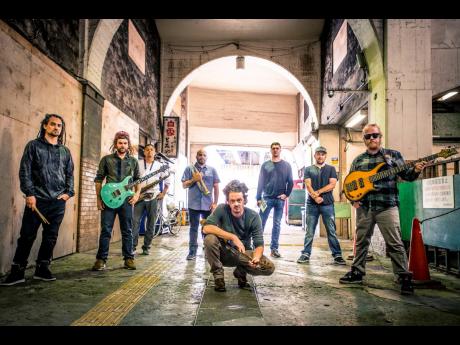 NISHIOKA_Hiroki
Members of SOJA reggae band, based in Arlington, Virginia.

It is deeply troubling the outpouring of national angst, hostility even, that has accompanied the selection of the band SOJA as the winner of this year’s Grammy, in the reggae category, for their album ‘Beauty in the Silence’.

It was only the second time in the 37 years of the award that a Jamaican did not at least have a share of the reggae Grammy, as Shaggy did in 2019 for his collaboration with Sting on 44/676. When the British band Steel Pulse won in 1987, any sense Jamaicans had of being wronged might have been ameliorated by the fact that Steel Pulse’s members are Black and mostly of Jamaican parentage. They are us.

The outrage against SOJA, as expressed in letters to the press and posting on social media, range between the band being foreign and mostly white, to concerns of cultural appropriation and a feeling that SOJA lacks authenticity. How this is so remains murky.

From our perspective, though, the whole affair smacks of a lack of confidence and a narrow-mindedness that is unworthy of the Jamaican character. Or, at least how we like to see and portray ourselves.

Jamaica is indeed the birthplace of reggae, the product of an evolution of the island’s many musical forms, including rocksteady and ska. But neither reggae nor any of the genres of music that preceded it could claim to be entirely indigenous to Jamaica, and are without influence from other sounds. The retained rhythms of our African past and the pop music of the United States have had an impact. Reggae, therefore, is something of a fine quilt; the history of its patterns is apparent only on close examination, while its seams are known to be there, but not obviously so.

It is high credit to the creative imagination of Jamaican artistes, and the strength of the island’s cultural influence, that a music that evolved in a small island of three million people has such global influence. It is this fact (helped, of course, by some effective lobbying) that was appreciated by the National Academy of Recording Arts and Sciences, a body rooted in the United States, when it added reggae to the categories of music to be celebrated.

That offer, and our acceptance was, in part, a declaration and acknowledgement that reggae transcended Jamaica. Or, put another way, the music is beyond boundaries, even though it remains a fundamental part of the Jamaican idiom. Reggae’s transcendence also assumes that even if its core remains essentially the same, it will shift and morph, and will sometimes deliver seeming anomalies.

For instance, this newspaper is not clear what it says about the music that four decades after his death, Bob Marley remains reggae’s biggest star. Or that Sean Paul and Spice were nominees for this year’s Reggae Grammy Award. Or that the syncopation in the music of many of the past reggae winners is far removed from the rhythms of Bob Marley. Yet, the accepted genre at the Grammys is reggae.

In this regard, the questions about SOJA’s supposed inauthenticity rings like an ethnocentric trope, with hints of racism. The audacity of white guys with dreadlocks to play and sing reggae and win the Grammy. This is not an observation about the quality of the songs on SOJA’s album, which, unfortunately, has not been the substance of the question about SOJA’s victory. That would be another matter. And such controversies are not infrequent, though not usually national in scope.

The question of cultural appropriation is just as fraught. From our perspective, at this distance, it does the members of SOJA a grave injustice.

The band has been in existence for nearly three decades. The name SOJA, it is reported, is an acronym for Soldiers of Jah Army – which, on two fronts, pays homage to Jamaica. SOJA gives a nod to the island’s Patois and its pronunciation of the word ‘soldier’. Being soldiers in Jah’s army suggests affinity to Rastafari and the faith’s acceptance of Haile Selassie as its divine being.

The point is, SOJA, it appears, did not just recently grab for Jamaican symbols and fetishes and make a mad dash for centre stage. We perceive nothing crude or vulgar in their playing of reggae or acceptance of Rastafari, some of whose sects long stopped being ethnic or racial monoliths.

Indeed, SOJA was on the periphery for a long time. In their acceptance speech on Grammy night they acknowledged the roots of reggae music. To deny them participation or to proscribe their right to win the Grammy would be tantamount to saying Jamaicans should not do R&B or jazz or opera, or be allowed to compete, much more win, in contests like ‘America’s Got Talent’, or Britain’s ‘The X Factor’.

The bottom line is that peevish insularity and a wish to contain how our culture is embraced is not the way of a confident and bold people. It is un-Jamaican. Or we might wish to build a fence around the island, to keep our culture in and foreign ones out.