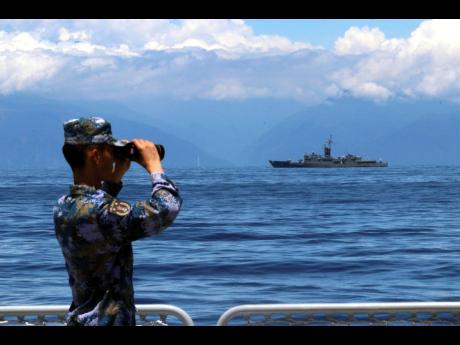 AP
In this photo provided by China’s Xinhua News Agency, a People's Liberation Army member looks through binoculars during military exercises as Taiwan’s frigate Lan Yang is seen at the rear.

Diplomacy and statecraft often require deft movements and delicate balances. Which is what the United States and China have largely been able to achieve over the last half-century in the question of Taiwan.

Sometimes, however, tricky manoeuvres are stressed by domestic political concerns that threaten to upend artfully crafted arrangements. That appears to be the case with last week’s visit to Taiwan by Nancy Pelosi – the octogenarian Speaker of the US House, and third in line for the American presidency – which sparked a furious, but predictable, response from Beijing.

The Chinese are conducting war games around Taiwan, including live naval firings in the Strait of Taiwan. Its ships and military planes have crossed what Taiwan considers to be its territory, creating the worst Taiwan/China/US crisis since 1995 when the then Taiwanese president, Lee Teng-hui visited the United States. A miscalculation by either side’s forces could trigger a real shooting match involving the world’s two most powerful countries.

In this regard, Beijing should quickly ratchet-down in operation in the Strait of Taiwan, and the United States and China should urgently return to meaningful talks that at least reassert the constructive ambiguity in the communiqués between Beijing and Washington on the Taiwan question. For while the United States has said nothing has changed in its commitments to Taiwan, Ms Pelosi’s visit to Taipei, in ostensible defiance of President Joe Biden, was, for the Chinese, a provocative crossing of a red line. It is likely to have been orchestrated for domestic political purposes.

Moreover, what Beijing reads into Ms Pelosi’s action, a more muscular posture by the United States on Taiwan, some analysts believe, may have been telegraphed in remarks by a supposed gaffe-prone president, suggesting America’s willingness to directly defend Taiwan, if China sought its reunification by force. More than once the White House walked back Mr Biden’s statements, without completely erasing the concerns about the president’s real intention.

The condensed version to this issue is that after their defeat by Mao Zedong’s communists in China’s civil war, Chiang Kai-shek’s Kuomintang nationalists retreated to Taiwan, where they set up as the Republic of China (ROC). They insisted that they remained the legitimate government of all China. Indeed, the nationalist forces harboured visions of returning to the mainland to retake the country. For the Communist Party, however, Taiwan was merely unfinished business – a breakaway region of the country to be drawn back to the national ranks.

The nationalists, though, had retained China’s seat at the United Nations. Further, the ROC was broadly under America’s security umbrella. At least twice in the 1950s the US dispatched vessels to the Strait of Taiwan to avert the mainland’s shelling of Taiwan-controlled periphery islands and deter any possibility for a broader assault by the People’s Republic of China (PRC) on Taiwan.

Early the following year, as part of US efforts to normalise America’s relations with the PRC, Richard Nixon famously visited China. By that November, Jamaica, under Michael Manley, established diplomatic relations with China. One result of the Nixon visit was the Shanghai Communiqué, which, notwithstanding its employment of some creative ambiguity in the Taiwan question, committed them seeking a peaceful resolution of the issue.

Beijing, however, not only insisted that “the People’s Republic of China is the sole legal government of China” but that Taiwan is a province of China.

Added the communiqué: “The Chinese Government firmly opposes any activities which aim at the creation of “one China, one Taiwan”, “one China, two governments”, “two Chinas”, an “independent Taiwan” or advocate that “the status of Taiwan remains to be determined”.

The US side declared: “The United States acknowledges that all Chinese on either side of the Taiwan Strait maintain there is but one China and that Taiwan is a part of China. The United States Government does not challenge that position. It reaffirms its interest in a peaceful settlement of the Taiwan question by the Chinese themselves. With this prospect in mind, it affirms the ultimate objective of the withdrawal of all US forces and military installations from Taiwan. In the meantime, it will progressively reduce its forces and military installations on Taiwan as the tension in the area diminishes … .”

Beijing apparently sees the visit by Ms Pelosi, a top-rank person in the US government, as a critical symbolic part of efforts to extricate America from any adherence to the principle of ‘one China’. In that regard, the PRC also probably believes that President Biden’s declarations that the United States would defend Taiwan if Beijing attempted reunification by force were – despite the walk-backs – part of a scheme of policy shifts, in line with the administration’s efforts to contain China’s rise as a global economic and geopolitical power.

Another possible perspective looking in at the United States is that needling China plays well at home. And it is good for the Democratic Party, which is facing the possibility of shedding congressional seats in midterm elections and is saddled with a president whose ratings are low.

On the other hand, China’s robust, and we believe extreme and dangerous, response to Ms Pelosi’s visit may be a calculation by President Xi Jinping to domestically project strength ahead of his expected bid for an unprecedented third term as head of the Communist Party and of the country. It might also be a distraction from China’s slowing economy.

In this fraught global environment, Speaker Pelosi engaged in a deliberately irresponsible bit of tail-twisting, to the delight of those who find pleasure in the drumbeat of war and assertions about standing up to authoritarians. President Xi rushed to the orchestra with cymbals and horns. The result is a discordant noise that could well drown out reason.

We, small states like Jamaica and its partners in the CARICOM, who are friends with both sides, have an obligation to warn them that theirs is not music – but noise that brings joy to no one. They should, therefore, put aside those instruments, whose music is destruction and death. They should, instead, begin a coherent conversation.