Editorial | Mr Chuck and the CCJ 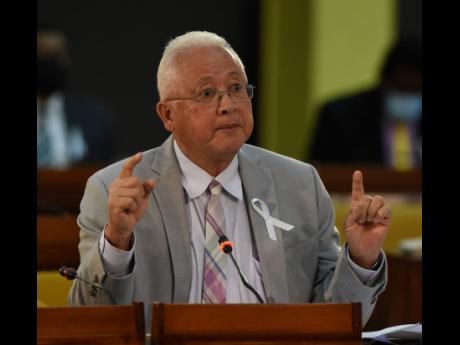 Delroy Chuck’s recent remarks about what should constitute Jamaica’s final court appears to be a contortion to avoid the Caribbean Court of Justice (CCJ), without doing much, if anything practical, to improve access to justice for more Jamaicans. The most likely outcome of Mr Chuck’s strategy would be Jamaica continuing to cling to the Privy Council.

The good thing, though, is that Mr Chuck left a crack for a possible change. He will hopefully allow reason to force that chink fully open for he and others, including Prime Minister Andrew Holness, to go through.

Jamaica has been in a decades-long debate over whether it should accede to the criminal and civil jurisdiction of the CCJ, which it helped to create and to which it is already party with respect to the court’s jurisdictions in interpreting the treaty governing the Caribbean Community (CARICOM), the regional single market and economy, of which Jamaica is a member. The court also pronounces on community law.

Last week, as Jamaica’s Court of Appeal prepared to mark its 60th anniversary – the court was established by the island’s Independence Constitution – Mr Chuck, the justice minister, reiterated his long-standing unease with Jamaica fully joining the CCJ, which he framed in a nod to nationalism.

Yet, there is no obviously compelling nationalist impulse in Minister Chuck’s approach to Jamaica’s judicial arrangements. He is, and has been, in no hurry to depart the Privy Council, a UK-based court.

In adjudicating cases from Jamaica, the Privy Council technically operates as proxy for the sovereign – Queen Elizabeth – in hearing appeals from her Jamaican subjects. Which, of course, is both philosophically and symbolically incompatible with Prime Minister Holness’ advice of the monarch of Jamaica’s intention to “move on” and establish itself as a republic.

The CCJ, therefore, is a practical alternative as a domestic final court. It operates in the same geographic and cultural space as Jamaica. Its bench is open to Jamaican nationals. One sits on it. And the high quality of the CCJ’s jurisprudence – in contrast to the calumny hurled at it prior to its launch – has been hailed over in its more than a decade and a half of the court’s existence. The CCJ is also highly insulated from the possibility of political interference. It is moot that the access of Jamaicans to the CCJ would be far easier than is possible with the Privy Council.

While recognising that Mr Chuck expressed a personal preference for a specifically nationally final court, it is useful to recall that Bruce Golding’s administration, of which Mr Chuck was a member, considered the idea, but did not believe that it would be appropriately financed.

Writing in this newspaper seven years ago, Mr Golding explained: “In my time, the Cabinet had appointed a ministerial committee to review our position on the CCJ. The committee offered the alternative of establishing our own final court. We did not sign off on that proposal, given real concerns about our ability to properly fund another court, but we put it forward for discussion.”

On the other hand, the CCJ has a sustainable funding model – a more than US$100-million trust fund, the profit from which is used to finance the court’s operations. Jamaica contributed US$27 million for the fund’s launch.

There was another significant observation by Mr Golding in that 2015 opinion article. Essentially, it was about Jamaica’s precarious perch in Britain’s judicial system, despite the occasional statements by UK officials that we can have the use of it for long as we wished.

At the time of Mr Golding’s article, Ed Miliband was leader of the Labour Party on the eve of a general election. Mr Miliband, in his campaign, warned that should he become prime minister he would, as Mr Golding put it, “discombobulate the offshore financial arrangements of overseas territories like the Cayman Islands, (which) is a clear indication of the vicissitudes of British politics to which we are exposed”.

Explained Mr Golding, at the time, “I am … concerned that even if we choose not to leave the Privy Council, it can choose to leave us, notwithstanding the periodic assurances we receive from the UK. The hearing of our appeals represents a cost to the British government that has so far survived austerity measures, but that is hardly a basis for confidence that our judicial arrangements are secure.”

Those UK economic issues that so worried the former Jamaica Labour Party premier are even more acute in today’s Britain. So, too, is the logic for acceding to the CCJ. Indeed, Prime Minister Holness need not wait for his government’s planned full review of the Constitution to act on this matter. He has all reason to be free of the legacy constraints that kept him from embracing the CCJ. He just has to grab that freedom.