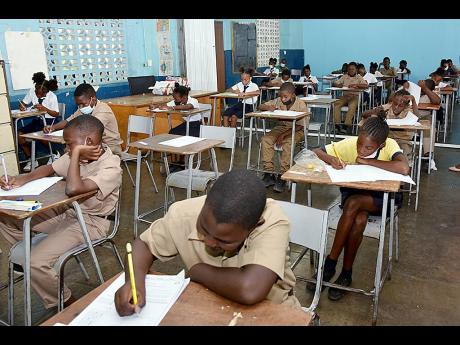 Kenyon Hemans
Fix the education of our young men. 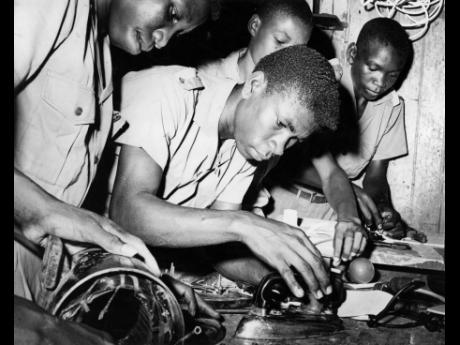 File
As a youngster, we boys were taught at home and in school that, if we worked hard, got good grades and behaved ourselves, we would get good jobs and find fulfilment in the work that we did.
1
2

A few weeks ago when this year’s CSEC results came out, we were told that boys had outperformed girls in four subject areas, with CSEC maths coming in for particular mention. Just as I was about to break out the vuvuzelas to celebrate what appears to finally be a turnaround in the academic fortunes of our boys, a small voice in my head said “Wait one second, sir. Read the fine print first”.

That’s when I came across the story of a young Guyanese boy, Ramoll Baboolall who sat and passed all of 27 CSEC subjects this year. Now, first of all, where on earth does one find 27 CSEC subjects? Secondly, where does one find time to do all of them? Not to take anything away from Mr Baboolall, but what did this youngster have to give up to sit 27 subjects? Food? Fresh air? Puberty perhaps?

But let’s get back to Jamaica and the fact that boys outperformed girls in maths, principles of business, music and theatre arts this year. What this really means is that, of the 27 subjects on offer, boys only bested the girls in four. Then, as you dig further, you realise that the mean differences weren’t so dramatic. For example, 65.6 per cent of our boys passed mathematics, compared to 64.8 per cent of girls - barely a 1 per cent difference. 82.7 per cent of boys passed Principles of Business compared to 82.4 per cent of girls. Again, not even a good 0.5 per cent between them. In theatre arts, 78.8 per cent of boys passed, compared to 77.9 per cent girls. Hardly any daylight between the two. But, thank heavens for music where boys outscored girls by a more respectable 83.1 per cent to 75.9 per cent. The future of choppa anthems is safe, it appears.

Despite these “improvements”, I am still very concerned about where our boys are headed and the future that awaits them. Girls are increasingly brighter, more focused, more qualified. Boys, it seems, are more likely to end up “chopping di line”. So much so that Director of Public Prosecutions (DPP) Paula Llewellyn recently remarked at the Jamaica Bankers Association (JBA) anti-fraud seminar a few weeks ago, that “many young men have shunned formal employment, preferring scamming as the holy grail”. To be fair, DPP Llewellyn did note, too, that more and more women, and now even entire households, were getting involved, pointing out that, of the 110 new matters listed in the Westmoreland Circuit Court’s Easter Term, about 80 were for charges of possession of identity information, the stock in trade of the scamming profession. “When you saw some of the young men coming before the court … you realise that they no longer aspire to a profession or vocation. Their aspiration is to be a ‘choppa’,” she said.

The DPP’s points are instructive. As a youngster, we boys were taught at home and in school that, if we worked hard, got good grades and behaved ourselves, we would get good jobs and find fulfilment in the work that we did. Whether you wanted to be a lawyer, doctor or Indian chief, the path to financial success and a good life was through education and discipline. Today, however, we are hearing a different tune - literally.

Today, our boys are being taught that, yes, money offers fulfilment and that work is one way to acquire money. But it is not the only way. Scamming, gang activity, stealing, corruption, extortion, even finding a rich woman, are also other ways. To be fair, these ideas have always existed, but, as the economy worsens and the nature of work changes, young men have become more desperate and less firm on what they would or would not do to make a dollar.

Combine that desperation with poor social conditions, overburdened law enforcement and justice systems, fewer legitimate income-earning opportunities and a trade awash with large amounts of easy money, and you have the ingredients of a perfect storm. Sprinkle in the false perception that scamming is a victimless, faceless crime, add a pinch of “calls for reparations now”, and a healthy serving of under-educated, recalcitrant young men and that storm is now a category 5 disaster, wreaking havoc in western Jamaica.

Let’s be fair, though. Scamming is really incidental to the corruption, criminality and violence that is embedded in and characterises Jamaica. If not scamming, some other criminal activity would have taken root simply because the nurturing ingredients are so readily available. Scamming, unlike other criminal enterprises such as the drug trade, however, has lower barriers to entry and is easier to step into. A lead sheet, a banger and some credit, and you’re off to the races.

To tackle and defeat the practice, however, is complex. Scamming has no one causal factor and so it would be foolish to think that any one thing can fix the problem. Any sort of intervention must be similar to multi-factored strategies that have been shown to be effective in similar contexts of violence, psycho-social inequalities, and persistent poverty.

In any such strategy, however, education must be the base underlayer. Without it, we cannot prepare our boys to take advantage of the legitimate opportunities which exist - as scarce as they may be. Without education, there is no fertile soil to nurture and nourish the seeds of effective public awareness and communications strategies aimed at reorienting young minds around the practice. And, without education, there is no way for strong values such as integrity, hard work and discipline to drown out the horribly infectious beats of Xklusive and Skillibeng.

Fix the education of our young men, therefore, and we will begin the long march towards fixing our other social ills. It’s a long, painful road ahead. But try listening to dancehall nowadays. There’s hardly anything more painful to the ears.