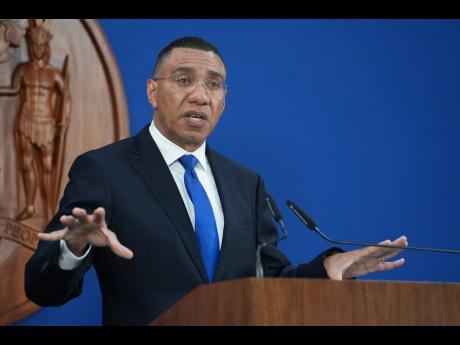 Prime Minister Andrew Holness should publicly explain the difficulties that prevent the Integrity Commission (IC) from certifying his assets declaration for 2021, as well as use the situation as an opportunity to assert his personal leadership against corruption in Jamaica.

Moreover, the prime minister (PM) should make the assault on corruption, in all its forms, the centrepiece of his legacy-building efforts, with the certitude that there are few things he can do that would so firmly secure his place in Jamaica’s history. In that respect, the PM’s explanation would also be the start of a new and open conversation around how to rebuild trust in Jamaican institutions.

Under Jamaica’s integrity law, legislators, and some public officials, have to each year disclose to the IC their income, assets, and liabilities. While the declarations are for the calendar year, filers have a three-month window, until the following March, within which to submit the documents. Thereafter, the commission may ask for additional information or for clarifications of the data provided, before certifying the filings.

In the case of the prime minister and the leader of the parliamentary Opposition, the law requires that the IC publishes in the official Gazette, and otherwise if it wishes, summaries of their assets and liabilities statements.

Last October, the Integrity Commission published a summary of filings by Mark Golding, the Opposition leader. Mr Holness’ was absent. The obvious reason is that it had not yet been certified. The Integrity Commission cannot say why because the law – the notorious Sections 56 (1) and 56 (3) of the Integrity Act – prevents the agency and its servants from speaking about its investigations unless a report has first been tabled in Parliament.

There is no reason to believe that the delay in validating Mr Holness’ declaration is for any reason other than the complexity of his accounts, given that his wife, Juliet Holness, is also a member of parliament (MP), subject to the integrity law, and a businesswoman in her own right. The Holnesses have in the past filed joint declarations.

Neither are there questions of Mr Holness’ commitment to MPs having to file statutory declarations, nor the summaries of his own and the leader of the Opposition’s being made public. In the past, he has suggested that the rule should apply to all legislators.

Given the restraint on the IC to speak on the matter, and the commission’s apparent belief that it has no reason to table a special report on the prime minister’s stalled declaration, this newspaper agrees with National Integrity Action’s (NIA) Trevor Munroe that Mr Holness should speak on his own behalf.

We do so not to promote or support voyeuristic tittle-tattle or scandal, but rather the contrary. Transparency on the prime minister’s part will halt damaging speculation and contribute to the development of trust in critical areas of national life.

Most opinion surveys regularly show that over half, to upwards of 70 per cent, of Jamaicans believe the public bureaucracy to be corrupt. Some estimates place the cost of corruption at a minimum five per cent of gross domestic product, or somewhere north of $100 billion a year.

Further, Jamaica’s score of 44 on Transparency International’s Corruption Perception Index (CPI) – a range in which it has hovered for several years – places the island among countries considered to have a serious problem of corruption.

These perceptions dribble into how Jamaicans view key actors of the State. Over 40 per cent believe that parliamentarians are corrupt, half do not trust the police, and a fifth harbour serious qualms about the judiciary.

Not only is corruption economically costly, distrust of the people and institutions who can do something about it weakens their capacity for effective action, even when legislation and anti-corruption agencies are in place to address the problem. Unless, that is, there is bold and aggressive leadership from the top. That, though, comes with a willingness to, in the short to medium term, expend large amounts of political capital.

“The cleansing and disinfecting has to start from top and go downwards in a thorough and systematic way,” Singapore’s former leader, the late Lee Kuan Yew, said in a 1993 speech. “It is a long and laborious process that can be carried out only by a very strong group of leaders with the strength and moral authority derived from unquestioned integrity.”

There is no question that Mr Holness wants a prosperous Jamaica, with a caring State that supports the most vulnerable, but in which, in the normal course of things, gains are achieved on merit. The question is about the political capital that he is willing to spend in becoming a really transformative leader, among whose missions is the elimination of corruption.

This newspaper is encouraged by Mr Holness’ remark last October that he is no longer burdened by the need to win elections and to become prime minister as an end in itself – as the statement was widely interpreted. Rather, his premiership is an instrument with which to do things.

Said Mr Holness: “It (politicking to win elections) doesn’t matter to me any more. I have to start to think about legacy: What will Jamaica be? Will it be the same as I came and saw it? I can’t let it be the way I came and saw it.”

The prime minister can count on this newspaper’s support – and the backing of all Jamaicans – for transformative action against corruption. He can start the thrust by giving the public an open and frank status report on his statutory filings with the Integrity Commission.