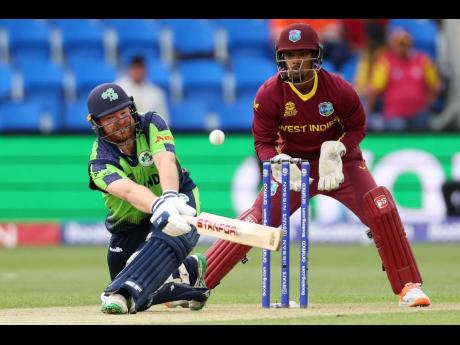 CWI Media photo
Ireland's Paul Stirling on the attack during his unbeaten 66 against the West Indies in the qualification stage of the T20 World Cup in Hobart, Australia last year. The wicketkeeper is West Indies captain Nicholas Pooran.

It may be because Cricket West Indies (CWI) has so far published only the executive summary, or that the committee hewed close to its terms of reference, the specifics of which were not widely reported. Unfortunately, the three-member group that CWI appointed to review the West Indies' humiliating early ejection from last October's T20 Cricket World Cup squandered the opportunity to shore up the underlying requirement for the West Indies' return as a cricketing power.

It isn't that the group – chaired by Justice Patrick Thompson Jr., a High Court Judge of the Eastern Caribbean Supreme Court, and including former South African cricketer, Mickey Arthur, and the great West Indian batsman, Brian Lara – didn't identify real issues or make worthy suggestions. Rather, their failure is that they propose to build superstructures on rickety foundations.

Put differently, their ideas, if implemented, may well deliver short-term gains, but are unlikely to be sustainable in the current dispensation.

The West Indies didn't automatically make the cut for the T20 World Cup. They were placed in a group of minnows who were required to battle among themselves for a place among the big guns.

They lost to Scotland's part-time cricketers, edged past Zimbabwe, then were easily dispatched by Ireland. Before returning home, the Test team was also thoroughly routed by Australia.

In the aftermath of the T20 debacle, Ricky Skerritt, the president of Cricket West Indies, promised a “thorough post-mortem” of the performance. Mr Thompson Jr.'s committee was established.

It placed the blame primarily on the underpreparedness of the team; the fact that the matches were played in cold and blustery conditions of Tasmania, with which the West Indians were unaccustomed; the absence from the team of at least one key batsman; and the longer-term poor outcomes of West Indies cricket, exacerbated by the regular loss of key players to global leagues where they enhance their earning opportunities.

“WI cricket does not lack for talent, but our small size in comparison with other cricketing nations means that we cannot afford to lose any talented players,” the committee said.

“Cricket West Indies (CWI) must develop and create clear pathways for the identification, development and management of talent. Otherwise, WI cricket runs the risk of being strip-mined by other professional leagues that can afford to harvest and develop our players for their benefit.”

Its proposed response to the crisis, and to ward off a total collapse of West Indies cricket, include: frank discussions between CWI and players to find a middle ground on each other's interests; and that in preparation for the 2024 World Cup, CWI's “director of cricket and selectors … urgently identify a core squad of 30-35 players that are likely to form the nucleus of the 15 players that will eventually form the … World Cup squad”.

These are all suggestions to which supporters of West Indies are unlikely to object.

However, judging from the report's executive summary, Thompson Jr. Committee's observations and conclusions aren't undergirded by quantitative analysis. The claim, for instance, that the region's small size limits the breadth and depth of its talent pool requires clarification.

New Zealand has a population of similar size to the cricket-playing countries of the West Indies, but has been able to sustain competitive teams, while the Caribbean has declined. Moreover, there was a time, at the height of its powers, from the late 1970s to the mid-1990s, when West Indies could, at the same time, credibly field two, or more, Test standard teams.

It would be useful to provide data-based analysis of the number of people, at various levels, who now play cricket in the region, compared to past periods, and the reasons for any change. This would better inform plans for the rejuvenation of the sport.

Further, the committee appeared to have consulted only establishment insiders, rather than a wide spectrum of stakeholders, which would have limited the perspectives they heard.

There has been one constant over the years of the collapse of West Indies cricket – Cricket West Indies, by whatever name it was called. And the territorial boards which own CWI.

As the Thompson Jr. Committee noted, the West Indies team is the only major supranational cricketing entity. That requires inclusiveness, transparency and skilled management of its fissures and tensions to close the cracks and the promotion of a wide sense of ownership of the game in the region.

Despite its sporadic jabs at inclusions, Cricket West Indies' leader of the current age has proved itself incapable of the transformative action to make it into a really stakeholder-driven broad tent organisation. It is largely propelled by, and beholden to, narrow group interests.

In the absence of philosophical underpinning that appreciates the history and historiography of West Indian cricket, there is unlikely to be the management structures that support any lasting recovery of the region's team. Which is the point that the Thompson Jr. Committee missed, and therefore left unaddressed.

Our addendum to their findings, therefore, is that in accordance with the report by Professor Eudine Barriteau, the shareholders of Cricket West Indies, the six territorial boards, should disband the body, opening the way for the creation of a broader, stakeholder-centric institution.