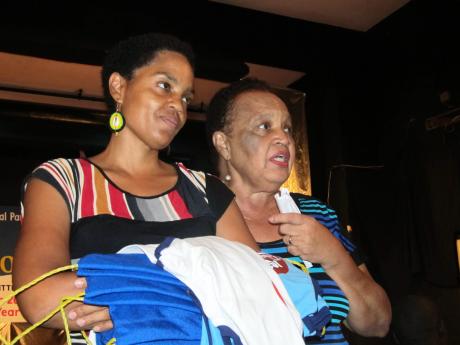 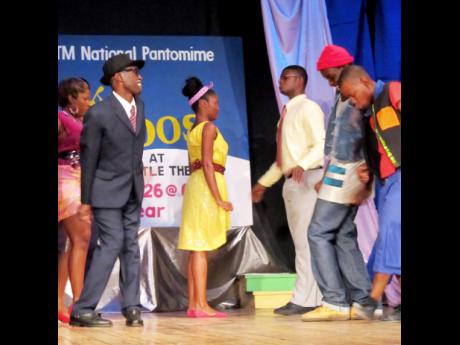 Marcia Rowe Cast in a scene from Princess Boonoonoonoos
1
2

If you ever wondered what it was like to hang several letters of 'O' on a string, think no more. Just have a look at the last word in the title of The Little Theatre Movement's (LTM) 2014 Pantomime, Princess Boonoonoonoos. And if the word triggers feelings of dÈj‡ vu, yes, you may have heard it before. The word 'boonoonoonoos' was indeed coined by the late "Miss Lou, the queen of words" - so declared Mr Justice (played by Kevin Halstead), one of the characters from the Pantomime.

Justice, along with help from his fellow villagers, also provided definitions for boonoonoonoos. It means "irie, sweet and lovely", they voiced in a competitive manner.

All this and more unfolded at the annual launch of The LTM National Pantomime 2014, held at the Little, Little Theatre on Tom Redcam Road in St Andrew recently.

With acknowledgement, definition and announcement out the way, the colourfully costumed characters segued into performing songs and snippets of scenes from the Barbara Gloudon-written script and lyrics. They teased the intimate gathering with uptempo songs and appealing dialogue.

And from the songs and snippet scenes, the plot, shy of a few scenes, looked promising. It seemed to tell the story of a girl, Lovely, who has made her yet-to-be-named village proud by passing 30 subjects, the only one to have done so.

But not all the characters are delighted. Boasie-Ann Nuffness and her daughters Pluralita and Nufeesha, who live on a hill, are not. But it will be their superficiality and love of vanity that will produce laughter, likewise, the character Rattus, who, at Tuesday's launch, stole the hearts of all.

In Princess Boonoonoonoos, Gloudon also seemed to be returning to the intriguing tale of young lovers found in some of her earlier works. This is evident in her creation of a doting admirer for Lovely. The young man, like a romantic pied piper, shows his feelings for Lovely at every chance he gets. The full story and more will be revealed on Boxing Day, the traditional opening day for Pantomime.

Before presenting the actors, Gloudon said the hardest part in writing the script was finding the balance between children and adults. But she put that challenge aside when she presented the cast, who spoke in roles, and interacted with her accordingly.

When the director, Robert Clarke, gave his remarks, he was general in his description of the play's setting. He, however, gave the assurance that "all I can tell you right now is that we are working, working, working. And that I am going to make sure that when you come on Boxing Day, we are going to give you high visibility and some contemporary sound, moves and communities like the ones you know".

The production team for Princess Boonoonoonoos was also introduced. Except for the return of Clarke as the director and Ian Hird joining the band, the production team remains, with Patrick Earle (movement), Michael Lorde (set), Anya Gloudon-Nelson (costumes), Michael McDonald (lighting), and Donavan Campbell (sound).

The official segment of the launch also included persons receiving gifts of bags and T-shirts, one of whom was Antone Hutchinson, who earned his prize by correctly answering questions on social media.

Princess Boonoonoonoos will run from Boxing Day to May 2015.